Time's up for the judge who gave "one pass" to the man who kidnapped, strangled, and masturbated on a woman. 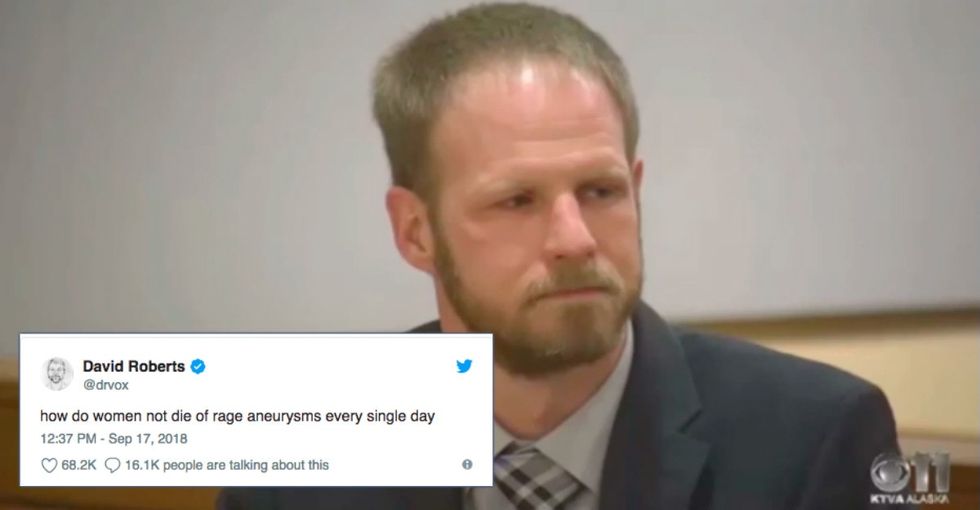 Update: Thanks to the media and advocacy groups shedding light on this miscarriage of justice, Judge Corey was voted out by the people of Alaska in November 2018. It was the first time an Alaska judge was removed from the bench due to public outcry. High five, reporters and citizens! This is how we work together to make a difference.

Trigger warning: sexual assault and everything wrong with our effed up justice system.

It’s a story that so defies justice as to be laughable—if there was anything funny about kidnapping, strangling, and sexual assault.

The story goes like this: In August of 2017, Justin Schneider approached a native Alaskan woman who was looking for a ride at a gas station. The 33-year-old husband and father introduced himself as “Dan” and claimed to know the woman. She accepted the ride.

Schneider drove away with her, pulled over to the side of the road, and told her to get out of the car so he could load some things. Shortly after she exited the vehicle, he tackled her to the ground, told her he'd kill her if she screamed, strangled her until she was unconscious, then masturbated on her.

Yes. He did. Go ahead and take a moment.

After the woman regained consciousness, Schneider handed her a tissue, I assume because that's the gentlemanly thing to do after attempting to murder a woman and jacking off over her.

Wait, sorry—he allegedly wasn’t attempting to murder her. According to police detective Brett Sarber, Schneider told the woman that he wasn’t really going to kill her—he just needed her to believe she was going to die so that he could be “sexually fulfilled.”

You read that right.

What this man did is shocking, disgusting, horrifying, and true. But he pled guilty, so he gets no jail time. WHAT?!

If the story itself isn’t enough to make your brain explode, the miscarriage of justice that came afterward will.

This incident happened more than a year ago, and during that time Schneider has been living under house arrest. Not in jail, but at home, with his family.

Anchorage Superior Court Judge Michael Corey sentenced Schneider to two years, but with a year suspended and credit for the year he served under house arrest. That means that as long as he doesn’t violate his probation conditions, he’s essentially a free man.

But don’t worry! The judge told him not to do it again, so clearly he won't.

After the judgment was passed down, Judge Corey looked Schneider right in the eye and said, “This can never happen again.”

Um, duh. Shouldn’t it have never happened at all? Isn’t this what we have a justice system for? To dispense justice for heinous things that people have already done?

The court is treating this as if it were some kind of accidental, one-time slip-up. As Assistant District Attorney Andrew Grannik said, “I would like the gentleman to be on notice that that is his one pass . . .” Sorry, his one pass??? Grannik also argued that Schneider losing his job as an air traffic controller over the charges is already a “life sentence.”

Did I mention that Schneider doesn’t have to register as a sex offender, because apparently kidnapping and choking a woman half to death so you can get your jollies off isn’t considered a sexual offense?

Every single thing about this case and the outcome is a travesty. But unfortunately, it’s not surprising.

We learned in the Brock Turner case that white men who attack women can be given a pass by white judges who either don’t understand the impact of sexual assault on women or don’t care. We also know that kidnapping, assault, and murder of indigenous women is a tragic epidemic that doesn’t get the attention it deserves.

And yes, race matters in this case. Can you even imagine what this verdict would look like if a black or native man had been the perpetrator and the victim was a white woman? Please.

“I would just like to, um, emphasize how grateful I am for this process,” Schneider said in court. “It has given me a year to really work on myself and become a better person and a better husband and a better father. And I’m very eager to continue that journey.”

“All right. Thank you, sir,” the judge replied. “I appreciate those comments.”

Isn’t that just a lovely exchange? How nice that the "process" since Schneider chose to kidnap and strangle and sexually assault a woman has been so helpful to him. No mention of the victim, who now has to live with the trauma of thinking she was going to die while having her body violated. No expression of remorse for his actions. Schneider clearly just needed to "work on himself" like the rest of us, that’s all. This was just a normal step in a normal man’s self-help journey, not the sick and twisted actions of a psycho predator sexual deviant.

And hey, Judge Corey? You do not say, “Thank you, sir” to a man who kidnapped a woman, strangled her unconscious, and then masturbated on her. You just don’t. I can't even believe that needs to be said.

It is looong past time to recall every judge who dispenses slaps on the wrist for violence against women. Buh-bye, old white dudes. Your time is up.