The judge who sentenced Brock Turner to 6 months in jail has been recalled. 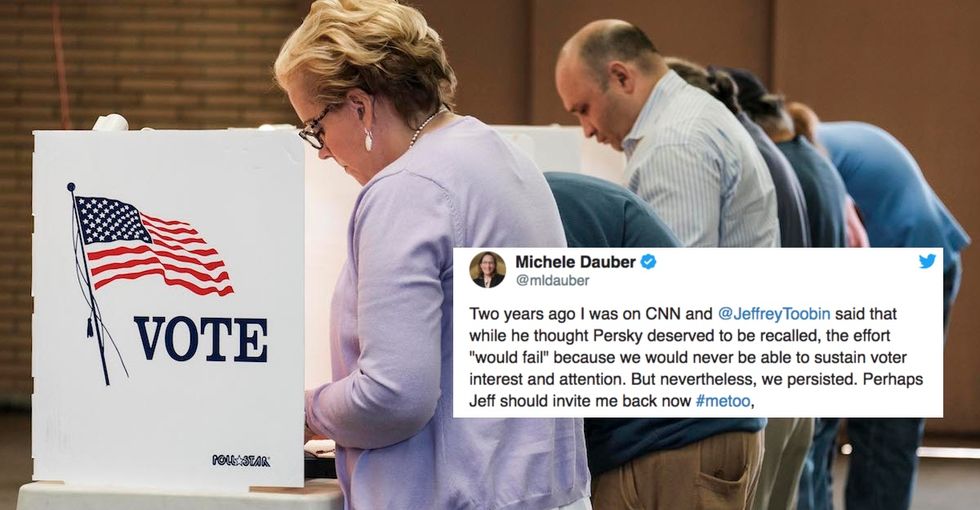 In 2016, Brock Turner was convicted of brutally sexually assaulting a woman. A judge sentenced him to only six months in jail.

Prosecutors had recommended that Turner, who'd sexually assaulted an unconscious woman, be incarcerated for six years. Judge Aaron Persky, however, sentenced Turner to less than one year in jail and three years' probation. Turner was also required to add his name to the national sex offender registry for life.

The mind-bogglingly lenient sentence sparked both a national outrage and conversations about the role that white privilege plays in the court system. Turner's case also brought into stark relief the lack of justice served to sexual assault survivors.

California voters have spoken, and Judge Aaron Persky has been recalled.

Soon after Turner's sentencing, Michele Dauber, a Stanford law professor, sociologist, and family friend of Turner's victim, launched a campaign to remove Persky from the bench.

The campaign noted that Persky claimed to have sentenced Turner lightly because alcohol had been involved and the judge feared that time in prison could have a "severe impact" on Turner. This was absurd considering the long-lasting effects that Turner's assault and trial had on the victim, whose heartbreaking impact statement was delivered in court.

"The only thing unusual about this case is that there were eyewitnesses. Otherwise it is like the millions of other sexual assaults occurring on our college campuses every year," the recall site reads. "Virtually every campus assault involves a high-achieving perpetrator and the vast majority involve alcohol. This sentence implies that prison would never be appropriate in most campus assaults."

In June 2018, California showed it was listening. At a time when the #MeToo and #TimesUp movements were surging forward in holding people accountable for sexual violence, it felt only right that voters chose to recall Persky from the bench.

Though the state now imposes mandatory sentences for assaults on people who are intoxicated, unconscious, or otherwise unable to give consent — thereby closing the loophole that allowed this ruling — Persky's recall is not only a step toward justice but a clear message the voices of sexual assault survivors must and will be heard.

Persky's recall is California's first in 86 years. And it's historic for much more than that.

While California has allowed its residents to recall judges by popular vote since 1911, the last time it happened was 1932. Today, it's a reminder that those in power aren't immune to the consequences of their actions. The recall is a loud signal that votes matter. They're changing the way the legal system handles sexual assault — an issue that's been ignored and stigmatized for far too long.

"The vote today — if the numbers hold — is a vote against impunity for high-status offenders of domestic violence and sexual violence," Michele Dauber told The Mercury News. "This victory is not just for Emily Doe, but for girls and women everywhere."

Persky's successor is also likely to bring change to the courts. According to recent statistics from California's judicial branch, the state's judges are overwhelmingly male and white. Cindy Hendrickson, who beat out opponent Angela Storey in the nomination to fill Persky's seat, is committed to representing all citizens of her jurisdiction and has a history of working with clients from marginalized groups.

The recall is an important step, but there's still work to be done.

It's easy — when it feels like justice has been served — to step into a space of complacency. But progress won't happen unless it's spurred forward by action. That's why it's so important that this recall be seen not as a culmination but as one point on the ever-evolving path to progress. There's still so much work to be done to end sexual violence. Let's never forget the tremendous power our voices have.

Two years ago I was on CNN and @JeffreyToobin said that while he thought Persky deserved to be recalled, the effort… https://t.co/L35JGjmxD3
— Michele Dauber (@Michele Dauber)1528275483.0