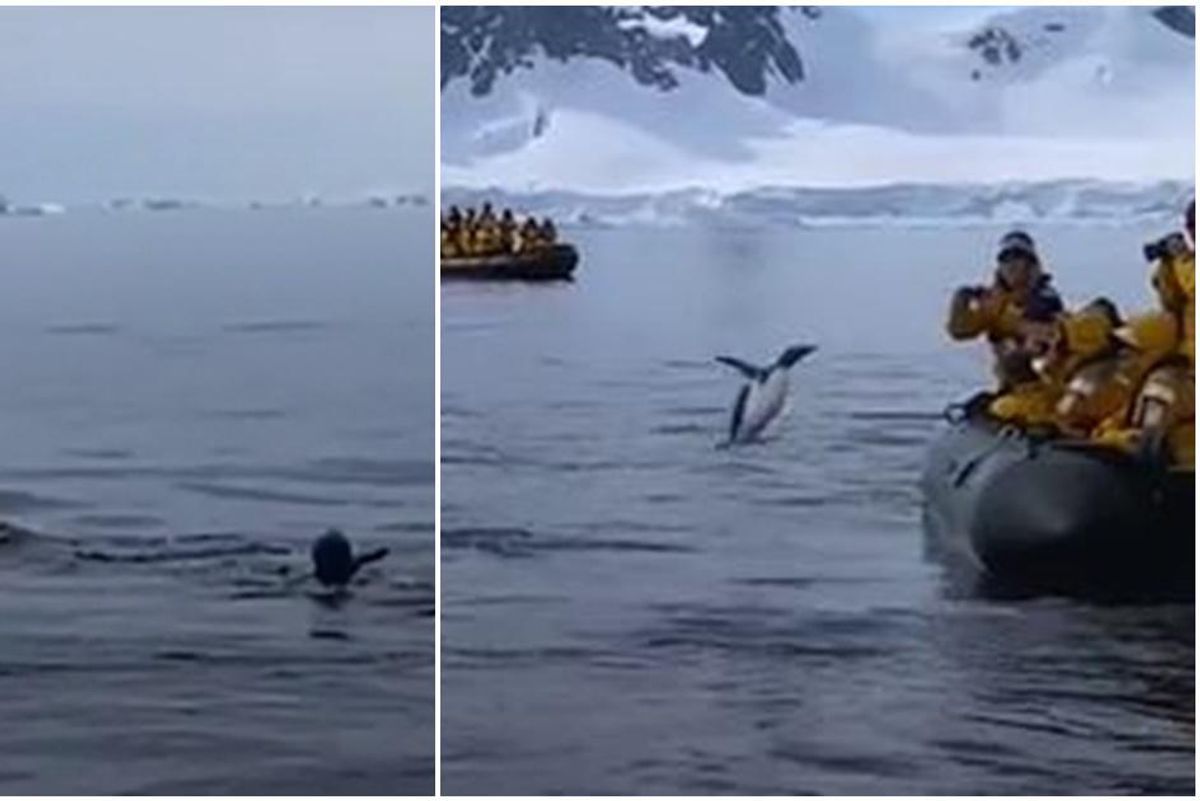 Matt Karsten, 40, witnessed an incredible example of the intricate dance between predator on prey recently while on a dinghy with his wife in the Gerlache Strait, near the tip of Antarctica.

Lucky for us, they caught in on video.

The travelers were touring icebergs when they saw a pod of whales playing in the water beside them. "They swam right up to the camera and said hello," Matt Karsten said according to the New York Post.

However, the whales' attention was quickly diverted when they saw a penguin swim by.

This began a chase where it appeared the penguin had little chance of survival. But it saw a nearby zodiac and attempted to make a flying leap out of the water into the boat to evade the hungry whales. It narrowly missed getting inside the boat on the first attempt but that didn't stop it from making a last-gasp effort to save its life.

After the penguin made the miraculous leap into the zodiac, it rested on the boat for a few minutes until it thought it was safe to get back into the water. The whales continued to follow the boat for a while but eventually swam away.

"After cruising for a little bit, the penguin said goodbye to the boat and hopped back into the icy water," Matt Karsten said.

The brave penguin is a great example that we can all follow, if at first, you don't succeed, try, try again. Then again, that if you're about to be eaten by killer whales, you have all the motivation you need for another attempt.

From Your Site Articles
Related Articles Around the Web
nature
Cities

Imagine if you were driving around, saw the flashing lights of a cop car behind you, and didn't immediately think you were in trouble. What if your first thought was that someone was here to help instead of giving you a ticket.

Police in Denver, Colorado have a new program designed to improve public safety as well as the relationship between the police and those they serve and it's something everyone can get behind. Instead of issuing tickets, officers will now have the option to hand out $25 gift cards in situations where people are pulled over for minor "fix-it" violations.

Keep Reading Show less
justice
Get stories worth sharing delivered to your inbox
By signing up you agree to Upworthy's privacy policy.
Trending Stories
nature
Nature