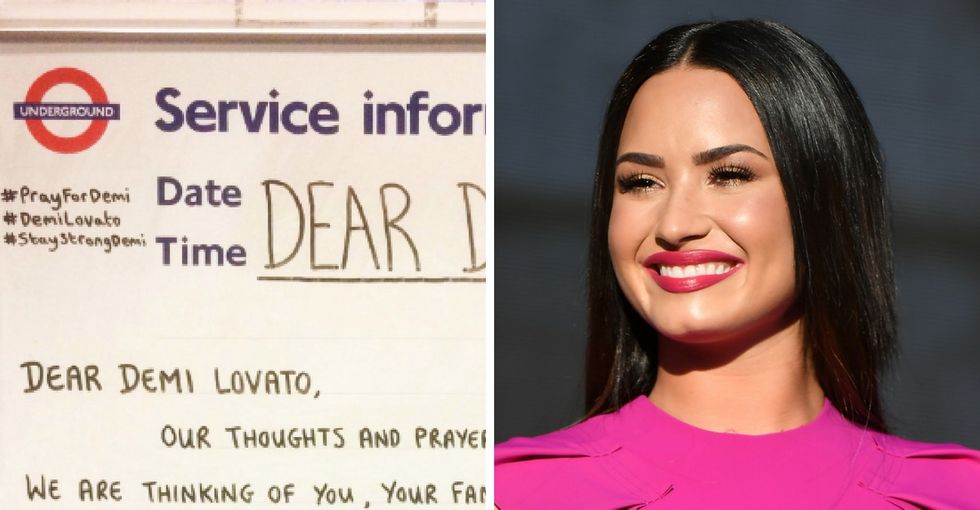 On Tuesday, July 24, singer Demi Lovato was hospitalized in Los Angeles reportedly due to a drug overdose.

Hours after initial reports surfaced, a spokesperson for the artist released a statement saying, "Demi is awake and with her family who want to express thanks to everyone for the love, prayers, and support."

Messages poured in from around the globe, sending Lovato well wishes and positive thoughts. One of those messages came from the London Underground — and its sentiment is radiating with fans everywhere.

The heartfelt letter, written to Lovato on a service information board in London's Underground, says what so many people are feeling right now.

The letter, which channels a few of Lovato's songs, like "Skyscraper," "Gift of a Friend," and "Tell Me You Love Me," reads in full:

Our thoughts and prayers are with you. We are thinking of you, your family and friends, and all of your fans around the world too.

May a skyscraper of strength help you to recover. When it comes to mental health health, we all need each other; may the gift of a friend get you back on the mend. Give your heart a break, there's no need to pretend.

You don't have to say, 'tell me you love me.' Demi, we most certainly do. You are a light in this world, and through the darkness, we are praying that you shine through."


The letter was written by the group All on the Board — a London-based group that pens clever, funny, or (in this case) heartfelt notes on service boards in the city's underground transit system. Lovato's letter, the group confirms, was written on a board at North Greenwich station.

Many of Lovato's fans replied to the kindhearted sign and tweet, which has garnered more than 4,000 likes at the time of this writing. "I almost cried reading this," one Twitter user wrote. "SO BEAUTIFUL. Thank you so much."

It's telling that the world's responding to Lovato's hospitalization not only with an outpouring of love but with admiration and an acknowledgement of her strength.

Many reactions, much like actress Lili Reinhart's, comment on what a positive difference Lovato has made simply by being open about her own struggles — whether it be drug abuse, depression, addiction, or body image issues.

Reinhart said Lovato has been "an idol to me in how she spoke so openly about mental health."

Thinking of you, Demi. ♥️

"It's what we're leaving to our kids."

Don Bay has been in the citrus business for over 50 years now, and according to him, his most recent growing endeavor has been the most challenging. Alongside his son Darren and grandson Luke, Don cultivates Sumo Citrus®, one of the most difficult fruits to grow. The Bay family runs San Joaquin Growers Ranch in Porterville, California, one of the farms where the fruit is grown in the United States.

Sumo Citrus was originally developed in Japan, and is an extraordinary hybrid of mandarin, pomelo and navel oranges.

The fruit is temperamental, and it can take time to get a thriving crop. The trees require year-round care, and it takes five years from seed to fruit until they're ready for harvest. Thanks to expert citrus growers like the Bay family though, Sumo Citrus have flourished in California. Don and his son Darren worked together through trial and error to perfect their crop of Sumo Citrus. Darren is now an expert on cultivating this famously temperamental fruit, and his son Luke is learning from him every step of the way.

"Luke's been involved as early as he could come out," Darren said in a YouTube video.

"Having both my son and grandson [working with me] is basically what I've dreamt about," said Don. "To have been able to develop this orchard and have them work on it and work with me — then I don't have to do all the work."