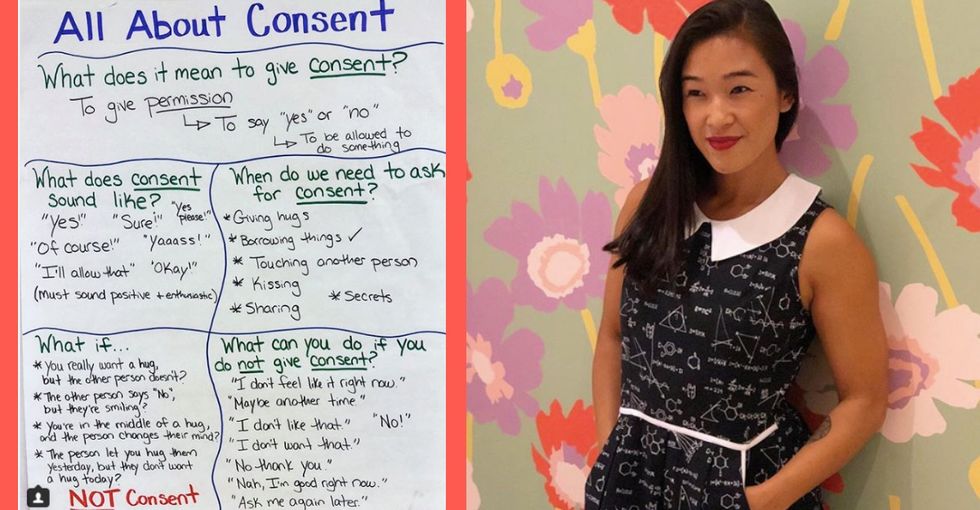 This article originally appeared on 10.08.18

She talks about what consent looks and sounds like. She explores when consent is needed in a way that's appropriate for the age group. She also addresses some of the “What if" questions kids might raise, such as “What if the other person says “No," but they're smiling?" or “What if the person wanted a hug yesterday, but doesn't today?" and gives kids alternatives for what to do if consent is not given.

“Everything about Kavanaugh in the news has been making me HEATED," she wrote on the social media accounts she keeps for her website, Teach and Transform. “So whenever I get frustrated about the state of our country, it inspires me to proactively teach my kids to DO BETTER. Today was all about CONSENT. We even explored the grey areas, like if someone says “yes" but their tone and body language really says “no." Role playing is a great way to reinforce these skills, but they MUST be taught explicitly!"

“For a lot of adults, the idea of addressing consent with children is alarming because of the relationship between consent and sex," Kleinrock wrote in an article on Tolerance.org. “However, it's important to break down the concept of consent regarding boundaries, comfort, physical interactions and mutual respect before even getting into the subjects of sex, romantic relationships or toxic masculinity."

She and her third graders brainstorm situations that might call for consent, and explore the “gray areas" that sometimes trip kids—and adults—up. For example, what if someone's body language is saying something different than their words? What if someone is hesitant in their response?

Kleinrock also points out that it's not all about someone's physical personal space. “Students giggle and contribute ideas such as giving hugs and kisses," she said, “but also state that it's important to ask for permission when it comes to sharing and borrowing items from another person. One child proclaims, 'And telling secrets! You have to ask permission to tell someone else's secret!'"

Kleinrock has now added “secrets" to her lessons on personal safety and boundaries.

The student who said “secrets" were something that needed consent to tell was partially right. But that message can be problematic for kids who have been violated and told to keep it a secret.

So Kleinrock has added a lesson about when to keep a secret and when not to. She points out that things like hate speech or doing something dangerous or inappropriate are not things to keep secrets about, whereas fun surprises or someone's personal business—like a kid's parents getting divorced—are secrets we shouldn't share.