This mom's viral post perfectly explains the importance of having mom friends. 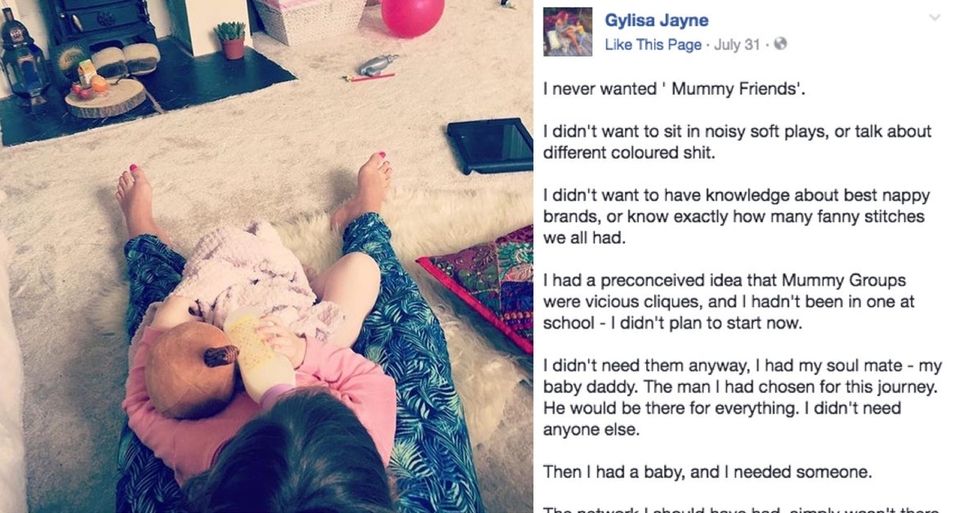 It's a common scenario for too many new parents, usually moms:

The baby is here. Yay!

Those first couple of weeks are a magical whirlwind. It's hard, but exciting as you start to become a new kind of family.

But pretty soon, monotony sets in: feed the baby, change the baby, put the baby down, try to clean up or catch up on sleep (never both), repeat.

Visitors come and go, but mostly the days can be lonely. Repetitive. The same.

One mom recently opened up on Facebook about having a hard time with the transition, and about the "mom friends" she didn't know she needed.

Or "mummy friends" as she calls them.

Gylisa Jayne explains in the now viral post that she never wanted to be in a mom clique, sitting around talking about brands of diapers and the hottest educational toys for babies. It all just seemed so ... cliché.

But being a mom turned out to be harder than she thought, and despite her husband's best efforts, Jayne longed for someone who understood exactly what she was going through a little better:

"The ones that had been there, done that. The ones that were fumbling through for the first time — just like me. ... The ones proving you didn't need to lose yourself along the way. That you'll find a new you as you go.

The ones who needed me just as much as I needed them.

I made them laugh, and they made me howl with our observations of this bizarrely fabulous and horrendous journey.

There was no clique, just women loving women — despite what you might have heard.

I had love left over for my partner again then. Because he might not get it — but there were scores of women that did.

I never wanted ' Mummy Friends'. I didn't want to sit in noisy soft plays, or talk about different coloured shit. I...

More than half a million American women will suffer from postpartum depression this year.

That's an extremely conservative estimate, with so many more new moms not reporting symptoms or merely not recognizing them. Even putting aside medical diagnoses, being a new parent is just damn hard, and we all need a little help getting through it.

Jayne writes that anyone looking to grow their support group should be open to meeting new friends online.

"My first ' mum group' experience was actually all online through Facebook," she writes in a message. "We are going to meet for the first time this year, and they were the ones that were there through all the early days. Without those ladies I don't know how I'd have coped."

She adds that dads, of course, need support too.

"It's a massive taboo for men to even talk about their struggles and even more so in fatherhood," she says. But that shouldn't stop them.

So get out there, new parents, and find someone who gets what you're going through. Just because you have someone else to take care of now doesn't mean you should stop taking care of yourself.