They felt like losers in their youth — but that's how these couples met later in life. 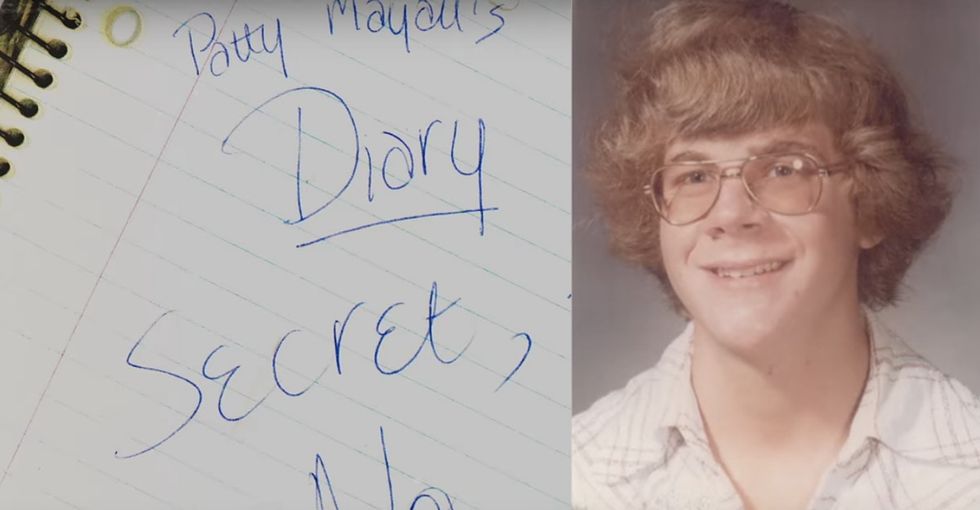 It was Valentine's Day 2006, and 32-year-old Neil Katcher was standing on stage reading poetry he'd written in high school.

This was part of "Mortified," a hilarious stage performance where adults could come together and share their most hilariously embarrassing and angst-filled moments from adolescence, usually in the form of diary entries, poetry, or chat transcripts.

On that night, Neil was reading a selection of love letters that, as an awkward teenager, he'd been too afraid to send out of fear of rejection.

After the show, a woman named Christine came up and introduced herself to him. "She was wearing 2-inch heels and she’s already like an inch taller than me. So she was like towering over me and I had no idea she was flirting with me," he told Upworthy over email.

The rest was history, and their first child turned 3 last year.

Neil, Christina, and their little guy, in 2013. GIF from "Mortified Nation."

"It’s kinda fun that this love letter I wrote as a kid — where I wore my heart on my sleeve — ended up getting the very thing I wanted — a girlfriend/wife — only 15 years later," he said.

Of course, that wasn't the goal when he started "Mortified" with his friend, David Nadelberg, back in 2002.

They never expected the project to expand into podcasts, books, documentary films, and a television series, with live-performance chapters spanning three continents. And they certainly never thought so many people would find love along the way.

The first time that Sara Faith Alterman read at "Mortified," she looked into the audience and saw a woman from her high school staring back.

Sara was already exposing herself by sharing tumultuous stories and poems about her on-again-off-again high school sweetheart.

But seeing someone who actually (kind of) knew the person that she was back then? That made the whole thing even harder.

"She hadn’t been the nicest kid, so exposing my teen musings and insecurities in front of her felt really terrible," Sara said.

One year later, she returned to the "Mortified" stage. And this time, she made a passing joke about seeing someone in the audience that was actually present for the teenage trauma she was talking about.

A man named Sam used the same angle when he approached her after the show. "Hey, we went to high school together!" he said.

As Sara remembers it:

"I thought he was just joking to hit on me. I didn’t mind, because he was really cute. But he was serious. And it took me a minute to recognize him because we only knew each other through peripheral social media connections. I’d been a year ahead of him in school, and we’d run in completely different circles: I was in jazz choir and the drama club, he loved camping and skiing.

I fell in love with him immediately."

That was nearly 10 years ago. Today, they're married and live in the Bay Area — though Sara still produces the Boston and New England chapters of "Mortified," back where she grew up.

"My husband thinks I’m crazy for remaining affected by high school. I think he’s a robot," she said. "And our baby is basically a crazy robot, so that makes sense."

Anne Jensen-Smith and her husband, Adam, were both already entangled in the "Mortified" world when sparks began to fly between them.

Anne had been co-producing the Los Angeles chapter's live performances, alongside co-founders Dave and Neil. At one point, they decided to bring in a house band to accompany performances — and Adam just so happened to be the leader of the band.

That's what got them talking. The first time they went out alone together was after a "Mortified" performance — on Valentine's Day. "Adam and I talked all night long about our upbringings, our high school experiences, most embarrassing moments after that 'Mortified' show nine years ago," she told Upworthy.

"Now, nine years, one marriage, two kids, two dogs, and one major move (to Texas) later, we decided to open a 'Mortified' in Dallas where, once again, I am the producer and he is the band leader."

Anne in middle school, on the left, and today with her husband, Adam. Photo used with permission.

"The charm of 'Mortified,' and why I think it brings so many couples together, is that it immediately disarms you," Anne said.

"[It] makes it cool, funny, and most importantly it makes you feel OK to talk about that most vulnerable time in your life," she added. "One doesn't often open up like that on a first date, or even a fifth or tenth date, but watching 'Mortified' can really inspire someone to share the tenderness of one's adolescence."

Sara agrees. "'Mortified' gives people a platform to lay their deep-seated dreams, insecurities, and secrets all out on the table. It’s exhilarating. It’s cathartic."

But the most important lesson to take away from "Mortified"? It's that despite our terrible teenage memories, we ended up OK after all.

As a performer in the "Mortified Nation" documentary put it:

"Having the audience with me, kind of cheering me on, is a remarkable thing. Because I didn't have that when I was teenager. I didn't have anybody saying 'aw' when I was getting picked on. That's a really powerful shift."

It is a powerful thing to reclaim your past humiliations, when you were young and naive and worried about everything. Imagine how your high school self would have felt if you had known that it would all turn out OK — or even better — and that your heinous high school poems about your sexy sophomore math teacher could lead you into the arms of the one you'd spend your life with.

For some people, that could make the difference between life and death.

Maybe if I'd known where I'd end up today, I wouldn't have felt so tortured back then. But then I probably wouldn't be where I am — which is writing this story before I go on stage at "Mortified" to sing a song I wrote more than half my life ago.

The refrain? "Somehow it'll all turn out right."

Me at "Mortified," probably singing "@#$% You, Hotchkiss Lane" or "Love Song in the Key of Amateur" or some other incredibly angsty adolescent anthem that I penned in my punk rock youth. Clearly I haven't changed that much.