These 7 rescue pets are taking the Internet by storm thanks to a special photo shoot. 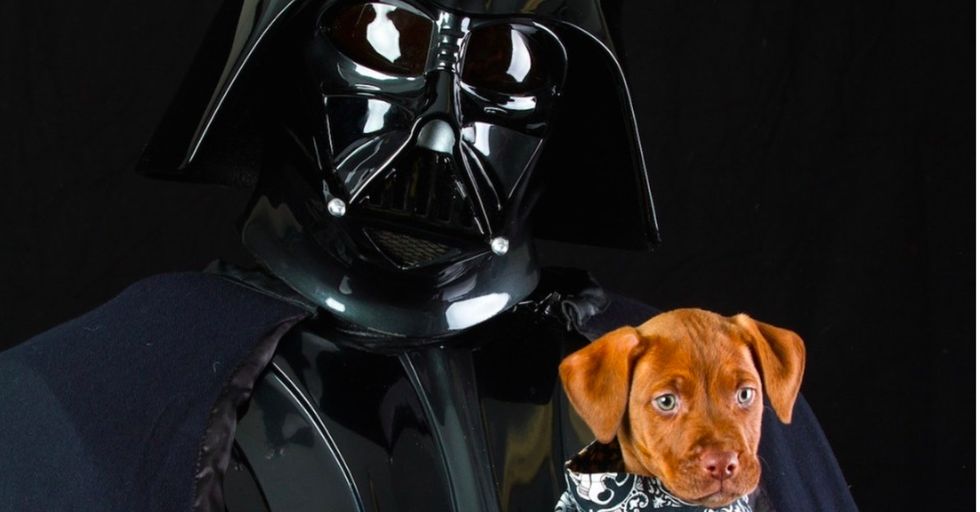 The Ottawa Humane Society has teamed up with the Capital City Garrison to produce a photo series titled "OHS Meets Star Wars: The Furs Awaken."

This is the second time they've done a series like this. The concept is simple (and squee-worthy): pose badass "Star Wars" characters with cute, fuzzy dogs, cats, and guinea pigs. Then share the photos with the Internet, and watch as the adoptions roll in.

The project was started by Rohit Saxena, a five-year volunteer photographer for the Ottawa Humane Society and a member of the Canada-based international "Star Wars" costuming organization the Capital City Garrison.

Members of the Garrison regularly dress up as "Star Wars" villains for charity events under the slogan "Bad Guys Doing Good." Saxena thought photos juxtaposing the villains with pets in need of homes would help the cause and find them their forever homes. Saxena also invited the Rebel Alliance to provide some "Star Wars" heroes for the show.

"I think there's a lot of fun stories to be told about shelter animal adoption," Saxena told Upworthy, explaining that by using the "Star Wars" characters in the photos, they're able to "bring in people who may not have been previously considering that avenue."

1. Saxena took care to group characters and pets by theme, such as pairing Chewbacca with a fluffy shih tzu "who might be a distant relative."

Chewy the Wookiee with Sage the shih tzu. Photo by Rohit Saxena, used with permission.

3. For any guinea pig fans out there, Saxena paired this lil guy with his closest Star Wars counterpart: an Ewok.

An Ewok and Chloe. Photo by Rohit Saxena, used with permission.

4. Tusken Raiders often keep to themselves. Who better to understand that than a cat?

5. Jawas aren't known for their emotions, but anybody would be thrilled to have a canine companion like Doyle.

A Jawa and Doyle. Photo by Rohit Saxena, used with permission.

6 and 7. And even the fiercest Stormtroopers need some love. Bonus if that comes from two guinea pigs.

The project was immensely successful, getting every single pet in the project's first photo series adopted.

All the pets featured in OHS's first series were adopted, according to the shelter, but the cute, cuddly critters featured in this second series are still available for adoption.

The problem of overcrowded shelters is much bigger than the Ottawa Humane Society. 7.6 million pets enter animal shelters in the U.S. every year, and in 2014, Canadian shelters took in 85,000 cats and 38,000 dogs.

Clearly, there's a large need for people willing to give these animals a safe, loving home. Too many people are still purchasing their pets from breeders and pet shops (who often get them from cruel puppy and kitten mills) rather than adopting pets from shelters.

"We want people to be aware of the great work being done at their local animal shelters and to support their local shelters by adopting, donating, or volunteering," Saxena said.

"Our role in the community at the Ottawa Humane Society is to make people think about how these animals can fit into their own lives," Natalie Pona, communications manager at OHS, added.

She says that the adage "Pictures are worth a thousand words" rings true as people are more likely to respond to creative photos of the pets at the shelter.

Using pictures to draw in the massive crowd that's interested in "Star Wars" is not a bad place to start at all.

The "furs" is with them, indeed.