The woman leading this world-renowned orchestra is one of a kind. She's so fun to watch.

I'm not used to seeing a woman in this job, and it's so fun to see. 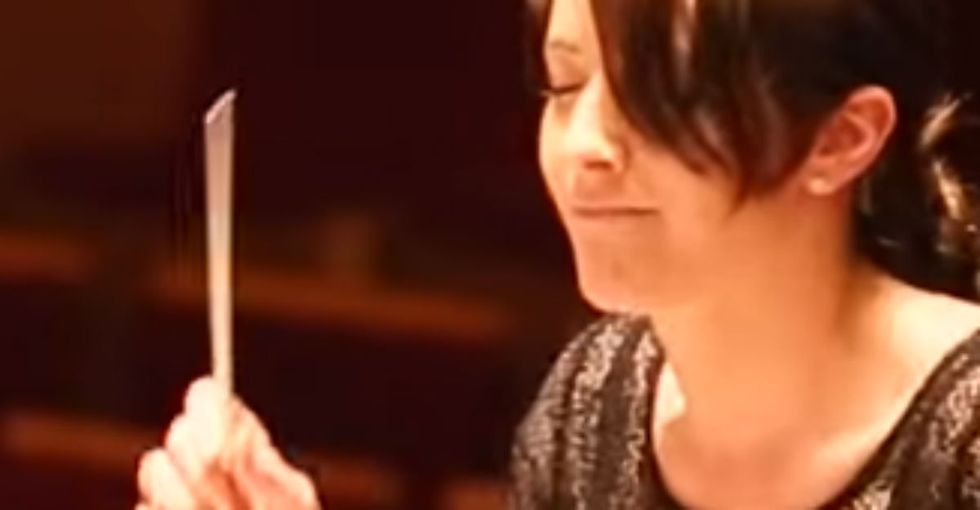 It's not a word that's used very often. Less than a dozen women lead major U.S. orchestras. Which is why I'm stoked to introduce you to Alondra de la Parra!

Maestra de la Parra first caught my attention in a video of her conducting.

It was spellbinding! I could just feel her zippy joy for life and love for her job.

So, of course, I had to find out more!

Turns out she was just appointed, at 34, as the music director of Queensland Symphony Orchestra in Australia.

And de la Parra? She's pretty happy about it, too: "It's something very exciting because I have been preparing and working all my life, to be director of a fine institution. ... It's definitely a dream come true."

With moves like this, you better believe she was up to some truly awesome things well before she got the Queensland gig.

De la Parra started her own orchestra in NYC at age 23 — the Philharmonic Orchestra of the Americas — to showcase young performers across the Americas.

Classical music has always been a little Euro-centric, so forming an orchestra that highlights non-European talent? That's a really cool way to change perception in the classical music world.

What else was she up to?

De la Parra's own classical album made it to the top 10! NBD.

The first album she conducted, "Mi Alma Mexicana" ("My Mexican Soul"), was in the top 10 on the U.S. Billboard Classical Chart in 2010. It was also the first classical recording in a decade to go platinum in Mexico, just two months after its release.

And she frequently works with Plácido Domingo, who's a big fan of hers.

She's got an amazing passion for music, and she's kiiiinda not here for your labels.

When asked about being a female conductor, here's what she said:

No, but seriously. Not here for those simplistic labels:

"I am a woman, I am a Mexican but that is just part of the many ingredients that make me who I am. It's more three dimensional than the particular labels."

Her reasons for loving conducting? You know, just the stuff that could lead to world peace.

"There's probably nowhere else in the world where you can share with 100 people something so precious and harmless and noble at the same time, with everyone. I don't think there's another activity where there are so many people engaged in something so pure and good. Simply good."

And she's spreading those good conducting vibes around the world. In 2003, she started a music program in schools in Harlem and Washington Heights, NYC.

Through this program, she's taking music down to the level where kids — even those with no music background — can participate.

"It ends where the kids actually compose a whole piece for orchestra, even kids who don't know how to read and write music. They do it by instinct, by singing and drawing and clapping."

Where are all the people who want to be involved in music? I must find them!

Based on de la Parra's thoughts about the skills orchestral music brings out in humans, the world definitely needs more of it:

"Anyone who knows how to play in an orchestra, and has been part of one, gets tools for life. Teamwork. Giving part of yourself for the other. Listening. Opening your ear and soul to take in everybody else's sound and ideas. Creating one unified idea. "

Um, can we get our politicians to play in an orchestra?

De la Parra knows that being yourself is the best thing you can do when it comes to conducting....

"We bring to the podium everything that one is. ... One can only be who one is and nothing else, it's the experiences of your life that you share with others."

"I don't think there's any way that anyone can do wrong with good music. It's the concept of let's all get together and do something beautiful together. It's already a human statement that I think is unparalleled."

This move can only be described as "catch a bug and smile about it" — and it's great.

And if you wanna listen to her orchestra while she conducts, here's your chance!