The way these hundreds of sea turtles were rescued is nothing short of inspiring. 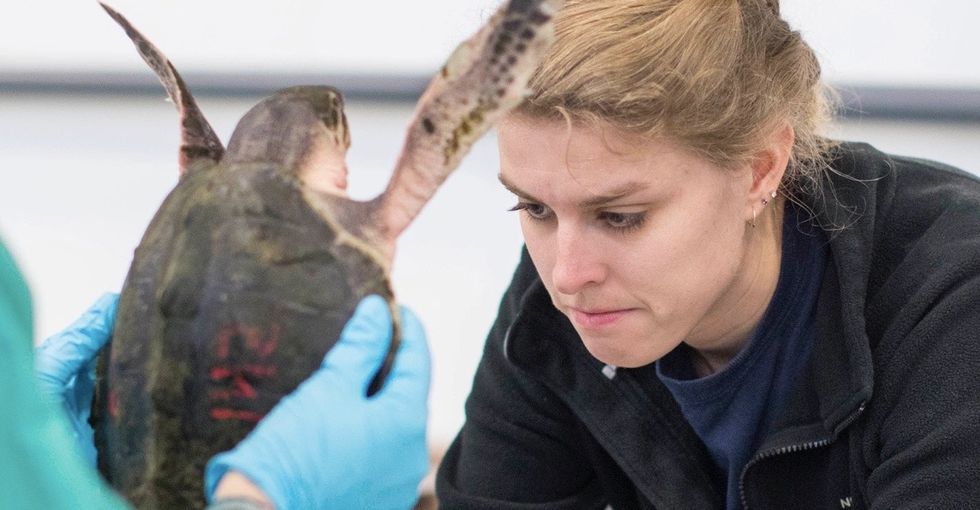 When I was little, my mom and dad would alway stop the car if they saw a turtle on the highway. If it was safe, one of us would run out, pick the little critter up, and try to help get it to where it needed to go.

This turtle airlift is basically that... times a hundred.

Every year, a combination of strong currents and winter temperatures trap hundreds of Kemp's ridley sea turtles in Cape Cod Bay, off the coast of Massachusetts.

The turtles are blocked from leaving by the bitterly cold waters of the North Atlantic. But the bay isn't exactly warm either. As temperatures drop, the chill slowly robs the cold-blooded creatures of their strength until they're stranded, half-paralyzed at the surface of the water, and at the mercy of the wind and tides.

A Kemp's ridley sea turtle swimming at a turtle hospital in Quincy, Massachusetts.

In order to help, hundreds of human volunteers braved cold November winds, patrolling the beaches for exhausted turtles who'd made it to shore.

One pair, 12-year-old Charlie Marcus and his father Peter, an intellectual property rights attorney, even flew out from Los Angeles to help. It was important to Marcus, who'd grown up around Massachusetts, that his son get to participate in the experience.

“Understanding the full spectrum of life is something I hope to teach my children in a way they don’t teach in school,” Marcus told the Cape Cod Times.

Once rescued, the turtles went to the New England Aquarium's special turtle hospital in Quincy, Massachusetts.

The hospital says that over the course of the month, they received over 180 turtles from volunteers and rescuers. Once at the hospital, the chilly little reptiles could relax and regain their strength in warmer water and under the watchful eye of veterinarians and researchers.

These 180 rescues are especially poignant as Kemp's ridley are the most endangered of all the sea turtles. They usually like to live in warmer waters around the Gulf of Mexico, not chilly Massachusetts.

They're also the smallest species of sea turtle — adults only grow to be about two feet long. Compare that to the mighty leatherback, which can top out well over seven feet!

A worker gives a sea turtle a check-up. Some of the turtles are very sick when the come in and may need special care.

Being released back into the wintry waters of Cape Cod Bay could kill them, so instead, some of the turtles are being given a lift south to warmer climes.

Repurposed banana boxes and towels served as ersatz cabins for the little guys.

Once safe in their boxes, the turtles were then loaded into a van...

Some sea turtles can weigh more than 1,000 pounds. Luckily, these guys are considerably lighter.

And then driven out to the airport, where volunteer pilots were ready to fly them south.

On Nov. 29, pilot Jamie Gamble and his 20-year-old daughter Shelby used this little prop plane to shepherd turtles down to North Carolina.

One plane was flown by volunteer pilot Jamie Gamble and his daughter Shelby. They took the turtles on a four-hour jaunt down to North Carolina. Another was flown by pilot Steve Bernstein, who transported 30 of the little guys to Baltimore. Bernstein says that sea turtles apparently make for very polite passengers.

“I don’t get to hang out with them too much,” Bernstein told the Boston Herald. “They’re just kind of convalescing in their banana boxes. But they are kind of cute."

Once in the South, the turtles will spend some time in rehabilitation centers before hopefully being released into the wild.

As the weather gets even colder, the turtle hospital warns that even more sea turtles might end up needing rescuing. Luckily, there will be humans there to help get them where they need to go, like the Gambles and Bernstein, the hospital's staff, and Charlie and Peter Marcus.

“He’s got that empathetic gene," Marcus said about his son. Since he was little, Peter said, Charlie's been interested in helping animals. In fact, his bar mitzvah charity project was all about saving sea turtles.