The ocean is full of crime. And the only ones saving the day? Not even law enforcement.

You think you know the ocean, but you have no idea. 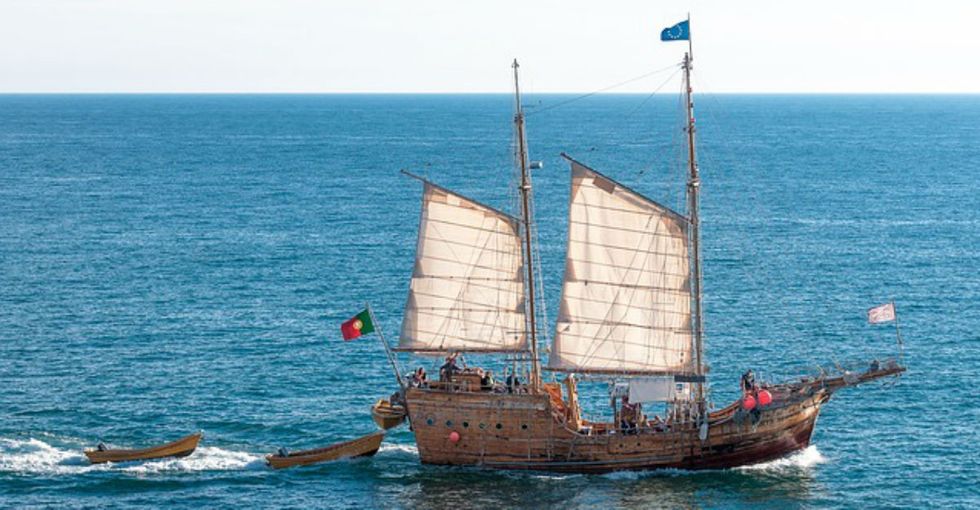 Aside from the occasional joke about a pirate, how many of us actually think about outlaws in the oceans?

Normal, nonprofessional seafarers — like most of us — probably don't. That's the duty of ... who? Countries with coastlines? Nations have navies and law enforcement for that, right?

Wellllll ... The New York Times looked into this in its series "Outlaw Ocean" and found out some tough truths about crimes that happen at sea.

Basically the open sea is the new Wild West.

GIF from "Once Upon a Time in the West."

While many countries, companies, and even the United Nations have written rules and laws, those laws are often weak. And get this — they're easy for criminals to break.

And if it is my flag? Maybe not even my problem then. Image via ACME Squares/Wikimedia Commons.

And most law enforcement agencies — even countries and their navies — just don't have the inclination or the ability to enforce the laws and rules anyway.

GIF via "Pirates of the Caribbean: Dead Man's Chest."

GIF via "Pirates of the Caribbean: Dead Man's Chest."

All hugely dramatic stuff, just being swept under the proverbial ocean rug.

So, when legit law enforcement turns a blind eye to legit problems, who ya gonna call?

Manta rays? No! We're gonna call someone else.

Yeah. Ideally we'd have legit help from official authorities. But much like Ghostbusters (only these problems are NORMAL, not paranormal), sometimes you gotta think outside the law enforcement box to get the solution started.

Here are the major players.

Have you heard of the Environmental Justice Foundation?

These folks won Seaweb's Seafood Champion Award in 2015 for their work monitoring illegal fishing in West Africa. Illegal fishing messed up the environment, and it's associated with some pain for humans, too.

How about the movie "Blackfish"?

"Blackfish" didn't necessarily help with fighting crime on the high seas as much as it had a huge effect on keeping criminal things from continuing to happen to creatures that'd rather be swimming freely in the high seas.

This film was so effective in communicating the trouble with SeaWorld that it had an impact on SeaWorld's profits.

A documentary movie as crimefighter — what an unlikely hero.

I bet you've heard whispers of Greenpeace, too.

They're more than just those people you hear about yelling at whale murderers! (Though they do do that!)

They're out to save not just whales and fish but human beings being placed at risk for human trafficking by illegal fishing.

"The same unbridled economic interests that are driving destruction in our oceans are also allowing horrific labour practices and human rights abuses of workers in the seafood industry."

And it's right! To do their part to stop this madness, Greenpeace is working with the largest producer of canned tuna, Thai Union Group, and its largest brand, Chicken of the Sea, to get it together and stop massive labor violations on its supply chain.

What's perhaps my favorite part of sea crime fighting from Greenpeace involves no one getting on a boat ... but it involves investors in boats.

A fishing company in China that would've bought more vessels to fish big-eye tuna (which is already overfished) wanted to go public on the Hong Kong Stock Exchange. Shares, stockholders, all that.

Greenpeace followed the tail of this Chinese fishing company, and it found some pretty FISHY (sorry, not sorry) finances.

According to Greenpeace's John Hocevar, the fishing company "acknowledged that overfishing was an issue, but said that there was so little enforcement it shouldn't be a problem! Greenpeace exposed their plans, and ultimately the public offering was cancelled."

Yep. After Greenpeace reported the problems to the Hong Kong Stock Exchange, the company, China Tuna, withdrew its plan to go public and ultimately lost around $150 million.

Greenpeace is a big name, and they have funding, and they're putting it to use to help people. Cool.

And let's talk about a small but mighty aerial and satellite imaging company, SkyTruth.

Great name, right? Wait until you hear their motto.

Satellite images are cool. But they can also be very very useful. Image by NASA Goddard Space Flight Center/Flickr.

As The New York Times Outlaw Ocean series reported, SkyTruth pointed out a stripe of dirty water (you could see it from space!) that "stretched about 92 miles from Cabinda, Angola."

With the possibilities of satellite technology, it could be much easier to keep an eye on the far reaches of the seas, cutting down on human trafficking, murder, and profiteering. Will governments continue to turn their back on enforcing laws? Or will they embrace technology and crack down on some egregious law-breaking?

I don't think it's a reach to say that we'd maybe rather have actual certified law enforcement enforce these laws. But until then, at least there are some sea cowboys — behind film cameras, on boats, and in satellites — out there lookin' out.

GIF via "A Fistful of Dollars."