The important reason why this New York Fashion Week collection made history. 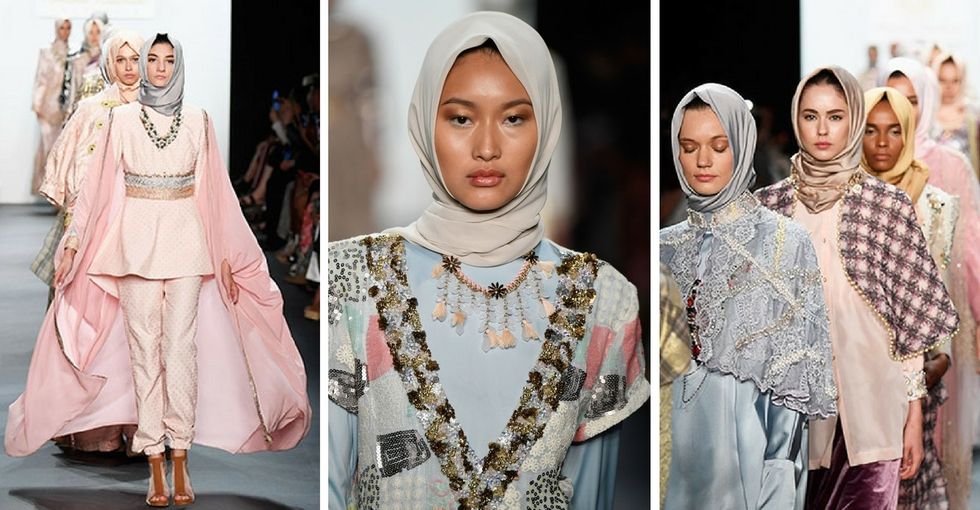 This is Anniesa Hasibuan, an Indonesia-based fashion designer who just made history for a very cool reason.

On Sept. 12, 2016, Hasibuan's collection rocked the runway at New York Fashion Week, and every single model was wearing a hijab.

The hijab, which is worn by many Muslim women, is a reflection of their faith.

As you can see, the designs were stunning.

Judging by the audience's reaction, I'm not the only one who's loving Hasibuan's aesthetic either.

As Elle reported, the show ended with Hasibuan receiving a standing ovation — a rarity at a New York Fashion Week event.

"I want to bring the Indonesian name to the fashion world and use my clothes to introduce people to the different and diverse parts of Indonesia," Hasibuan explained to The Jakarta Post.

Her brand, by the way, is just one year old.

Fashion may be a frivolous topic to some, but its impact on our culture goes far beyond the clothes on our backs.

Inclusivity in fashion has become more of a priority in recent years, as brands see the value in promoting body-positivity and diversity to a mass audience hungry for change. It's what customers want, so it's not just the right thing to do, it's good for business too.

It's why the fashion industry has started tracking the data on — and is generally getting better at — the diversification of models in terms of race, body size, age, and LGBTQ representation. This year, for instance, designer Christian Siriano sent several plus-size models down his runway, while brand Chromat was praised for its inclusive show, which featured people of all colors, transgender models, and Lauren Wasser, who lost a leg to toxic shock syndrome four years ago.

To be sure, a lot more improvement is needed before the fashion world truly reflects all types of people. But we're on the right track.

“Women come in all sizes," McCarthy said. "Seventy percent of women in the United States are a size 14 or above, and that’s technically ‘plus-size,’ so you’re taking your biggest category of people and telling them, ‘you’re not really worthy.’”

And we've seen models like Danielle Sheypuk, who's taken the runway rulebook and tossed it out the window.

"I have taken it on as my job to change the negative way that society views people with disabilities, both in the areas of dating and fashion," Sheypuk told The Guardian.

Photo by Bryan Bedder/Getty Images for Runway of Dreams.

She makes a great point. Because fashion can change how society sees certain groups of people.

That's why seeing hijab-wearing women rock a runway in New York City to thunderous applause is so incredible.

It's about so much more than the clothes.