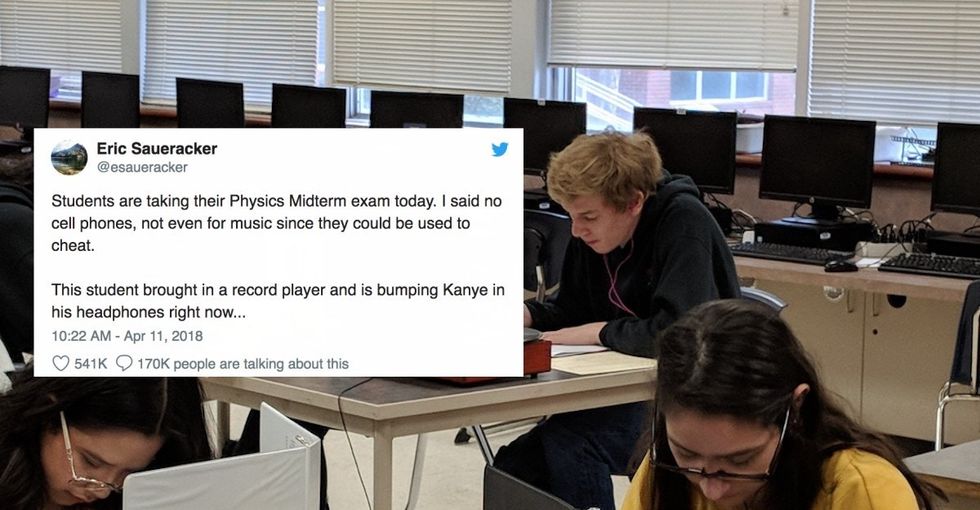 Yet something even better just happened in real life when Eric Saueracker, an instructor in Washington, told his students they couldn't bring cellphones to their physics test, not even to listen to music.

One teen took advantage of a loophole: He brought in a record player. And Saueracker pulled out his own smartphone so he could document the unusual circumstances for his Twitter followers.

Students are taking their Physics Midterm exam today. I said no cell phones, not even for music since they could be… https://t.co/OVvCnMOYNQ
— Eric Saueracker (@Eric Saueracker) 1523467367.0

Yo, that takes a special kind of chutzpah. Most of us, I'm assuming, would have simply taken the test music-free. But the kid who listened to vinyl not only managed to follow the letter of the law, he aced the test — and his musical accompaniment was Kanye's ironically titled "College Dropout."

As a follow up: @TheItalianPacca did ace the test whilst listening to college dropout...
— Eric Saueracker (@Eric Saueracker) 1523499327.0

Yet teens these days aren't simply acting out timeless rituals of smartassery. They're also surprisingly healthy, well-behaved, and civic-minded.

The New York Times reports that teen smoking rates have never been lower, studies have found thatalcohol use among teens is down by 50% since the '90s, and despite every sitcom warning us otherwise, on average, teens are safer drivers than ever (or at least they have been since 1975).

Plus, many of them are at the vanguard of the gun control movement, taking on politicians and the NRA, not allowing anyone to disrupt their momentum under the guise of free speech (sorry, Laura Ingraham), and one is even getting a full ride into every Ivy League school he applied to.

Still, questioning authority is an important rite of passage on the way to becoming a healthy adult with critical thinking skills. So, sure, it's perfectly admirable that Parkland survivor and activist David Hogg, who just turned 18, has a rather evolved birthday wish: That everyone get out there and vote.

But it's also wonderful that his classmate Cameron Kasky wanted to poke a little fun at his solemn attitude, suggesting that he'll also go ahead and give his friend an actual present (a gift certificate).

I think we can safely assume that today's teens are doing just fine.