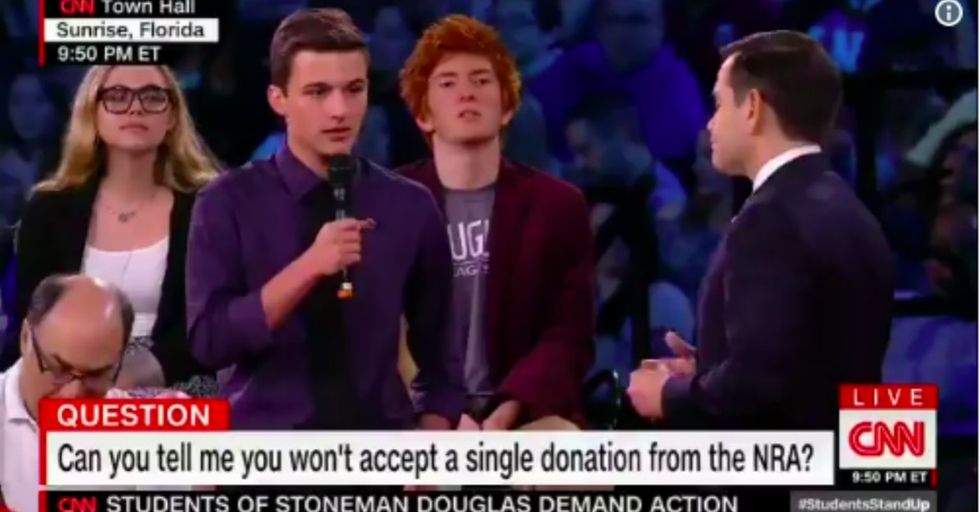 A week after the Stoneman Douglas shooting, thousands of people showed up for a town hall on gun violence in Florida.

The Feb. 21 town hall, which was aired live by CNN, featured survivors and family members of those killed in the deadly high school shooting. A spokeswoman for the NRA also showed up.

It was an emotional event, during which Sen. Marco Rubio (R-Florida) took the bulk of criticism over his financial contributions from the National Rifle Association and his dismissive comments about passing gun control measures.

Rubio was the lone Republican on stage fielding challenges from parents and students of Stoneman Douglas.

The first person to challenge him was Fred Guttenberg, whose daughter Jamie was killed in the shooting. "I want to like you," Guttenberg told Rubio. "[But] your comments this week and those of our president have been pathetically weak."

One by one, students took the stage and confronted Rubio, who often seemed at a loss for words when pressed on whether or not he would support new gun safety measures.

Simply put, it was not a great night for Rubio, who was once considered a rising star of Republican politics.

Both on the stage and online, people were eager to point out his failure to hold gun advocates accountable.

While Rubio expressed an openness to some gun safety changes, he refused to say he'd stop taking money from the NRA.

Rubio said he would support a bill in the Senate raising the minimum age for buying a rifle to 21, up from the current age of 18. (Federal law already prohibits anyone under 21 from buying a handgun.)

He also said he would support banning "bump stocks," which allow semi-automatic weapons to be easily converted to fully automatic weapons. And he generally backed expanding background checks on individuals purchasing weapons.

However, after Stoneman Douglas junior Cameron Kasky asked Rubio plainly, "Can you tell me right now that you will not accept a single donation from the NRA?" the crowd loudly booed Rubio as he avoided giving a direct answer.

.@cameron_kasky to @marcorubio: "Can you tell me right now that you will not accept a single donation from the NR… https://t.co/jDHAe0xTAp
— Michael Skolnik (@Michael Skolnik)1519269409.0

Rubio has accepted more than $3 million in campaign contributions from the group, the sixth most of any currently sitting senator. But Rubio tried arguing that his support from the NRA wasn't about money, responding to Kasky by saying, "People buy into my agenda. ... The influence of these groups comes not from money; the influence comes from the millions of people that agree with the agenda."

The CNN town hall was clearly an unpleasant experience for Rubio. But more politicians need to hold them.

Some of the students praised Rubio just for showing up, as did his Democratic colleague Sen. Bill Nelson (D-Florida), who noted that both Gov. Rick Scott and President Donald Trump had declined invitations to appear at the event. But a willingness to actually speak to the people one represents shouldn't be praised as outstanding — it should be the norm.

The fact that congresspeople may be met with anger and frustration at public-forum events doesn't mean they should be avoided. It means that they should show up, listen to that anger, and then do something about it. Elected officials serve at the behest of the public, not just those who give them campaign cash. If more lawmakers follow Rubio's lead and show a willingness to engage with "the other side," the chances for meaningful change can only improve.