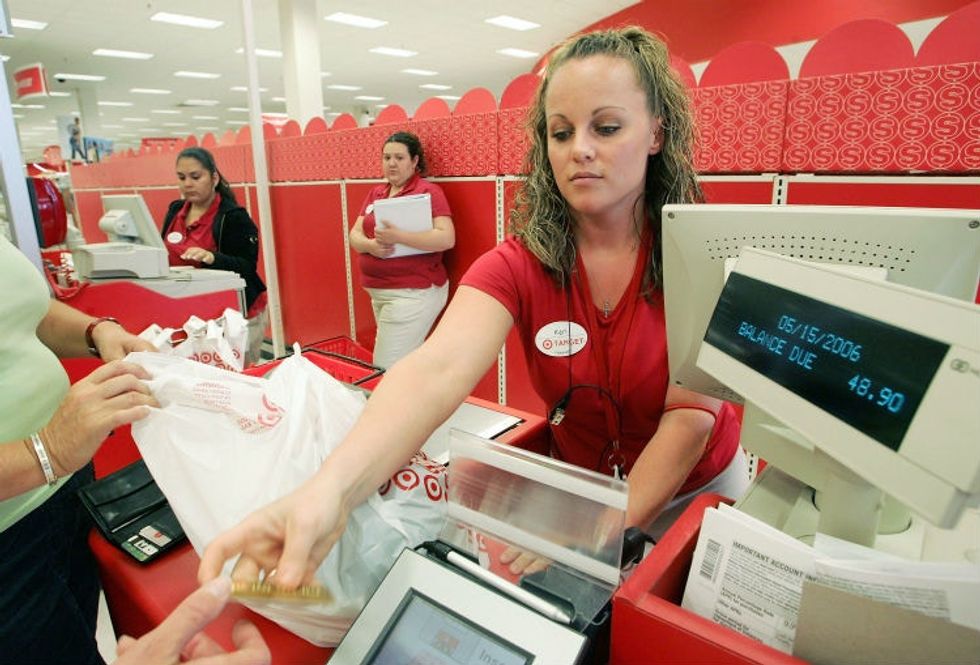 Payday is about to get a bit sweeter for many Target employees.

On Sept. 25, the retail giant announced plans to hike its minimum wage for all workers to $11 an hour beginning next month. The company also promised to increase that figure to $15 an hour by 2020.

"We’re proud to say that our team members are known for going the extra mile," Target explained on its website. "That kind of effort is something to recognize."

Notably, the wage hike beginning in October will also extend to the approximate 100,000 temporary workers the company plans on hiring for the holiday season.

The retailer has begun including plus-size mannequins on its sales floor, defended transgender rights in regards to its bathroom policy for customers, touted Photoshop-free swimwear ads this past summer, and fought to challenge gender norms in the way it presents certain products to kids — all moves that've came with varying degrees of backlash and praise from the public.

In 2012, hundreds of fast food workers in New York City walked off the job, demanding an increase in pay and union rights — a pivotal moment that put the Fight for $15 on the national radar.

Since then, cities like Seattle, Los Angeles, and Chicago have significantly raised their minimum wages, and many corporations — feeling the heat from consumers and advocates — have begun following suit. Even McDonald's and Walmart — two companies infamous for poor worker pay and protections — have made moves to raise their minimum wages.

But, as the Fight for $15 organization pointed out, those corporations need to do more.

"[Target is] proving that paying folks fair wages is good business, even in a tight retail market," the group said in a statement, in which they ask readers to "not be shy" in demanding Walmart and McDonald's "follow Target's lead."

As many outlets have reported, Target's wage hike reflects an ongoing heated competition among many major retailers to lead the way on worker pay.

Washington also seems to be taking note of the growing demand to prioritize workers. As polling shows widespread, bipartisan support among Americans to increase the federal minimum wage, congressional Democrats, for the first time in April, united behind legislation that would gradually raise pay to $15 an hour from coast to coast.

Target's wage hike shows yet another battle won in the fight for $15 — a fight that seems to be the favorite in winning the whole war.