Star Wars characters pose with shelter pets for a unique spin on a classic photo shoot.

The Force is strong with these furry rescue animals. 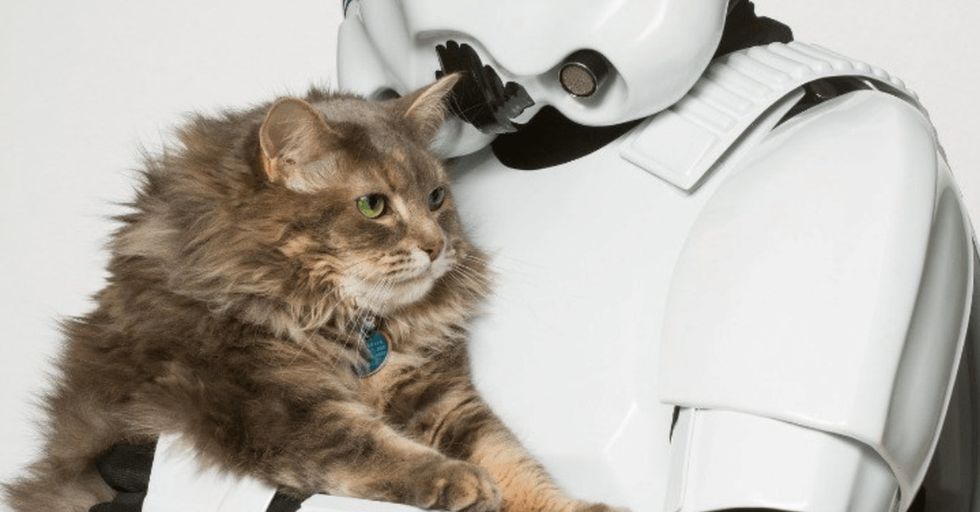 That's right — in a recent photo shoot, the Ottawa Humane Society used the Force to show off some of their adorable adoptable pets.

A Stormtrooper holds a cat, and the cat is clearly unsure about all this. Image via Rohit Saxena.

Good question. The Ottawa Humane society, a charity that helps more than 10,000 animals each year, recently teamed up with photographer Rohit Saxena and the all-volunteer 501st Capital City Garrison to make this series of rescue pets with Star Wars characters.

The point of the series was to showcase the pets in fun, positive ways.

The group also wanted to reach a different audience than a typical photo series would.

"This was all in the name of doing something a little different from our standard adoption pictures."

"This was all in the name of doing something a little different from our standard adoption pictures," Saxena explained. "Given the global, overwhelming response, I think we've made progress."

A Tusken Raider — one of the Sand People — cuddles a cute little kitty. Image via Rohit Saxena.

Hmm, is there a "dark side of The Force" to rescue pets? Aren't they unhealthy and misbehaved?

Saxena even shared his own rescue dog story with me: "We adopted a rescue dog named Sprocket 4 years ago, and it's no exaggeration to say he's everyone's best friend in our home and neighborhood. ... Everyone seeking a pet should visit and support their local shelters, and at least consider shelter adoption — you'll be a hero in the eyes of your pet."

As for how the shoot itself went, Saxena said, "We've gotten pretty good at comforting reluctant animals long enough for a quick picture, or even knowing when to let them take a pass. That said, the animals were a brave bunch that week ... so we had a surprisingly smooth photo shoot."

"We've gotten pretty good at comforting reluctant animals long enough for a quick picture, or even knowing when to let them take a pass."

Another Stormtrooper takes a break from being "a bad guy" to walk their cute pooch. Image via Rohit Saxena.

About 7.6 million companion animals enter shelters in the U.S. every year.

Yeah, 7.6 million. But the situation is far from hopeless. You can make a huge difference by volunteering with your local shelter, adding your own rescue pet to your family, or even just making sure your pet is spayed or neutered.

In the meantime, I'll leave you with one final image — of a guinea pig battle.

All three characters join together for a battle of guinea pigs. What, did you miss that scene in the movies? Image via Rohit Saxena.