Shonda Rhimes said 'yes' for a whole year. These are 5 things she learned. 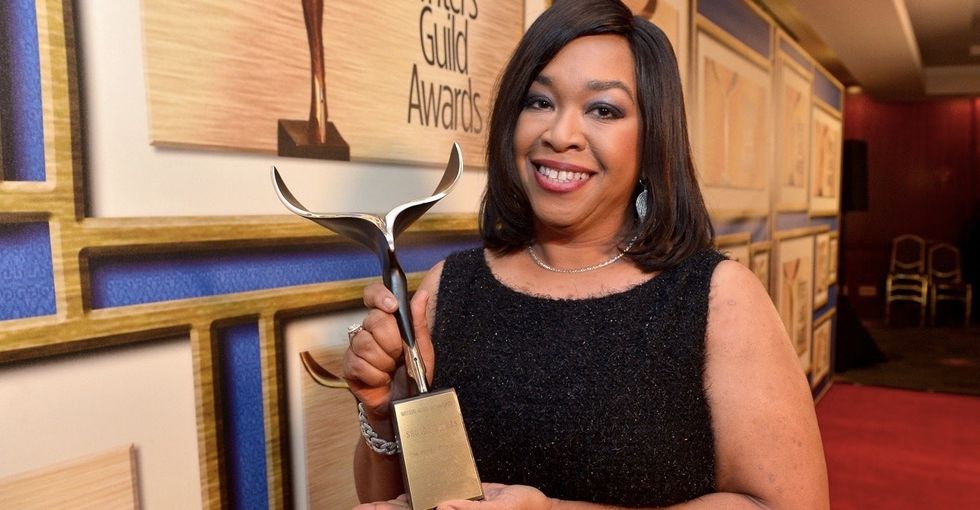 "You never say yes to anything."

These six words, uttered by Shonda Rhimes' older sister in 2013, open up the famous showrunner's new bestselling book, "Year of Yes." And they set Rhimes on a journey to say "yes" to everything that she could for one whole year.

In the process, she had some freeing and hilarious unforgettable experiences, lost over 100 pounds, and overcame her biggest fears. In short, she emerged a bold, happier person. And now she's sharing how.

The book, which takes us on her "year of yes" journey, is chock-full of touching stories, personal revelations, and, of course, Shonda's characteristically authentic, no-holds barred witty prose with phrases like "Chicken bone, Janet Jackson boob fear-snot, y'all." (The book is worth a read simply for the story that goes along with that phrase.)

But most importantly, she shares some empowering lessons that should make any ambitious, driven woman stand up and say, "Yes!!!"

Here are five of my favorites:

We're all told to have dreams. And not just any dreams — big dreams. HUGE dreams. We're told that dreaming those big dreams will somehow set us on a path to fulfill them. But Shonda calls foul on that thinking.

Dreamers, she says, spend their time looking up at the sky and making plans and talking and, well, dreaming. The doers are the ones who actually get about to the business of working, creating, and trying things and therefore getting things done and ending up more successful than they could have imagined.

Her own success as a game-changing TV writer and showrunner, for example, she says, "never would have happened if I hadn't stopped dreaming of becoming [Toni Morrison] and gotten busy becoming myself."

Shonda shared this lesson during the first big "yes" of her year: overcoming her fear of public speaking and agreeing to give the commencement speech at Dartmouth College. You can listen to it in full here:

This is a simple lesson but one that is easy to forget in the fast-paced and stressful day-to-day life that many of us live: It's OK to play.

She says it's OK to stop and take 15 minutes to roll on the floor with her daughter or take a bubble bath and drink a glass of wine or just generally have some fun.

In order to make this happen, you may have to say no to some other things like answering email after work, being on time to an event, or meeting an unrealistic deadline. But the joy you get from indulging in a bit of pleasure every now and then will far outweigh the perceived losses.

Says Rhimes: "This 'Yes' is about giving yourself the permission to shift the focus of what is a priority from what's good for you over to what makes you feel good."

3. "It never ever helps to think that Whitney Houston's hairdo is real."

When Shonda was a teenager, she says wanted nothing more than to have her hair look like Whitney Houston's. She spent many frustrating mornings with curling irons and cans of hair spray only to find that her hair still did not look like Whitney's.

Then, one day, as an adult, she discovered that the fabulous Ms. Houston hair that she failed to achieve all those years was a wig. Mind blown.

Shonda uses this story to explain why she is so open about having a nanny.

As a mother who the world thinks "does it all," Rhimes says it is important to show the world that she doesn't do it all. She has help. The snacks she brings to her kid's school are store-bought, not homemade. She is constantly making tradeoffs to make things work. No matter how perfect her life may look, it isn't. Her life, her nanny, her store-bought snacks, they're all just like Whitney's wig.

When we stop feeling inadequate and stop comparing ourselves to ideals that may not even be real, we'll all be a lot happier.

This is Shonda's three-step process for accepting a compliment.

In her "Year of Yes," she practiced over and over to no longer do that self-deprecating, praise-rejection thing that so many women do. Instead, she learned to fully accept and receive praise. To help herself, she asked whether or not Wonder Woman, Serena Williams, or Beyoncé really doubt their greatness or feel bad about being told how "badass" they are. Probably not.

So while you may not be Wonder Woman or Beyoncé, if you are striving for greatness and doing the best that you absolutely can, you have to be OK with being better than everyone else sometimes.

Let that sink in for a second.

Not better as in an arrogant, "I matter more than you," existential sense but better at doing whatever it is that you do. Own your greatness. Own your expertise. And when someone compliments the thing you worked hard to achieve or be, just say thank you, smile, and shut up. Eventually, it'll start to feel good.

As a writer, Shonda knows a thing or two about how to tell a good story. But with so many narratives about who and what a woman "should be" in regard to age, career, relationship status, and so many other expectations, it's hard sometimes to remember that you have the right to be the ultimate narrator of your own story.

In "Year of Yes," Rhimes gets personal and talks about the experience that finally empowered her to admit that she doesn't want to get married. She never has and, as far as she knows now, never will. And that's OK. It is just one of many truths that she began to realize she had to embrace and own in order to write her own life story.

She had to finally say "yes" to who she is.

Saying yes to who we really are and not allowing narratives constructed by others to dictate how we feel and what we do is essential to living a life of freedom and fulfillment.

This is just a taste of the advice Rhimes gives in "Year of Yes."

Now, of course, we don't all have the funds and resources to say yes to every opportunity that comes along, but the overall message of the book goes beyond financial limits.

Rhimes encourages us to acknowledge what is right for each of us and what empowers us to push past our fears, embrace our greatness, and do the things that will add meaning and value to our lives.

Who wouldn't want to say yes to that? Not just for 365 days, but for forever? I'm pretty sure that's exactly what Shonda has in mind.