She's started 3 organizations. And each one made a huge difference in people's lives. 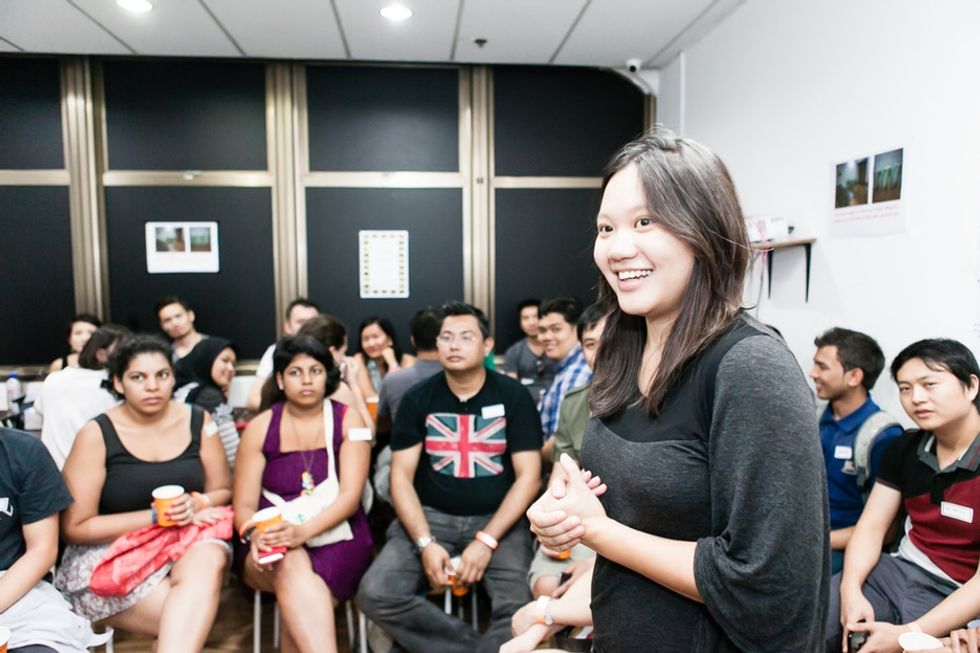 In four years' time, 30-year-old powerhouse Adrianna Tan founded three different organizations — all of which empower people and improve lives across the world.

It seems like there's nothing the young entrepreneur hasn't done; she's traveled to 30 countries (and given a TEDx Talk on curing wanderlust); advocated for gender equality, LGBT rights, and using capitalism to empower people; and figured out a way to incorporate her penchant for travel, education, food, and collaboration into successful businesses that have made life better for hundreds of people.

Adrianna's always on the lookout for ways she can improve her surrounding communities via technology and social outreach.

"Being from a part of the world [Asia] with so many wonderful experiences but also so many dire ones definitely shaped the way I thought about life and business.I saw no point in building a company in Asia to solve only 'first world problems,'" Tan told Upworthy.

The first organization she started is the Gyanada Foundation, which aims to fully fund education for underprivileged girls from five cities in India.

The literacy rate in India, especially for women, historically has been low. By the time Adrianna, who was born in Singapore, had spent a decade living in and traveling to India, she had seen firsthand that the bar for education for women needed to be raised. She had already been volunteering for educational nonprofits that were working with girls in need, so she simply decided to start her own.

Thanks to her foundation, 150 Indian girls receive educational scholarships each year.The foundation has done so well that it won the Public Service Award from Asia Society’s Asia 21 Young Leaders Initiative, which included a $10,000 grant.

Next up, the foundation plans to expand: It's working on incorporating a sex-education-through-theater class and a coding class for their girls to get a leg up in the tech world.

In 2013, Adrianna moved on to a project that fueled her food-loving heart: Culture Kitchen.

Culture Kitchen provides pop-up, cross-cultural potlucks of sorts, where traditional dishes are served, and local Singaporeans and migrant workers can meet and interact.

The idea for it came out of the inordinate amount of xenophobia Adrianna was witnessing both in person and online.

"I decided I wanted to create moments for people across different ethnicities and cultures, and class, to meet and eat with each other," she explained.

Not surprisingly, the idea caught on, and in June of last year, Culture Kitchen was awarded $10,000 in cash and $10,000 in flights by Jetstar's Flying Start Program.

Then came Wobe, a program that aims to give Southeast Asian women the opportunity to provide for their families using only their phones.

Image via Wobe/Facebook, used with permission.

The idea for Wobe came out of an all too common problem: "How do we create income and employment to millions of women who need to provide for their families, but can't?"

To the tech-savvy Adrianna, the answer was simple: create an app. The app helps these women start their own micro-businesses, such as selling prepaid phone credit and other digital commodities that are in high demand in Southeast Asia. Right now, they are in pre-launch phase, but their projected impact looks promising — Adrianna says that if the program catches on, they expect Wobe will be able to increase the income of Indonesian women by 30% to 200%.

At the end of the day, it all comes back to collaboration.

Working with others across countries and cultural boundaries is behind everything Adrianna does. Her ability to collaborate with pretty much anyone anywhere is why she’s had so many successes in business — including being named a Top Female Entrepreneur of 2015 by True Global Ventures.

"I've had to learn several languages, more 'slang words' and inter-cultural ways of working with people from all backgrounds. Being able to communicate effectively helps a lot, but more than that it is the ability to 'read' situations and context. That is wonderful for business in more than one way," she said.

Social media makes creating these connections easier — Adrianna says that she's found most of her cofounders and collaborators through Facebook and other networks, and it's also how she stays in touch with the communities she's created.

"I've used social media for many years now, and I've found that it is especially effective for business in the emerging markets, where I work. ... It lets us talk directly to real people in real time, and for that Wobe is able to gain invaluable insights."

Adrianna knows you can’t always look ahead and calculate all the risks, especially when setting out as an entrepreneur — sometimes you just have to jump.

As she puts it, "Look into enhancing your risk appetite and more importantly calibrating it, and then take as much of it as you can," she said. "Nothing will move until risk is an element, and that was my most important lesson."