Sean Spicer's most recent comments on the Holocaust are alarming for 2 reasons. 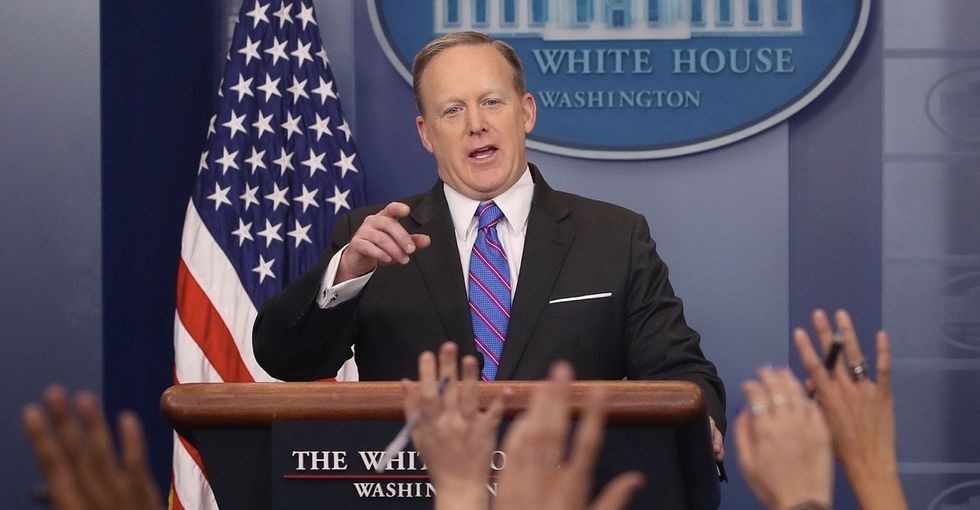 Just how bad is Assad? Spicer went straight to the internet's most overused (albeit somewhat apt, in this case) comparison: "You had someone as despicable as Hitler, who didn’t even sink to using chemical weapons" like Assad did.

People quickly reacted with variations of "WTF are you doing, Spicey?" — not just over the fact that Spicer not only invoked one of history's greatest villains, but because he actually downplayed just how horrible Hitler was.

Spicer only made things worse when he attempted to clarify his comments: "[Hitler] was not using the gas on his own people in the same way that Assad is doing."

There are two big, horrifying implications of what Spicer said that need to be addressed:

While Spicer spoke, MSNBC fact-checked him on the screen. "White House: Hitler didn't 'sink to level of using chemical weapons' like Syrian leader (Hitler gassed millions)." And honestly, anytime you get owned that hard by a cable news graphic-maker, you're probably having a pretty bad day.

At the peak of the Holocaust, as many as 6,000 Jews at the Auschwitz-Birkenau camp were killed by cyanide-based pesticide Zyklon B every day. To say Hitler didn't "sink to the level of using chemical weapons" is reckless and ahistorical.

2. In arguing that Hitler didn't use chemical weapons on his "own people," Spicer implies that Hitler's "own people" were limited to his supporters, rather than all the citizens of Germany, the country he was in charge of.

At the beginning of World War II, more than 200,000 Jews lived in Germany. Many of them died as the result of Hitler's genocidal brutality. German Jews were Hitler's "own people," and it is really important that we acknowledge that. Hitler wasn't fighting some foreign threat. He was targeting his own citizens — people just trying to live in peace within their home borders — because of their religion, sexual orientation, or able-bodied-ness. Let's not downplay that.

Spicer's comparison isn't just inaccurate, it actively erases the true horrors of the Holocaust to justify Trump's military action against Assad, even as Trump refuses to open our borders to Assad's victims — refugees in need of aid.

It'd be one thing if this were the first time this White House made a mistake like this. But erasing basic facts about the Holocaust keeps happening, making it harder to give the Trump administration the benefit of the doubt.

In February, the Anne Frank Center for Mutual Respect pilloried the White House for its weak response to threats made against Jewish community centers. At the inauguration, Trump aide Sebastian Gorka reportedly wore a medal from a Hungarian group with Nazi ties. In its statement commemorating Holocaust Remembrance Day, the White House removed a reference to Jews. And while Spicer eventually clarified his statement a number of times, the damage seemed done.

.@HallieJackson From the print pool, what appears to be a 4th Hitler clarification from Spicer, which adds a senten… https://t.co/E8dYrpO8k6
— Bradd Jaffy (@Bradd Jaffy)1491937929.0

"On Passover no less, Sean Spicer has engaged in Holocaust denial, the most offensive form of fake news imaginable, by denying Hitler gassed millions of Jews to death," Steven Goldstein of the Anne Frank Center wrote on Facebook.

It's important that we get history right and that we don't misrepresent the past. It's the only way to avoid repeating those mistakes. Take note, Sean.