Scientists have captured the first image of a black hole, and the size and scope of it alone will blow your mind. 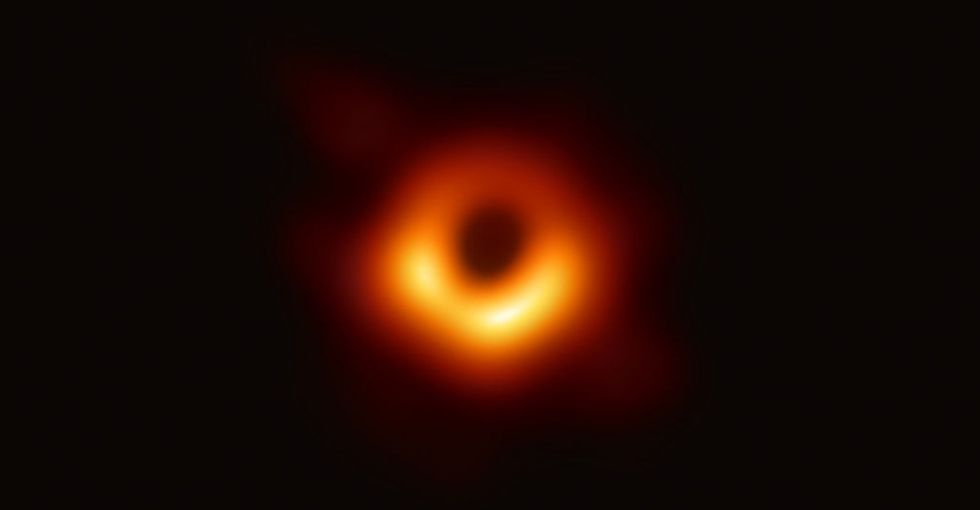 Scientists have captured the first image of a black hole, and the size and scope of it alone will blow your mind.

It's a hugely historic day for us puny little humans. For the first time ever, astronomers have definitive, visual proof that black holes are actually a real thing in the universe.

A team of 200 scientists captured the image over the course of 10 days, using eight linked telescopes positioned around the globe. Professor Sheperd Doeleman of the Harvard-Smithsonian Centre for Astrophysics, one of the scientists who led the telescope project, has called it "an extraordinary scientific feat."

"We have achieved something presumed to be impossible just a generation ago," Doeleman told the BBC. Yay, humans.

The numbers are mind-boggling. This black hole is located in a galaxy 500 quadrillion km away from Earth. The black hole itself is 40 million miles across—larger than our entire solar system—and has a mass 6.5 billion times the mass of our sun.

"It is one of the heaviest black holes that we think exists," Professor Heino Falcke, of Radboud University in the Netherlands told the BBC. "It is an absolute monster, the heavyweight champion of black holes in the Universe."

Seeing something so incredibly massive highlights how unbelievably minuscule we humans are in the universe.

Let's try to get a hold of some of these numbers. First of all, 500 quadrillion km (that's 500,000,000,000,000,000, if you want to actually see the crapload of zeroes) is an incomprehensible distance. Even if we could travel at the speed of light—which we can't even come close to—it would take us 50 million years to get there. The fact that we've invented telescopes that can actually see anything that far away is freaking amazing, but it's also a reminder that we are mere flecks upon a speck floating about here in space.

Our planet feels so big to us here on the ground. As an individual, I am one out of approximately 7,000,000,000 humans on Earth. On my feet, I take up about one square foot of the surface area of the Earth, the total of which is 196.9 million square miles. That alone is enough to make me feel pretty small.

But when I think about how a million Earths could fit inside our sun, and the mass of this black hole I'm looking at is 6.5 billion times that?

We could let these numbers spiral us into an existential crisis, or we can use them to gain some much needed perspective.

Trying to ponder the physical expanse of the known universe is enough to make anyone's head explode. And when we add our own individual, physical puniness on top of it? Well, that's a quick and easy way to plunge ourselves into despair over our own insignificance, isn't it?

But one cool thing about being human is that we can choose how we view things. And laying our eyes on a black hole that's 50 million light years away and larger than our solar system offers us an opportunity for some physical and philosophical perspective.

How do our lives appear from that far away? Is that spat with our neighbor or coworker or in-law really that big a deal in the large scheme of things? What does the grudge we're holding onto look like from space? How many things do we blow into huge proportions in our lives that just aren't that important when we get some distance from them? What if we let all of that go?

I know I'm getting all deep-and-feely here, but that's what happens when you start pondering the immensity of space and time and our place in it. An image like this can remind us how tiny our "one wild and precious life" really is. Each of us has one unique shot at our earthly existence, so it only makes sense to focus on what really matters.

Yes, we are small and insignificant compared to the vastness of space. But we are here, and we might as well make the most of our fleeting time, in our teeny tiny spot in the universe, while we have the chance.

From Your Site Articles
Related Articles Around the Web
health
Health

You're not broken: People share experiences with intrusive thoughts to help normalize them

'I was today years old when I realized there was a word for this.'

When I was younger I used to think I was dying or that I would get kidnapped by a random stranger, but I kept it to myself because I thought something was wrong with me. I thought that telling people would confirm this fear, so I kept it inside my entire life until I was an adult and learned it was part of ADHD and other disorders, such as OCD and PTSD. But it doesn't have to be part of a disorder at all—a vast amount of people just have intrusive thoughts, and a Twitter user, Laura Gastón, is trying to normalize them for others.