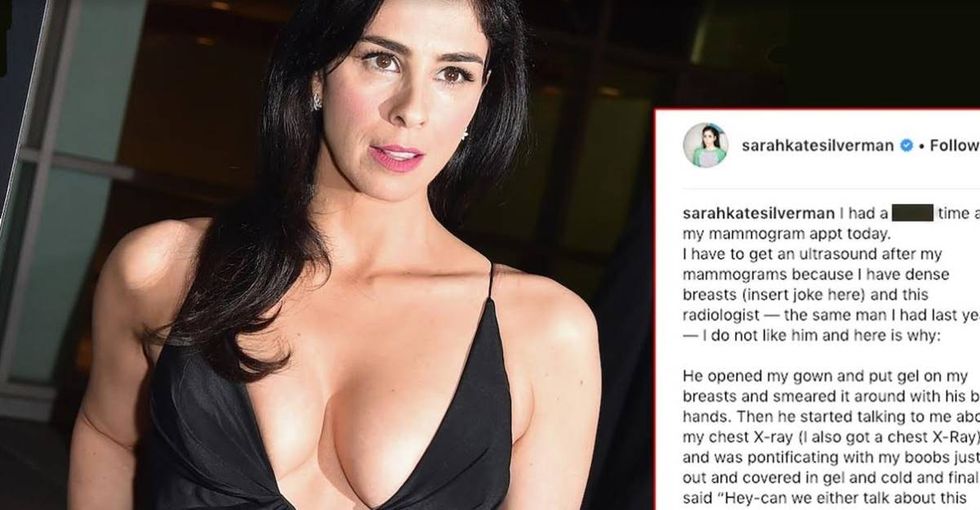 Getting an annual mammogram is one of the most important things a woman can do for her health. Finding breast cancer early reduces the risk of dying from the disease by 25-30% or more.

Women should begin having mammograms yearly at age 40, or earlier if they're at high risk.

Actress-comedian Sarah Silverman's recent experience getting her annual mammogram was a wake up call for her that has a lot of women nodding in agreement.

However, the light-bulb moment wasn't about her health, but a realization about the importance of confronting men in positions of power.

I had a shitty time at my mammogram appt today.

… and this radiologist — the same man I had last year — I do not like him and here is why:

He opened my gown and put gel on my breasts and smeared it around with his bare hands. Then he started talking to me about my chest X-ray (I also got a chest X-Ray) and was pontificating with my boobs just out and covered in gel and cold and finally I said “Hey-can we either talk about this when I'm dressed or WHILE your doing the ultrasound? I'm not comfortable with my breasts out just shooting the shit with you"

Even a doctor with zero experience would know that women can feel vulnerable when topless, even through they're speaking with a healthcare professional.

Was he excited to be talking to a topless celebrity? Did he think she was comfortable? Was he a predator that was taking advantage of the fact he had plausible deniability? Was he a creep or just clueless?

Okay so — he smears the gel on with his hands and NO GLOVES on and when he glides the ultrasound wand thing over my breasts he drags his fingers on them and it fucking bothers me. Again, AS I TOLD HIM LAST YEAR, I said “Hey! Do you need to be touching me with your fingers?" He said “No". And he pulled them off of me. Then he added “I do that for balance." I said “Well I believe in you and I think you can do with without your fingers on me"

If he didn't need to use his fingers he shouldn't have done it in the first place.

Look, I truly don't think he was getting off on it, BUT it is his job to be aware that this is vulnerable for a woman. Wear fucking GLOVES - this isn't a date. For him to be so arrogant that he didn't even internalize the problem when I said something to him about it last year is obnoxious and probably a subconscious power thing if we're getting deep.

That was my last mammogram with this dude. Or any dude.

Look. I'm a grown woman and I'm fine. But this guy does this with everyone and I know that personally it took many years into adulthood before I spoke up for myself. It's uncomfortable and too easy to think it's all in your head. And arrogant fucks like this doctor take advantage of women's socialized instinct to not speak up.

All this to say speak up. Trust that thing in your gut that tells you this shit ain't right.

Silverman's reaction to the creepy doctor is an empowering lesson for women who have a hard time speaking up.

Speaking up to an authority figure, such as a doctor, can be more difficult for women because they are socialized to prioritize being “nice" over everything else. This gives doctors who straddle the line of inappropriateness enough leeway to get away with inappropriate touching.