Rhino Foods makes the cookie dough in your ice cream. They also treat their employees like family.

They call their boss "Big Cheese" ... but that's not the even the best part. 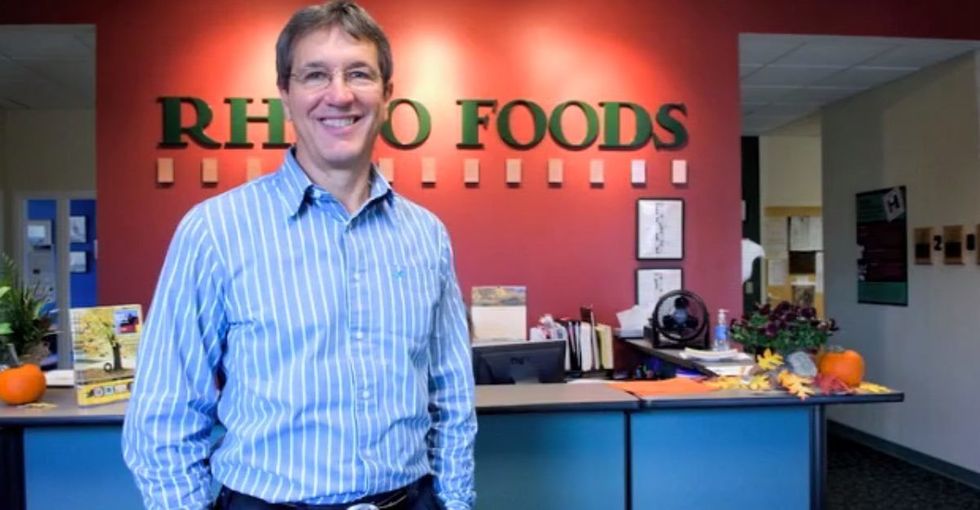 Watch this feel-good video about a company owner who is doing it so right.

You know what makes people reaaalllllyyyy happy at work? Respect.

A recent survey found that the most significant contributor to a person's job satisfaction is "respectful treatment of all employees at all levels."

"In a 2010 study, James K. Harter and colleagues found that lower job satisfaction foreshadowed poorer bottom-line performance. Gallup estimates the cost of America's disengagement crisis at a staggering $300 billion in lost productivity annually. When people don't care about their jobs or their employers, they don't show up consistently, they produce less, or their work quality suffers." — Teresa Amabile and Steven Kramer, The New York Times opinion piece, 2011

Now let's talk about a business owner who understands how those things relate.

If you didn't have an opportunity to watch the video up there from Rhino Foods, here's the gist:

Rhino Foods manufactures the raw cookie dough in many of the treats we enjoy, such as ice cream. So I think we can all agree that this is a very important company! ;) The founder of Rhino Foods, who goes by "Big Cheese" but also has a real name, Ted Castle, cares about his employees. And that makes all the difference to them.

The company's regard for its workforce comes right back to benefit Rhino Foods. You can read more about Ted's way of running the company on the company's website.

Here are a few things Rhino Foods employees had to say about Ted and their jobs.

"Ted is a coach, first and foremost, and he tries to get the best out of people."

"I think the business understands their employee's needs in and outside the company... they give a damn about what their employees are going through."

"It starts at the top — it starts with the Big Cheese. He sets a tone and it just flows."

"If you can make people feel better about their personal lives and what's going on and empower them in that, they're going to bring it back here to Rhino."

"They care about their people and I feel like, this company, the people in it, they're my family."


And this story ... well, I think it sums up why the employees feel the way they do.

"I had an old beater car. My car had died. I was out in the warehouse talking to somebody about it. ... Ted happened to be walking by and he goes, 'What's going on?' And I told him about my car dying, and he actually threw me the keys to his car and said, 'Here, take mine for a week. I'll drive the company wagon.' I'll never forget that, you know?"

High five to Rhino Foods and all companies that treat their employees this way.

Not to be cheesy, but this sort of work environment makes sense and cents.

Not only is it the right thing to do, but the company's bottom line benefits tremendously. Businesses should embrace this kind of caring attitude — focusing on employee wellness, showing concern about employee's personal lives, helping them find fulfillment in their work, and more. It's a win-win situation!