Reese Witherspoon revealed she was sexually assaulted at 16, in a powerful speech. 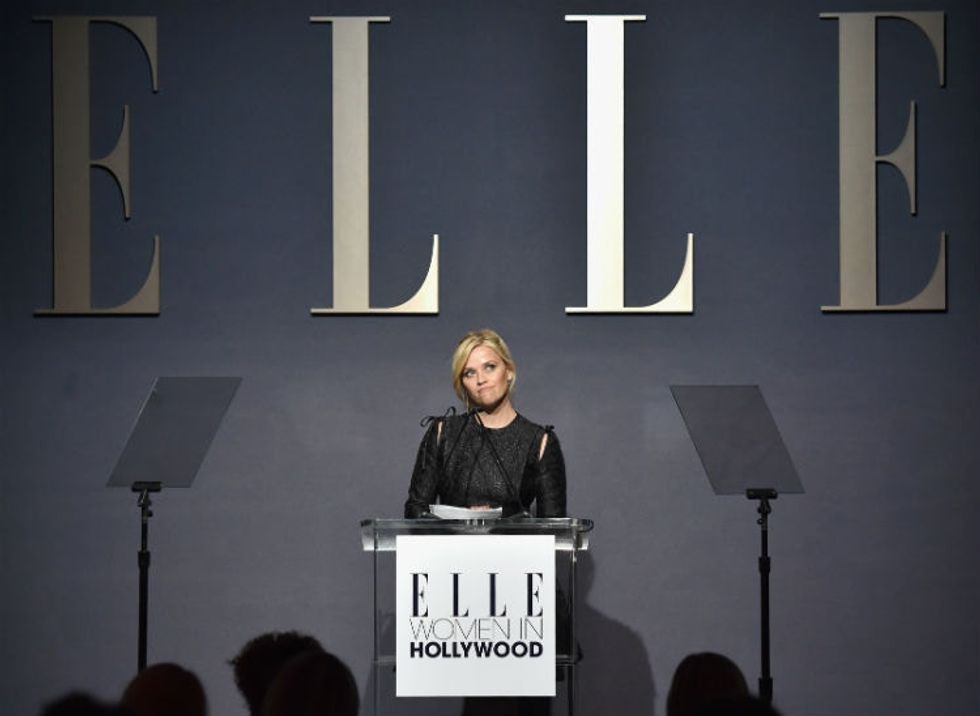 Reese Witherspoon's three decades in Hollywood have been peppered with prestigious awards, a long list of blockbuster successes — and, she shared recently, several incidents of sexual assault at the hands of powerful men.

The A-lister was on stage at ELLE's Women in Hollywood event on Oct. 16, introducing her "Big Little Lies" co-star Laura Dern, when she revealed she's been sexually harassed numerous times throughout her career. One instance, she said, occurred when she was just 16 years old.

Inspired by the dozens of women who've come forward in recent days alleging disgraced movie mogul Harvey Weinstein harassed, assaulted, or raped them, Witherspoon joined the chorus of those demanding more needs to be done.


"I didn’t sleep at all last night," Witherspoon began, reflecting on a difficult week of news for many survivors of sexual assault.

"I have my own experiences that have come back to me very vividly, and I found it really hard to sleep, hard to think, hard to communicate," Witherspoon told the crowd. "A lot of the feelings I’ve been having about anxiety, about being honest, the guilt for not speaking up earlier or taking action. True disgust at the director who assaulted me when I was 16 years old and anger that I felt at the agents and the producers who made me feel that silence was a condition of my employment."

Reese Witherspoon and her daughter Ava Phillipe at the ELLE Women in Hollywood event. Photo by Neilson Barnard/Getty Images for ELLE.

"I wish I could tell you that that was an isolated incident in my career, but sadly, it wasn’t. I’ve had multiple experiences of harassment and sexual assault, and I don’t speak about them very often, but after hearing all the stories these past few days and hearing these brave women speak up tonight, the things that we’re kind of told to sweep under the rug and not talk about, it’s made me want to speak up and speak up loudly because I felt less alone this week than I’ve ever felt in my entire career."

Witherspoon instructed the room of Hollywood influencers on how to advance the cause in their own lines of work.

Namely, she said, they need to do whatever they can to help put more women in positions of power.

"There’s a lot of people here who negotiate quite frequently with different companies and heads of companies, and I think maybe during your next negotiation, this is a really prudent time to ask important questions like, who are your top female executives? Do those women have green-light power? How many women are on the board of your company? How many women are in a key position of decision-making at your company? Asking questions like that, I found, it seems so obvious, but people don’t ask those questions."

Witherspoon isn't just talking the talk either. She's been changing the game for women in Hollywood for years.

In 2012, Witherspoon launched Pacific Standard, a production company focused on creating more women-led entertainment projects. It's produced blockbusters like "Wild" and "Gone Girl," as well as the critically acclaimed miniseries "Big Little Lies," in which Witherspoon starred alongside Dern, Nicole Kidman, and Shailene Woodley. The series was widely praised for drawing attention to issues surrounding domestic abuse and sexual violence.

After the 2016 presidential election, Witherspoon also decided to launch Hello Sunshine — an online platform aimed at allowing women from across the country to share their own stories and be heard.

But so much more is needed.

We desperately need more people like Witherspoon working behind the scenes in Hollywood.

A study released in January found women made up just 7% of director roles across the industry's top 250 films in 2016 — down 2% from the year before. If filmmaking wants to be a more inclusive and less abusive industry for women, men need to become allies in action, advocating for more women to take up space behind closed doors, where deals are made and movies are green-lit.

But Witherspoon — who's "really, really encouraged that there will be a new normal" after the Weinstein allegations went public — believes change is on the horizon.

"For the young women sitting in this room, life is going to be different for you because we have you, we have your back," Witherspoon said. "And that makes me feel better because, gosh, it’s about time."