Reba McEntire is your new Colonel Sanders, and maybe 2018 won't be so bad. 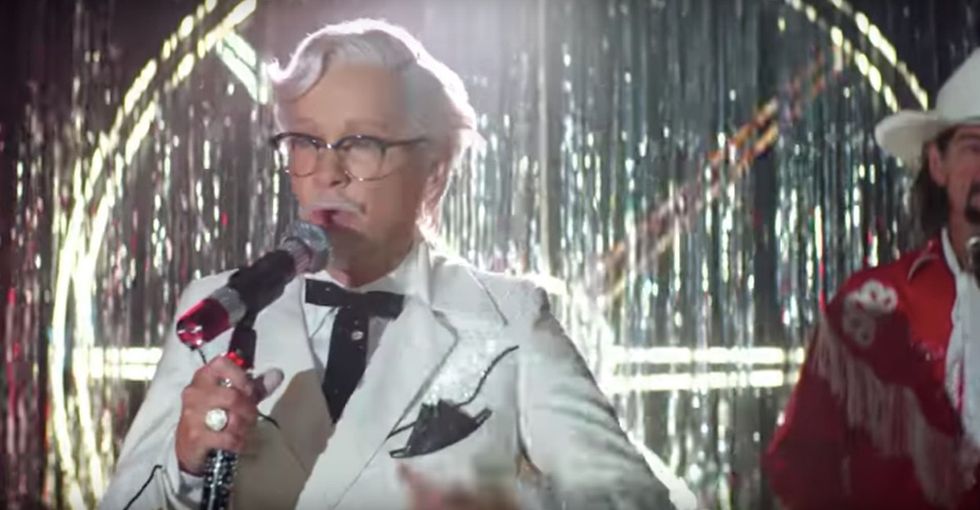 Only for this role, she looks a little more like this.

"I’m Colonel Sanders, the same as always,” she sings. "I swear I'm not a famous woman!”

Several male actors have portrayed the Colonel, including Rob Lowe, Norm MacDonald, Ray Liotta, and Jim Gaffigan. But this is the first time the company's founder has been portrayed by a woman or a musician. McEntire was chosen specifically for the role because of her Southern roots (she's from Oklahoma) and legend status in country music. She'll appear in television spots for the chain's Smoky Mountain BBQ chicken through April.

So the internet had absolutely nothing to say about all of this and that's the end of this charming and delightful story, right?

Hold on to your biscuits, folks.

Loyal Colonel Sanders supporters, confused followers, and former fans of KFC voiced their displeasure at the decision on social media.

Who knew people were invested in which actors are selected to portray this Southern icon? But apparently, they are.

Some were turned off by the idea of a woman playing a man.

Others were skeptical, but open to change.

But for the most part, people had some fun with it. After all, we're talking about fast food chicken, here.

For instance: What might a woman playing Colonel Sanders have to put up with?

And then there's this tweet, which is funny (and a little bit sad) because it's true.

Others, particularly fans of McEntire, were pretty pleased with the decision. Who wouldn't want to see one of their faves break the dredged and breaded ceiling?

When you see that #ColonelSanders is trending and realize its because @reba is so AWESOME in the new commercial!! H… https://t.co/ZBMB7qzcvF
— Shawn Parr (@Shawn Parr)1516976746.0

While this a very small, silly thing to choose to complain or cheer about, it's not completely insignificant.

In 2018, women are still breaking barriers, both large and important and small and crispy. This week alone, Rachel Morrison became the first woman to be nominated for an Academy Award in cinematography. Sen. Tammi Duckworth announced her pregnancy and will be the first senator to give birth in office. And on Sunday at the Grammy's, we may see Cardi B become first woman ever to earn the award for Best Rap Song and Best Rap Performance.

A female Colonel Sanders probably wasn't the first thing people participating in the Women's March had in mind. Women have made some serious moves, but when it comes to improving representation, earning equal wages, confronting gender based violence, or sexual misconduct, we have a long way to go.

Then again, every first, even a seemingly silly one, is a chicken-fried step in the right direction.