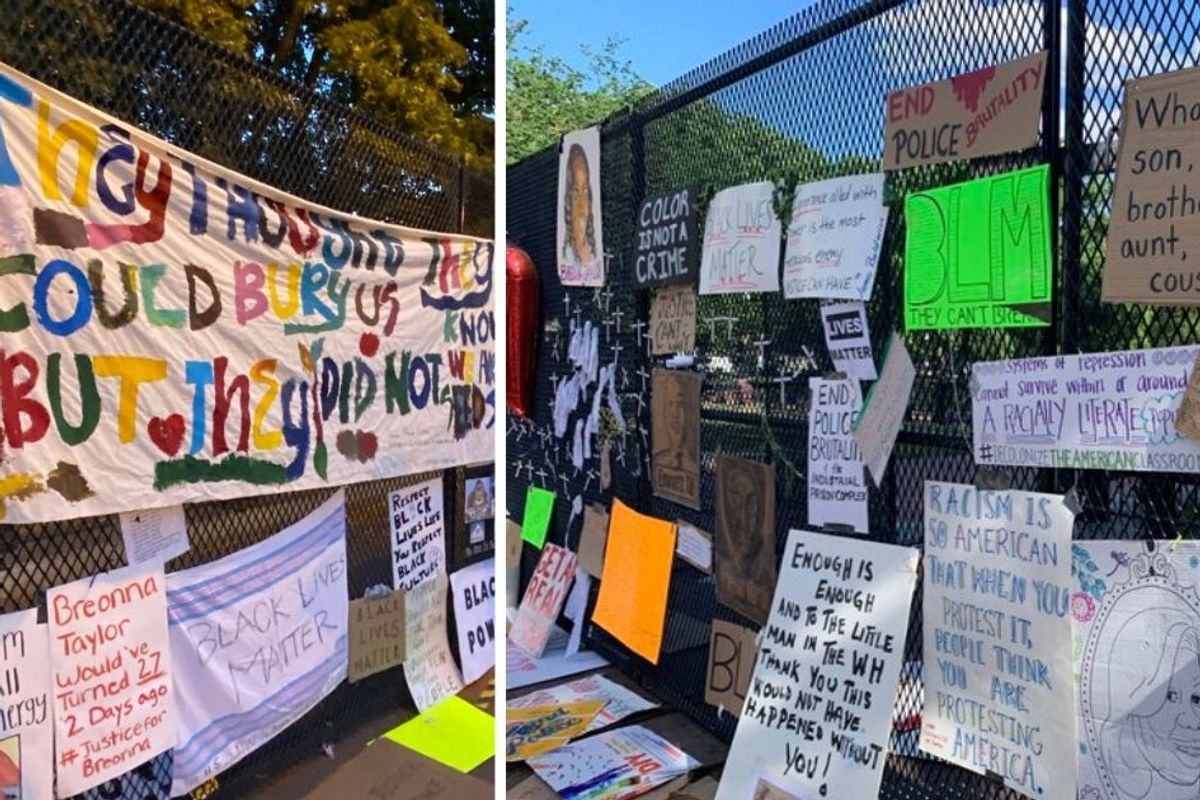 For nearly two weeks, Americans have shown up by the thousands to protest racial injustice and police brutality, including in our nation's capital. As a result, an 8-foot fence has been erected around the White House, reinforced by concrete barricades, spanning approximately 1.7 miles, according to the Washington Post.

Now protesters are using the fence as a living monument racial justice, plastering it with signs supporting the protests, naming people who have been killed at the hands of the police, and calling for support for Black lives.

The fence outside the White House has been converted to a crowd-sourced memorial wall — almost like an art gallery… https://t.co/fmOpJa0Rjv
— Hannah Natanson (@Hannah Natanson)1591549877.0

.@realDonaldTrump seems to be walled in by a #BlackLivesMatter Memorial. Peaceful protestors helped pay for the wal… https://t.co/zzBNe8C2aK
— Alexandra Chalupa (@Alexandra Chalupa)1591584895.0

The signs are a mix of standards such as "Black Lives Matter" and "No Justice No Peace," in addition to more creative statements like "Racism is an insult to God's creativity," and "Racism is so American that when you protest it, people think you are protesting America."

How ironic for the president, who has celebrated police brutality in his speeches, utilized police brutality to clear his path for a widely-ridiculed photo op in front of St. John's Church, and voiced vehement disapproval of peaceful protests on the issue, to now be surrounded by a wall of messages like this.

Reddit users posted some interesting commentary on the fence-turned-memorial wall:

"Who would have thought that when Trump finally built his stupid wall it would be to keep America out of the White House?"

"Between this and the mayor painting 'Black Lives Matter' down the street outside the White House, I'm loving these peaceful power moves. Way to go DC!"

"BLM should offer a service where you can pay to get your message posted. From across the country, I'd pay $10 to have my message zip-tied to that fence."

"I hope this fence is preserved. It belongs in a museum for future generations."

"Outstanding. The visuals of taking memorials down will be worse for Trump than leaving them up - which isn't good for him and probably pissing him off into ranting rage."

The fencing itself had already prompted a viral #BabyGate hashtag, as people used the fence to poke fun at President Trump's toddler-like tantrums and need for attention. Now it's created an opportunity for protesters to have their voices heard in a powerful new way.

The president has also been blasted for hiding out in a bunker during protests outside the White House, especially after he had urged the governor of Michigan to talk to the armed protesters who stormed the state capitol protesting stay-at-home orders. (In addition to the hypocrisy, one has to ask: If you have to hide in a bunker and build a wall to protect yourself from your own citizens, can you really call yourself a successful leader?)

How Trump handles this wall—both now and when the times comes for it to be removed—will be telling. In the meantime, what a beautiful symbol of citizens demanding their voices be heard.