People banded together to find the world's loneliest frog true love — and it might have just worked. 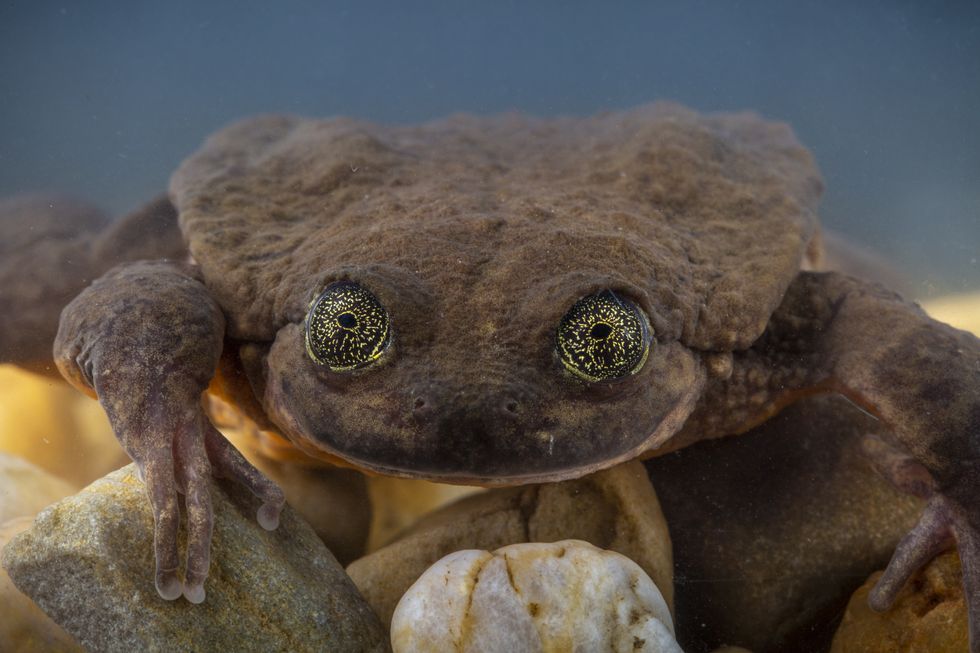 Perhaps the story of Romeo and Juliet doesn’t have to end in tragedy after all.

At least not for the frogs who go by the same names as those famous star-crossed lovers.

Romeo is a Sehuencas water frog (Telmatobius yuracare), an aquatic species unique to the cloud forests of Bolivia, that for the last decade, was known as the “world’s loneliest frog.”

He had been living all alone in an enclosure at the Museo de Historia Natural Alcide d’Orbigny in Bolivia. A team of scientist had brought him into captivity in 2008 with the hopes of creating a conservation breeding program for his species because they were witnessing amphibian population crashes in the region due to a deadly pathogen called chytrid, habitat loss, pollution and climate change.

“The decline in this species was sudden and somewhat unexpected,” explains Christopher Jordan, the Central America and Tropical Andes Coordinator for Global Wildlife Conservation (GWC). “By the time biologists realized there was a problem, the species was already very difficult to find.”

In the 10 years since  Romeo’s capture in the wild, no biologist was able to find a single other Seheuncas water frog in the wild. They began to fear that Romeo was the last living member of his species.

For years, Romeo called out for a mate from his enclosure. Then in 2017, he stopped. Fearing he’d lost hope, his museum caretakers knew they had to try and do something.

So in February 2018, just before Valentines Day, GWS, Match and the Bolivian Amphibian Initiative launched an international campaign (along with a Match profile and a Romeo twitter account) to raise $15,000 for scientific expeditions into the Bolivian cloud forests to make a desperate search for a girlfriend.

People all over the world fell in love with Romeo and rallied to help save his species. Romeo became a local star in his hometown of Cochabamba — and around the world too.

Before long, the campaign raised $25,000 from people in more than 32 countries — enough to fund several field expeditions.

And as soon as the Bolivian rainy season began (when the frogs are more likely to be spotted swimming in streams), a team of researchers embarked on their first search expeditions. They spent whole days scouring rivers and streams, then camped overnight in the cold, rainy forests.

And then finally, they found frogs.

To be precise, they found five: three males and two females.

“I could not believe it,” says Teresa Camacho, the leader of these expeditions who is also head of the herpetology department at the Natural History museum where Romeo calls home. “Seeing one of these frogs in the wild after 10 years was wonderful — even more so after having seen Romeo alone for so long.”

Back at the museum, the team built special habitats for their new residents and began monitoring them carefully before introducing them to Romeo.

They have to make sure that these frogs haven’t been exposed to the deadly disease that has wiped out much of the species and that they are healthy.  “We want to make sure that nothing we do harms the frogs at the Museum and will thus [we] take every precautionary measure necessary before introducing Romeo and Juliet.”

But so far, says Teresa, “Romeo’s friends are doing well and eating well” and they plan to keep all of Romeo and Juliet’s supporters updated on when the romantic meeting will happen and how it goes.

The team still has four remaining expeditions ahead in search of more frogs — but their success so far is great news for the species.

The plan is to try to learn as much as possible about the distribution of the species, their ecology and whether frogs are developing a resistance to disease. They also plan to launch a conservation breeding program if they can get Romeo and Juliet to mate, which will hopefully result in a reintroduction program for the species.

Of course, there is still a lot of research and work that needs to be done before they get to that stage, but finding the frogs has given new hope to the scientists.

“In the context of the current mass extinction that we humans are causing worldwide,” says Christopher Jordan, “Romeo and Juliet constitute a beacon of hope that show us that there is still time to protect the amazing diversity of life that we share with this planet."