People are slamming famous punk rocker for complaining about the homeless. But he's got a good reason. 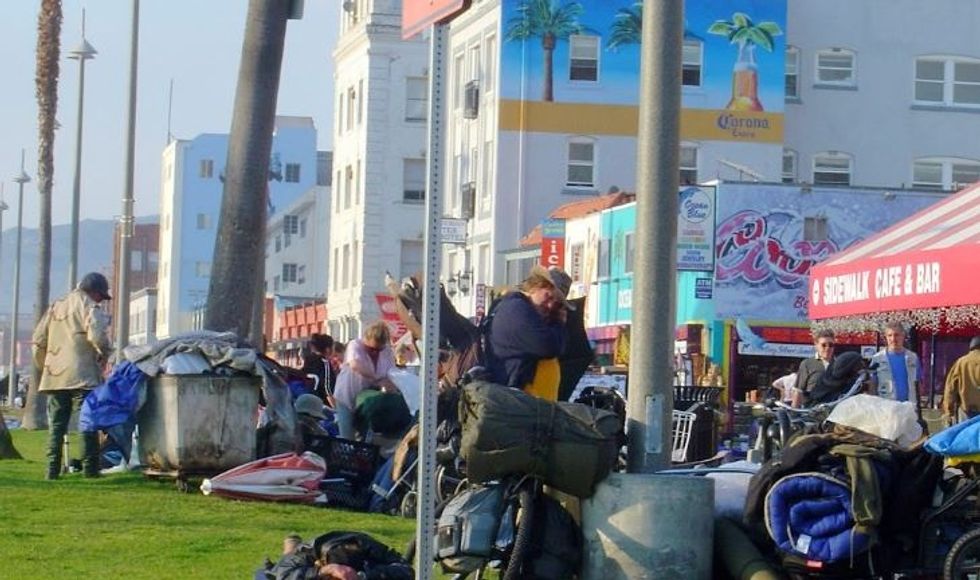 Los Angeles is experiencing a homelessness epidemic with the number of unhoused people rising 75% over the past six years.

About 54,000 of the city's four million residents are currently experiencing homelessness and the root cause is the city's lack of affordable housing. According to LAist, since 2000, renter incomes have decreased by 3% while rents have gone up 32%.

The city recently created a quarter-cent increase in its sales tax to fund programs to help house these residents, but encampments are still popping up throughout the city.

Venice Beach, a swanky West L.A. neighborhood famous for its eccentric residents, has seen one of the largest increases in unhoused people.

Venice Beach resident Johnny Lydon (aka Johnny Rotten), lead vocalist of iconic punk groups Sex Pistols and Public Image Ltd, has become fed up with the unhoused people in his neighborhood and has even called the cops on them.

“They moved in en masse. They're all young, they're all like 24," Rotten told Newsweek. “They're aggressive, and because there's an awful lot of them together they're gang-y."

He recently called the police on some people for setting up an encampment in front of his house. “They came over the gate and put their tent inside, right in front of the front door. It's like... the audacity," he complained.

Rotten's outrage is ironic, given the fact he penned the authority-bashing classic “Anarchy in the U.K."

People on social media are bashing Lydon for what appears to be hypocritical coming from a man who once said, "If you give me the chance, I'll destroy America for you."

While it's easy to point a finger at Rotten for betraying his punk image, he's dealing with serious personal issues. His wife Nora Forster is in the mid-stages of Alzheimer's Disease. Lydon says his wife is “struggling to cope" with the influx of vagrants.

Lydon insists he's not a hypocrite.

“No, I'm a bloke that's worked hard for his money and I expect to be able to use my own front door," he said in his usual blunt matter.

You may not know Gladys West, but her calculations revolutionized navigation.

She couldn't have imagined how much her calculations would affect the world.

Dr. Gladys West is inducted into the Air Force Space and Missile Pioneers Hall of Fame, 2018.

This article originally appeared on 02.08.18

If you've never driven your car into a lake, thank Gladys West.

She is one of the mathematicians responsible for developing the global positioning system, better known as GPS.

Like many of the black women responsible for American achievements in math and science, West isn't exactly a household name. But after she mentioned her contribution in a biography she wrote for a sorority function, her community turned their attention to this local "hidden figure."

Keep ReadingShow less
relationships
Get stories worth sharing delivered to your inbox
By signing up you agree to Upworthy's privacy policy.
Science