People are loving this hilarious viral post about a dad bottle-feeding his baby in public. 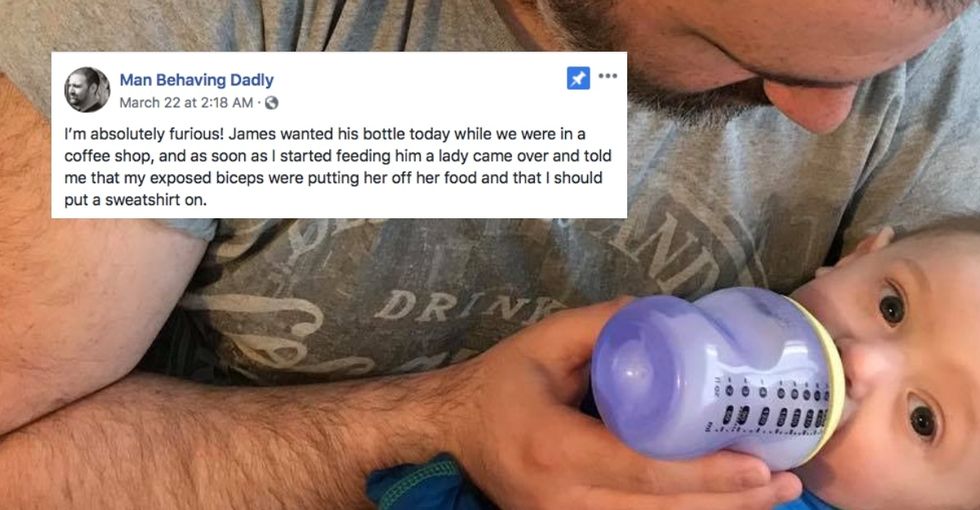 Despite being the primary method of feeding babies for-literally-ever, breastfeeding in public is still a hot topic of debate.

A commenter expressed her frustration at having to watch women breastfeed in public. Luckily, we have a built-in ability that makes it so that we never EVER have to be subjected to such things.

People feel very strongly about babies being breastfed in public and they aren't afraid to say so. Perhaps that's why this dad's Facebook post about bottle feeding his baby in public has so resonated with people that it's been shared 25,000+ times.

The story this dad tells about being harassed for his "exposed biceps" is hilariously familiar to breastfeeders.

Blogger Simon Harris shared a photo of him feeding his baby a bottle on his "Man Behaving Dadly" Facebook page with an accompanying description of what happened when he dared to do it in public.

I’m absolutely furious! James wanted his bottle today while we were in a coffee shop, and as soon as I started feeding...

“I’m absolutely furious!,” Harris wrote. “James wanted his bottle today while we were in a coffee shop, and as soon as I started feeding him a lady came over and told me that my exposed biceps were putting her off her food and that I should put a sweatshirt on.”

*Snort* Okay, we can see where this is going, right?

“Because I was holding the bottle at a certain angle apparently it was making my right bicep look too pumped and she said she would complain to the manager. It’s not my fault - when you are bottle feeding your arms get engorged because of all the lifting and holding, as well as the scooping and sterilising.

I told her to leave me alone as I was just providing nourishment for my baby. However, just a few minutes after that, another lady came over, winked at me and told me that she ‘wanted a go’ as well before walking back to her husband who told me not to pay any attention to her as she always makes harmless comments like this and nobody complained in the old days.

Before I knew what was going on, a manager came over and asked if I would like to give him the rest of his bottle in the little room where they keep the dishwasher supplies as it would be ‘more comfortable’ for me. How the hell would squatting on a crate of Finish tablets be ‘more comfortable?’”

Yep. The alleged disgust, the inappropriate comments, and the invitation to feed the baby in an uncomfortable place—it’s all par for the course for parents who breastfeed.

What's funny about Harris's post is that it's so recognizable and predictable. Cue the “Taking a crap is natural, but we don’t do that in public!” commenters, the “Breasts are sex organs!” folks, and the “What about the children?!” pearl-clutchers who love comparing the feeding of babies with having sex or defecating in public. It happens every time this subject comes up.

I've spent many hours explaining to people why those responses are basically bunk. For those who feel tempted to make those kind of arguments, please watch this brief video before you start typing:

New video! BREASTFEEDING IN PUBLIC VS. PEEING AND POOPING IN PUBLICI can't even count how many comments I've seen making this comparison. Here's why it's bunk.

For those who say it's just so easy to find someplace private to feed a baby, consider which is easier: For mom with a hungry baby to gather up all of her stuff, including perhaps her other small children whom she may have with her, to go find a place that every human in the vicinity considers a discreet enough place for her to breastfeed? Or for a person who doesn't want to see a baby breastfeeding to simply move their eyeballs half an inch in their sockets so they don't have to watch?

Harris concluded his post: "Anyway I bet 97% of you won’t share this, mainly because it’s a load of bollocks and people are only monumental arseholes about boobs for some reason."

Harris's satire is on point, but the satirical comments on the post further drive it home.

If you've ever read an online debate about breastfeeding in public, you'll recognize the hilarity in these comments on Harris's post:

"Well why didn't you just feed him before you went out because thats how it works right?" wrote one woman. "I think you just did it to show off your guns and seek attention. Your biceps should be for your wife's eyes only. Have some respect for yourself!"

"How would I explain this to my children for goodness sakes?" wrote another commenter. "They’ve never even seen their father's biceps, well only in rare instances while he’s doing manly yard work outside in the heat (although he still is quite discreet). I think it should be MY choice if I should be forced to explain to my children what biceps were made by God to do. Shame on you. This is why you should cover up that arm and that baby. Think of everyone else."

Oh, man. This is all too familiar. As is this:

"Why did you have to put this on Facebook? You're just begging for attention? Back in my day people bottle fed their babies discretely. I'm sick of it being pushed in my face."

And this: "Feeding the baby is perfectly natural but so is pooping and you don’t see people doing that in public do you 😠 why don’t you have some self respect and cover up with a towel people shouldn’t have to be exposed to your biceps when they are TrYiNg tO EaT."

Bottom line: Babies gotta eat. And whether they're being fed from a breast or a bottle, you don't have to watch. Our eyeballs move for a reason. It really is as simple as that.

Emily Calandrelli was stopped by TSA agents when she tried to bring her ice packs for pumped milk through airport security.

Traveling without your baby for the first time can be tough. And if you're breastfeeding, it can be even tougher, as you have to pump milk every few hours to keep your body producing enough, to avoid an enormous amount of discomfort and to prevent risk of infection.

But for Emily Calandrelli, taking a recent work trip away from her 10-week-old son was far more challenging than it needed to be.

Calandrelli is a mom of two, an aerospace engineer and the host of the Netflix kids' science show "Emily's Wonder Lab." She was recently taking her first work trip since welcoming her second child, which included a five-hour flight from Los Angeles to Washington, D.C. Calandrelli is breastfeeding her son and had planned to pump just before boarding the plane. She brought ice packs to keep the milk from spoiling during the flight, but when she tried to go through airport security, the TSA agents refused to let her take some of her supplies.