My mixed daughter was told it's 'weird' that I have dark skin. This is what I told her.

An African-American dad had a conversation about race with his mixed daughter in terms that a preschooler could understand. 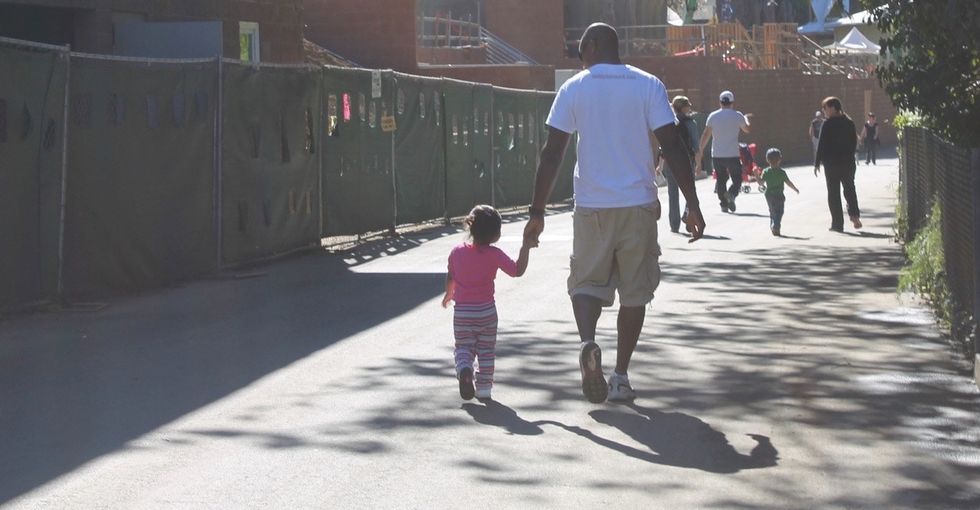 Asking how a preschooler's day went can bring about some interesting conversations. This one took the cake.

My daughter is like most 5-year-olds, especially when her stream of consciousness starts flowing.

"The sun and moon are friends, right?"

"It's not fair that I can't eat bacon every day."

"Can we live at Disneyland?"

Sure, kiddo ... whatever you say. GIF from "Community."

But on a recent drive home from school, she stopped me in my tracks when she told me what one of her classmates said.

"Daddy, Marcy [not her real name] said your dark skin is weird. Are you weird?"

For some background, my wife is half-white, half-Japanese. And I'm black. My daughter's preschool is predominately made up of white and Asian children.

To be clear, this isn't an indictment of Marcy, her parents, or the school. As we all know, kids say some pretty wild and unfiltered stuff. And in the interest of full disclosure, my kid says some pretty wild stuff too, so I'm not sure if her encounter with Marcy went down exactly the way she described it. Regardless, it certainly gave me an opportunity to have my first in-depth conversation about this with my young daughter.

I did this once before with her regarding the happy holidays "controversy" and it worked well, so I figured I'd try to explain race in a way that a preschooler could understand.

1. There are a lot of mixed children out there.

My daughter recently turned 5. If I pulled out a bunch of crayons and tried to engage her in a "yellow and blue makes green" conversation to explain the appearances of mixed children, her reaction would be like...

But without going into too much detail on the "how" part, I explained how two people with different skin colors can create babies who are a mixture of both parents' complexion. More importantly, there are a lot of those little ones out there — from everyday children like mine to celebrity kids like Walker, the son of Taye Diggs and Idina Menzel.

Walker, pictured with his dad, Taye Diggs, is one of millions of mixed children in America. Photo by David Buchan/Getty Images Entertainment.

In fact, according to studies, the percentage of mixed-race babies in America increased to 10% in 2013. Back in 1970, that number was only 1%. About 7% of the adult population in America claims to be of mixed race.

That's when I asked her: "Isn't it cool that we live in a world where kids can look just like their parents or a little different?"

She nodded in agreement.

That was relatively easy, so I decided to dig a little deeper.

My daughter owns many of the royal dolls from the Disney universe. To prove another point, I asked her to choose her favorite and least favorite from the bunch.

Disney royalty (from left to right) in the form of Queen Elsa, Princess Ariel, Princess Jasmine, and Princess Belle.

Her least favorite was Queen Elsa from "Frozen."

Word. That's why we live in California. (I guess the cold really does bother her, anyway. #FrozenJokes)

Her favorite was Princess Jasmine from "Aladdin" because she loves her rendition of "A Whole New World" and wants to ride on a magic carpet someday. Makes sense to me.

Don't you dare close your eyes! GIF from "Aladdin."

Here's what I asked her next: "Did their skin color have anything to do with your choices?"

She shook her head slowly as if she wondered why that would be an actual reason to make such decisions. When I asked her why not, she said, "Because that isn't nice."

As a society, we have a long way to go in terms of achieving racial and ethnic tolerance. Heck, because of Islamophobia, some people believe we should bomb Princess Jasmine's fictional kingdom of Agrabah. You know ... just because.

My goal is to teach my daughters to be tolerant of different races, religions, sexual preferences, and anything else that makes people unique. In other words, if they choose to like someone (or not), it should be due to what's inside of that person's heart and nothing else.

3. Being "colorblind" isn't the answer. It's about noticing racial differences and embracing them.

There are well-meaning people who say: "I don't see color. I only see people." However, arguments have been made about how ignoring race can be a problem because it closes off people to the experiences of those who are different from them. I mean, it's pretty hard to empathize with someone if we think everyone experiences the same stuff, right?

Predictably, her answer was no. But why?

"Because kids play outside when the sky is blue and they sleep when it's black." Parents know that isn't always true, but I think she knew what I was getting at.

To that point, I try to teach my daughter to be a good listener (she's 5, so that isn't all that easy). Everyone and everything — including colors — has a different story to tell. By listening to the feelings and experiences of others, we can learn more about ourselves and the world around us.

As corny as it may sound, every color has its own story. We should listen to all of them. Photo from iStock.

To answer my daughter's question — yes, I'm weird. But my skin color has nothing to do with it.

I'm a grown man who is obsessed with superheroes more than a grown man should be, I'm deathly afraid of frogs, and I don't like the taste of potatoes. In my mind, that makes me a little "out there."

We all have things that make us unique. My hope is we can create a world for our children where those things can be celebrated.