Meet the 15-year-old hero who just gave the U.N. some real talk about the future of his generation.

He woke up everyone in the room. 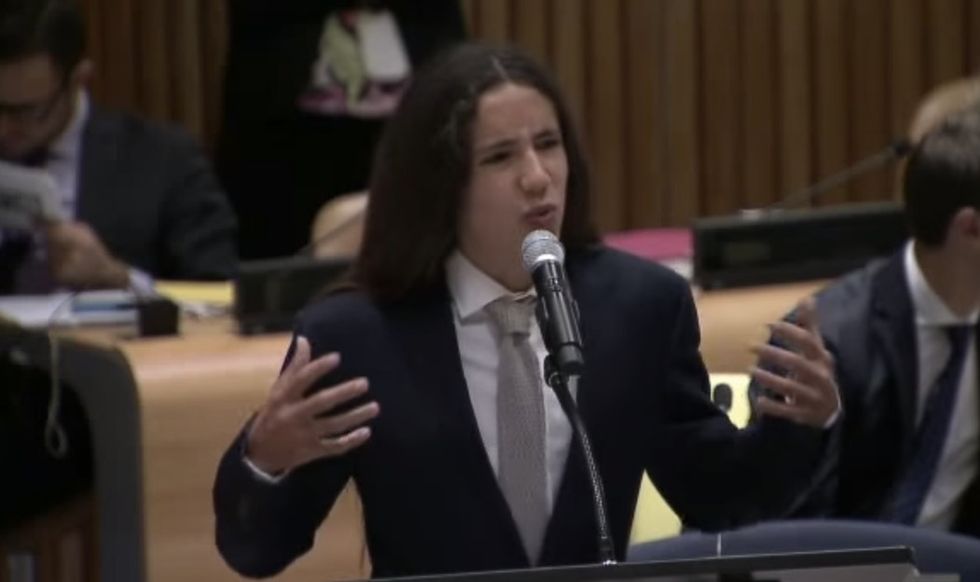 A 15-year-old kid from Colorado just walked into the United Nations and dared a group of world leaders to do something about climate change.

His name is Xiuhtezcatl Roske-Martinez, and he's a true teen badass with a badass Aztec name to match. But, to truly appreciate how epically out of left field his speech was, allow me to set the scene...

The United Nations is a majestic place. At least on the outside.

On the inside, it looks a little like my grandmother's apartment.

She definitely has those chairs. Photo by Eric March/Upworthy.

It is filled with Very Serious and Powerful People who spent the morning addressing each other as Your Excellency...

Figures. Those two always sit together. Photo by Eric March/Upworthy.

"Are you a fish?" — a polar bear. Photo by Eric March/Upworthy.

...and spent much of the morning on June 29, 2015, speaking to one another about how climate change is a Very Serious Problem.

They also talked about how world leaders have really got to get around to really, really solving it this time with the climate agreement they're going to make in Paris this year.

And that's good! It's awesome that the UN is pushing world leaders to talk about climate change. And it's good to have goals. Yay, goals.

When Martinez got up, he immediately threw some fuel on the fire.

"In the last 20 years of negotiations, almost no agreements have been made on a bonding climate recovery plan," he said.

Image by the United Nations.

Frustration with the slow place is common and something folks at the U.N. also feel, as even Ban Ki-moon compared the speed of the negotiations to “a snail's pace."

It's not surprising. This fight against climate change is a huge undertaking by a huge group of people. But, Martinez wanted to remind the assembly that urgency is key because the stakes are too high.

“What's at stake right now is the existence of my generation," he said in his speech.

Kthxbye, hope you like the planet we left you! Photo by Ricardo Stuckert/PR.

Martinez is 15. He and his friends are actually going to have to deal with the consequences of whatever gets decided here.

"We need to reconnect with the earth and end this mindset that we have that we can take whatever we want without ever giving back," he said.

As an accomplished writer, hip-hop artist, climate warrior, and all-around way-too-impressive 15-year-old, Martinez gets invited to speak at a lot of events like this.

This is the third time he's spoken at the U.N. alone. And he knows the drill.

I spoke to Martinez after his speech, and he was characteristically to the point:

"At climate talks, the fossil fuel companies are lobbying in the hallways," he told me. "There are a lot of systems in place that are making it so that we're kind of stuck. ... It's the truth of the message, the voice, the passion I bring against money."

And the politicians who spoke before him at the conference?

"They were all talking about the same thing in a way," he said. "A lot was addressed about needing to take action and wanting to do something, and that's great. But the people are listening are the people in the room, and the world's not listening to them. ... They're not finding ways to relate to this generation."

It may sound like Martinez is a pessimist, but he's not. Not even close.

He just speaks bluntly and from the heart. Because he cares so deeply. And his passion is infectious.

GIF by the United Nations.

"It's reassuring there's a conversation going on," he said. "We have to speed up the conversation. ... Unless we make the right decisions, we're going to wind up with a pretty messed-up planet."

In order to help people make those decisions, Martinez and his organization, Earth Guardians, came up with a list of 50 simple things you can do to start reducing your carbon footprint.

You can try some of them right now! They're really simple.

Every little bit helps the massive global effort Martinez hopes to kick-start with his speech.

And when the nations of the world meet in Paris later this year to draft a new climate agreement, he hopes that this time they'll actually take some serious, no-doubt-about-it action. The U.N. hopes so, too; they gave him a round of applause.