Meal prepping isn't as hard as you think. Take a lesson from this star chef. 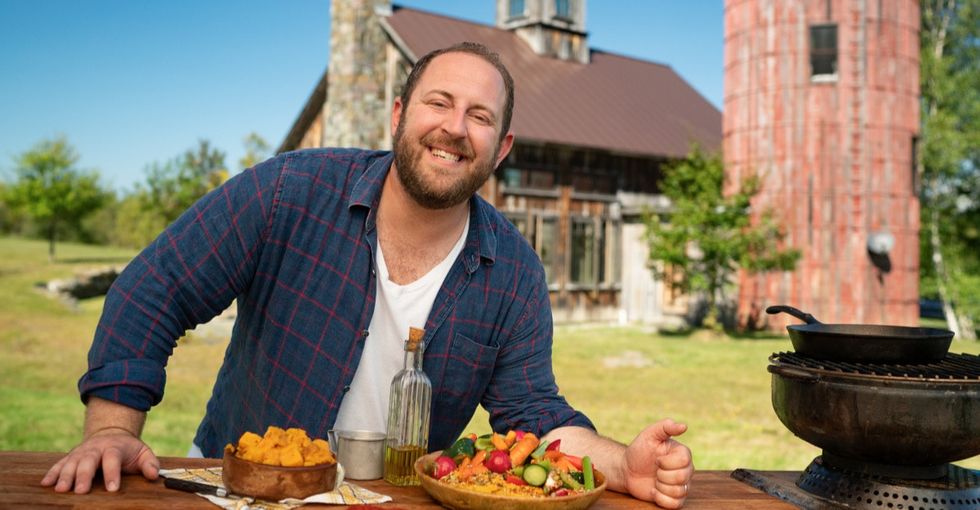 You've probably seen people posting perfectly portioned meals for the week on Instagram and gone, "who the heck has time to do that?"

I don't even have kids yet, but the idea of taking precious hours on a Sunday to shop for food, cook AND portion out the week's meals had always seemed daunting to me. I thought that I'd get bored eating the same basic ingredients every day and/or not have the drive to get creative and switch things up mid-week, or worse, that I’d waste the food I’d spent all that time prepping.

However, that was before I spoke with Joel Gamoran — Sur La Table's national chef and spokesperson, and the host of a show called "Scraps" that teaches chefs at home how to make delicious meals from their food scraps. Fun fact: The Save The Food campaign actually teamed up with Joel for the second season of “Scraps” on FYI and A+E networks to help drive home the message that saving food isn't just good for your wallet — it's good for the planet, too.

According to Joel and Save The Food, Americans throw a lot of food away that’s perfectly usable — in fact each person discards over 20 pounds of food per month. So their goal is to help the average person fight that habit by meal planning and repurposing what was once considered scraps. And that starts with making the whole concept of meal planning less daunting while also proving to families and individuals alike that proper meal prepping can help them save time and money.

Think you're ready to get on the meal planning/food saving train? There's no time like the new year to make a healthy and eco-friendly change!

First things first, let's do away with any misconceptions you might have about what it takes to make meal planning work.

Here are 11 myths about meal planning versus the realities.

This is often people's knee jerk reaction to the idea of meal planning, but in fact, the opposite is true. If you make all your meal portions for the week at once, you're actually saving time in the long run.

Also, don't let the grocery store intimidate you. When you’re making your list, think about building blocks. All you need to grab is a starch base that's easy to make such as rice, couscous or quinoa, some veggies that look good to you, and a protein (vegetarian or meat) that you can either cook ahead of time or freeze and unthaw to cook the day before you're ready to eat it.

Actually, meal planning will help you stay on a budget more than falling back on ordering out will. Plus you don't have to spend a lot on ingredients, especially if you shop smart with meal prep in mind. If you stick to more basic vegetables and starches as your base, you can even splurge on the protein you include and still stay frugal.

What's more, you probably already have a lot of staples in your pantry or freezer that you’ve purchased previously that are just waiting to be utilized.

3. Cooking a lot of food all at once is a chore.

You can make cooking these meals as involved or uninvolved as you want, but for those who just want to get in and get out of the kitchen, it's all about boiling and roasting.

Start by cooking your starch in a pot on the stove, and at the same time, chop your veggies (or get them pre-chopped), toss them in some olive oil, salt and pepper, then roast them up in the oven for 30 minutes at 350 degrees. Done.

4. Portioning out meals is complicated.

If you're like me, when you hear words like "portion" you probably think it involves math, and get nervous. But never fear! According to Joel, you never have to touch a measuring cup when meal planning. Believe it or not, you can actually portion out each meal of the day by handful — two handfuls of your starch base, one for your veggies, and your protein can be about the size of a deck of cards. Sounds pretty simple, right?

Of course you can play around with the amounts depending on what you like/how much you can eat, but this basic measuring technique is a good starting point. Portioning will also help you make sure that you don’t waste food — which is better for your wallet and the environment. And, if you're looking to get back on the healthy eating track after the holidays, portioning is very much your friend for that, too!

5. You end up eating the same thing every day.

Just because the base is the same doesn't mean that the meals themselves have to be. If you’re getting tired of your meals by mid-week, don't just toss or skip them! It’s easy to change up your meal into something brand new just by adding a sauce or some seasonings.

For example, you can also sauté the veggies in sesame oil, add some leftover wontons, and poof, you've got Chinese stir fry. Or you can add a chicken or vegetable stock and make a hearty stew.

"As long as you have that base, you can transform it into so many different things," says Joel.

All it takes is a little ingenuity, and you've got a great dish on your hands.

You will have to freeze some of your later-in-the-week protein portions if they're not vegetarian, but it's a common misconception that doing so will make them taste any less delicious. In fact, according to Joel, frozen fish is actually better than fresh, because that's how it's initially preserved by fisherman when it's caught. So the longer it stays frozen, the fresher it is.

And for any food scraps that you don’t end up using throughout the week (like broccoli stalks, brussels sprouts ends and potato skins), putting them in the freezer is a great way to press pause and preserve food until you’re ready to eat it. Vegetables can last 8 to 10 months in the freezer, so if you're doing some holiday cooking this winter, consider saving those veggie scraps for meal prepping in the new year.

Delicious food doesn't always win beauty contests. In fact, some of the tastiest dishes may not look that attractive at first glance. Like anything else, beauty comes from within, and if what's within is super tasty, then you've got nothing to worry about.

So even though your prepared meals might not scream Instagram-worthy, know that doesn't mean they won't taste awesome.

8. You have to meal plan for the whole week.

Good news — you never have to do something you don't want to do! Just make enough over the weekend to last you for the number of days you want ready-to-go meals, and feel free to celebrate Friday with takeout.

Save The Food's Meal Prep Mate can also help you prep three, four or five meals for breakfast, lunch or dinner, so if you want to plan the whole week out, you can do it easily.

And don't fret if you do end up making too much. You can always freeze the meal for later, or give it to a roommate or friend who may love a home-cooked dinner or lunch.

9. It's hard to be creative when you're so busy.

There's no need to stress about making your meals fun and unique — it's as simple as adding sauces and toppings. You know how when you get a salad at a salad bar and the last accents make all the difference? It's the same principle here.

“It’s all about the condiments and textures that are kind of like add-ons on the top," explains Joel. And the more you play around, the more delicious combinations you'll discover.

10. This is much harder to make work if you're vegetarian.

It doesn't need to be. There are so many meat-free proteins that can go beautifully with your vegetables and grains. For example, tofu, beans and eggs are some of the most transformative proteins out there.

Seitan can also turn plain old rice and veggies into a delightful Asian dish with very little seasoning and effort.

While you’ll inadvertently be cutting off stems and peeling outer layers of vegetables while prepping, but you don't have to just toss them all in the trash. There's so many ways you can turn your food scraps into delicious meals.

"Each scrap is like its own little puzzle," says Joel.

For example, you can take your leftover potato peels, toss them in salt and pepper, sriracha and olive oil, roast them in the oven for 15 minutes and bam, you've got some tasty potato chips. Or you can take empty shrimp tails and boil them in some water with a cheese cloth full of herbs, and you've got a delicious shrimp stock to dress up your pasta dishes. And here are some more "scrappy" recipes you can try.

With just a little creative thinking, you can make easy, delicious food, save money, and help stop food waste all at the same time.

It's amazing to think that by doing so little, you can achieve so much for yourself and the planet. And it gets even better if you follow Joel's advice on utilizing food scraps.

“You’ll be so surprised when you cook scrappy how much food you actually have.”

So what are you waiting for?

You can learn more about cooking scrappy and making meal prep work for you by trying the Meal Prep Mate and watching "Scraps" on FYI and A+E.

Learn how to meal prep and Save The Food