It's not an elaborate treehouse — it's a new affordable housing concept. 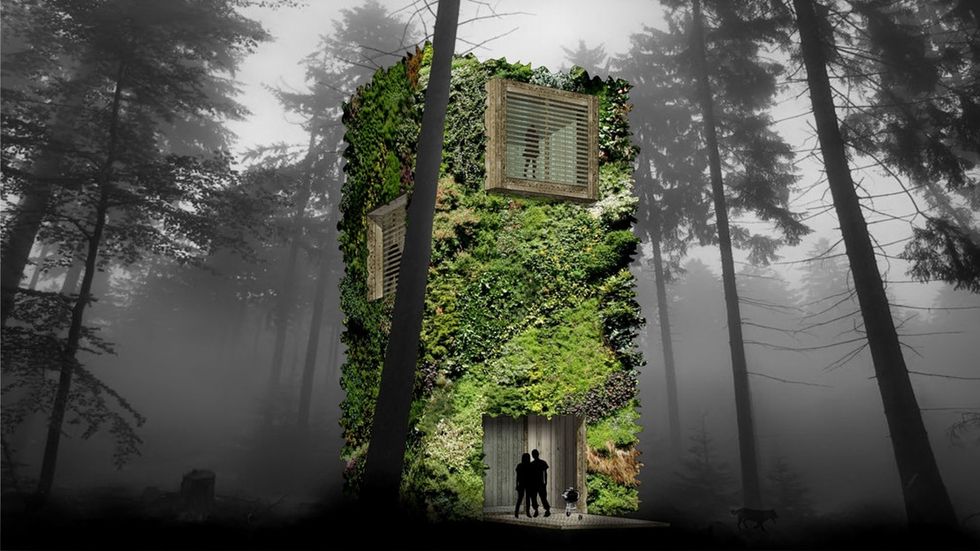 What kinds of places do you think of when it comes to "green" cities?

If you're like me, you're probably imagining places with subways and solar panels, electric cars and urban farms. And you'd be right. Those things are important for a city to be considered "green."

A 2015 study of the nation's 150 largest cities by Nerd Wallet ranked eco-friendliness by looking at where people live, how they get around the city, where their energy comes from, and the quality of the air. Some examples of the nation's greenest cities include...

I guess it's not all dirty, filthy politics.

Take me there. Now.

Believe it or not.

But what if I told you green cities could look like this:

This is OAS1S, the brain baby of Dutch architect Raimond de Hullu.

It's his template for building cities that are green in the truest sense of the word. In an interview with Fast Company, De Hullu explained his vision:

"We need a new building typology that goes beyond the usual technical sustainability. We need a 100% green concept, not only technically but visually as well, and which is desirable plus affordable at the same time."

...and communities that blend with forests.

And best of all, he wants OAS1S to be an affordable housing opportunity. For everyone.

To achieve that, he wants these communities to be set up as land trusts. Under this model, a community nonprofit is formed to buy and own land, and the homes built on that land are owned by the occupants. According to the Democracy Collaborative:

"By separating the ownership of land and housing, this innovative approach prevents market factors from causing prices to rise significantly, and hence guarantees that housing will remain affordable for future generations."

OAS1S is still only a concept, but de Hullu is searching for a suitable place for a pilot community.

He hopes the first location can be in an established city, which would be great for visibility, especially if it proves an effective model.

But he also sees value in piloting OAS1S in a less developed vacation setting.

Either way, de Hullu wants the essence of the project to remain "constructing a true balance between architecture and nature."

De Hullu's goal is simple: build communities that are good for people and good for the planet.

And the last thing, which I cannot stress enough, is that we could live in tree houses!

How cool would that be?

Watch an overview of OAS1S: