In a touching post, Michelle Obama said she was 'overwhelmed' by her portrait. So are we. 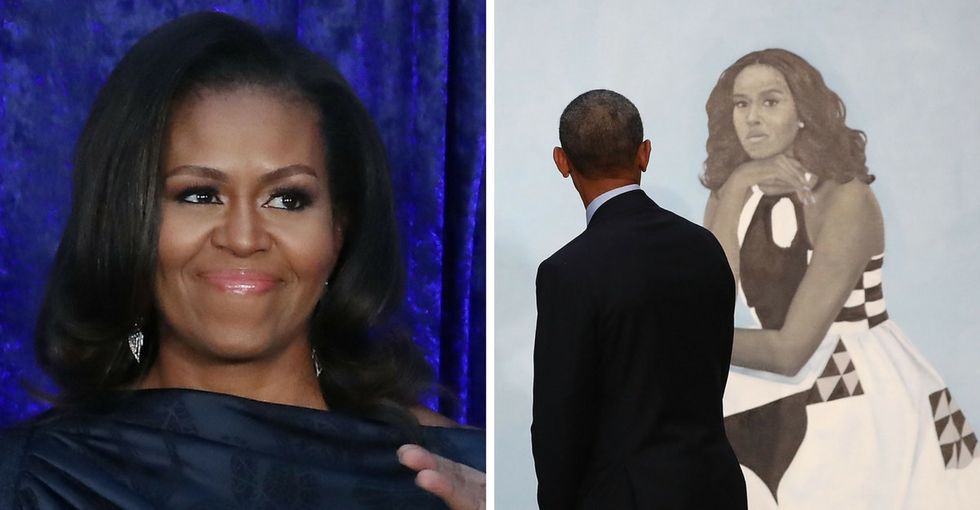 On Feb. 12, 2018, the portraits of Barack and Michelle Obama were revealed at the Smithsonian's National Portrait Gallery in Washington, D.C.

It truly was a historic moment. The artists behind both of the Obamas' portraits are black. There hasn’t been a black artist previously been commissioned for a presidential portrait for the National Portrait Gallery.

After having lived in the White House for eight years, it's easy to assume the Obamas are used to these types of history-making days. But as a touching post on Michelle Obama's Instagram suggested, the moment was still a bit surreal for the first black woman to call the White House home.

"As a young girl, even in my wildest dreams, I never could have imagined this moment," Michelle Obama began her heartfelt post.

She continued in the caption:

"Nobody in my family has ever had a portrait — there are no portraits of the Robinsons or the Shields from the South Side of Chicago. This is all a little bit overwhelming, especially when I think about all of the young people who will visit the National Portrait Gallery and see this, including so many young girls and young girls of color who don’t often see their images displayed in beautiful and iconic ways."

"Beautiful and iconic" is right. Handpicked by the Obamas, Sherald and Wiley's paintings reflected the aesthetics of their previous works, bucking the more conventional surroundings and styles seen in other presidential portraits at the Smithsonian.

The portraits of George and Laura Bush. Photo by Saul Loeb/AFP/Getty Images.

The portraits of Bill and Hillary Clinton. Photo by Mark Wilson/Getty Images.

Other first ladies' portraits were powerful and moving in their own rights, to be sure. "For me, having the honor of having a portrait in the Smithsonian is just beyond words," Hillary Clinton had explained during her own portrait's reveal. Laura Bush said she was “especially happy to invite an artist from [her] mother’s childhood home of El Paso, Texas, to paint [her portrait],” speaking about its creator, Aleksander Titovets.

But the Obamas truly were unlike any other first family in U.S. history. And their portraits don't shy away from that reality — they embrace it beautifully.

"I am so proud to help make that kind of history," Michelle Obama concluded in her touching post before expressing gratitude for Sherald. "Thank you, Amy — it was a joy to work with you and get to know you."

Learn more about presidential portraits at the National Portrait Gallery.