Ian McKellen got real candid about Hollywood sticking up for straight, white men. 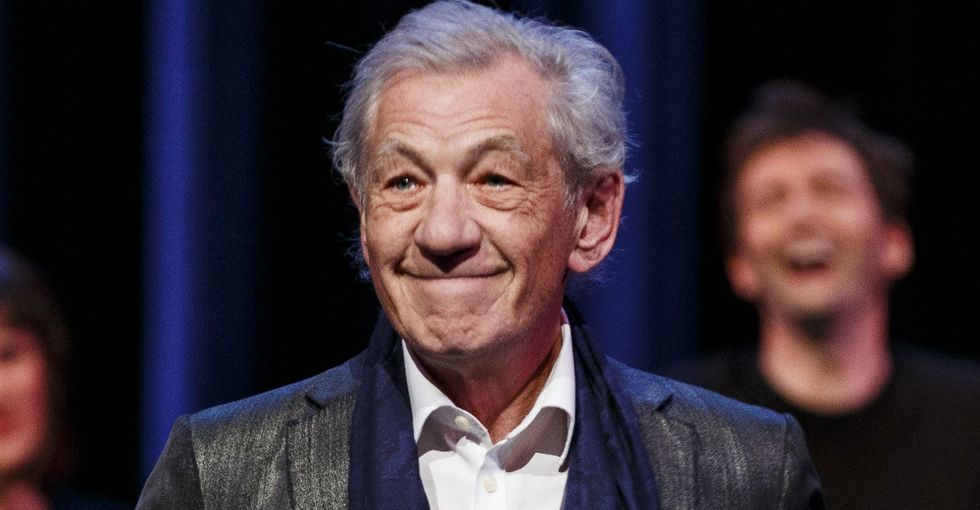 Hollywood has some serious issues. It treats women terribly, overlooks people of color, and erases disabled and LGBTQ people from its stories, for starters.

Someone who doesn't need reminding of the industry's embarrassing failings is openly gay actor Ian McKellen.

The 78-year-old stage and film actor who's spent the better part of his life working in the industry got candid with Time Out London about Hollywood's tendency to only defend and empower white men and their heteronormative stories.

Take Albus Dumbledore, for instance. Years ago, author J.K. Rowling divulged that the wizard headmaster in "Harry Potter" is gay. Yet in the newer movies in the franchise, filmmakers have shied away from allowing the character to display any sense of explicit queerness, to the disappointment of many fans.

Time Out London's Phil de Semlyen asked McKellen, who routinely gets mistaken for the actors who actually played Dumbledore on screen — Richard Harris till his death, then Michael Gamdon — about the ongoing controversy: "The younger Dumbledore isn't explicitly gay in the new 'Fantastic Beasts' movie. Why do you think there are so few gay characters in blockbusters?"

"Isn't he? That’s a pity. Well, nobody looks to Hollywood for social commentary, do they? They only recently discovered that there were black people in the world. Hollywood has mistreated women in every possible way throughout its history. Gay men don't exist. 'Gods and Monsters' [in 1998], I think, was the beginning of Hollywood admitting that there were gay people knocking around, even though half of Hollywood is gay."

You can't knock him for a lack of candor.

Do you think his comment seems melodramatic or unnecessarily harsh? They seem pretty on-the-nose to me.

Keep in mind, Hollywood is just now reckoning with its massive sexual abuse epidemic, its white-washed and racist systems of production, and the fact the industry is still run by an overwhelmingly straight, cisgender, white, and older group of men who choose which projects get made and by whom.

McKellen's comments also come on the heels of a damning new report from GLAAD on LGBTQ representation in film.

In its Studio Responsibility Index, the advocacy group found a sharp decline in the percentage of queer-inclusive movies across the largest production studios. Between 2016 and 2017, that figure dropped from 18.4% to 12.8% — the lowest since GLAAD began tracking data six years ago.

It's easy to assume progress just happens. But it doesn't.

McKellen rightly suggested that Hollywood continues to fail women, people of color, and other marginalized groups. But he's also been around for quite a long time, and he's hopeful the future is bright for LGBTQ people — on screen and off.

"When I go to schools to talk about gay rights, the kids can't believe it," McKellen explained of younger generations showing acceptance. "It's not an issue for them."

Queer kids deserve to see a world on screen that reflects their own. And if it takes a gay wizard flicking his wand to help send that message, sign me up for the next train to Hogwarts.