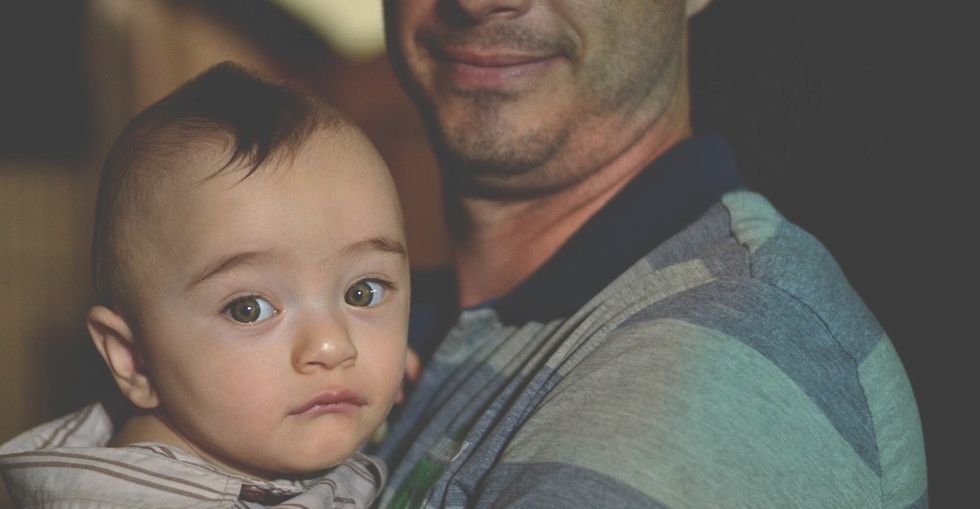 When my wife returned to work after parental leave, I took my first trip to the grocery with two kids.

Little did I know I would return home feeling like a hero.

On a Monday morning, I pushed the green cart with flame decals through the second set of sliding doors and toward the deli. My 3-year-old son was strapped in the seat and my 3-month-old son was wrapped against my chest.

As a stay-a-home father strolling through the grocery, I felt conflicting emotions — love for caring for my sons and frustration with being an unemployed 37-year-old man.

At the deli, I exchanged pleasantries with a young woman behind the counter and ordered a pound of sliced turkey breast. I was immediately surrounded by a group of female employees. They leaned close to admire my infant son as he raised his bald head from the green cloth wrap.

“I never could get mine to like the wrap," one said.

“I bet y'all have so much fun together," another said.

“You are the best dad ever," another said.

I swelled with pride. Maybe they're right! Maybe I am the best dad ever.

I soaked in the praise before tossing my sliced turkey into the cart and heading toward the produce.

As I strolled, more comments came from fellow shoppers, and I absorbed them, giving little thought to the reason why I merited heightened attention.

“That is one way to keep 'em warm," an elderly woman said.

“Man, you are taking this dad thing to the next level," a bag boy at checkout said.

The series of verbal high-fives inflated my ego and, after receiving the receipt from the cashier, I smiled and pushed our flaming green cart through the sliding doors like a rock star walking offstage.

I had no clue I was benefiting from male privilege.

I enjoy the attention I receive as a stay-at-home dad; it's nice to have impressed eyes turned on me.

My rationale for basking in the compliments is that I spend most of my time wading through dirty diapers, spit-up, and spilled Cheerios. I deserve some praise, right?

I thought so, until one Sunday morning I sipped coffee and read an article (a rare kids-free moment in the kitchen) about faux male feminists. The article included comments from Tal Peretz, a sociology professor at Auburn University, who described a concept called “the pedestal effect."

As I read, my male privilege became uncomfortably visible. The pedestal effect refers to when men receive undeserved praise, attention, and rewards for performing work traditionally done by women, like carrying a baby in a wrap.

At the grocery store, I willingly stepped on the pedestal and used my privilege to gain attention for basic child care.

And as I reflected on Peretz's words, other pedestal moments flashed in my mind. This realization was not something I could ignore.

If you believe in gender equality, it is not hard to understand why it is problematic to place one gender on a pedestal for doing the bare minimum, while another bears the bulk of the child care. Not only is it unfair, but it's also not in the best interests of families and can place stress on them when parenting roles are unbalanced.

For men who value gender equality and healthy families, assisting in lowering the pedestal is imperative.

After reading Peretz's comments, I wrestled with how to respond and, hopefully, how to help other dads become more aware of this privilege. I reached out to him to discuss the pedestal effect, and he offered practical ways to counter male privilege.

He reminded me of the complexity of privilege and how it operates on different levels — individual, interpersonal, institutional and structural.

We cannot dismantle institutions and structures by ourselves, but we can start with naming our privilege and giving credit to women wherever it is due.

Naming our privilege through raising awareness is a good place to begin, because men have been socialized to interact with women in particular ways, and it can be difficult for us to see how we are perpetuating gender inequality.

Peretz recommends using resources such as privilege checklists to identify your advantages. These resources can help us move unconscious thoughts and behaviors into the light of awareness. Ideally, this work will lead to interpersonal change.

Men can make the effort to closely listen to women to understand how they perceive male privilege. And, most importantly, we need to believe women.

Maybe you remain skeptical that a pedestal effect exists for fathers. Ask a mother whether she believes fathers benefit from undeserved praise. Her answer might surprise you. Men get attention and praise for doing work women do every day.

Raising awareness and listening are important steps, but I also wanted to know how to best respond when given undeserved attention.

Peretz recommends reacting “with humility and a sense of humor," while bringing attention and awareness back to the work women have been doing for a long time.

For example, at the deli, I could have redirected the conversation. I could've used one of these playful responses suggested by Peretz: “Yeah, I'm really glad that my wife did all the heavy lifting of pregnancy and childbirth so I'd get to enjoy this little monster," or “I really appreciate that, but it's nothing my mom didn't have to do for me!"

I want to do a better job of stepping off the pedestal and challenging sexist beliefs about parenting.

I want to better align myself with the women who have been doing this work for generations and assist them in creating more balanced roles within families. And I want to share the most important lesson I've learned while reflecting on this issue, which is that not only should I do this work because it is the right thing to do, but also because I need it.

Men need to be liberated from the rigid forms of masculinity that create a pedestal in the first place. Only when we step off them can we hope to be free.

This story originally appeared in the On Parenting section of The Washington Post and is reprinted here with permission.

His perspective is spot on.

"Time is the one thing we cannot increase.”

Over his seven years as host of “The Daily Show,” Trevor Noah brought us laughter and valuable insights, even with a pandemic and political upheaval. He made such a positive mark that the announcement of his departure from the show came as bittersweet news to fans.

During an interview with Hoda Kotb of “Today,” Trevor Noah gave further explanation to his personal decision to leave, and in typical Noah fashion, it touched on something universal in the process.

Cat hilariously rats out owner in front of the landlord

Some people, on the other hand, get creative. I once came across a post on social media where someone claimed their pit bull puppy was actually a Silver Labrador. But one woman on TikTok was harboring a secret cat in her rental that had a no pets policy, and either her cat was unaware or he was aware and was simply being a jerk.

“Seeing a grown man get so excited about Capri Sun is extra wholesome."

'Dee' the delivery guy stoked to get some Doritos.

Recently, one of the Barnetts’ delivery guys, a joyous fellow that we believe is known as Dee, went viral on TikTok because of his positive reaction to receiving some snacks during his deliveries. The snacks are tasty, no doubt. But it’s also wonderful to feel appreciated. After Toni posted the video it received over 100,000 views.

Keep ReadingShow less
kindness
Get stories worth sharing delivered to your inbox
By signing up you agree to Upworthy's privacy policy.
popular

"She told me to keep doing something good."

Jacalyn Wetzel
Photo by Kelly Sikkema on Unsplash
woman holding a cup of tea, writing in a notebook

It's no secret that everyone could use a little kindness in their lives and it can come in many forms. Sometimes it's the neighbor cutting your grass when your husband's away and you're too busy to get to it yourself. Other times it's sending a card to the elderly widow down the street.

One woman in Arkansas has taken to spreading kindness through writing letters to strangers. Allison Bond, 25, started writing letters over a year ago during COVID-19 when she couldn't attend school due to her medical condition. Bond has cerebral palsy and is at greater risk for serious illness should she contract the virus. Writing letters was an act of kindness that didn't require a trip out of the house.

Bond began by writing to soldiers and inmates. In fact, the first letter she received back was from a soldier. Bond told 5News, "I have one framed from a soldier. He had all his battle buddies sign it. So I framed it so I could put it up." She's kept every letter she's received.

Keep ReadingShow less
Get stories worth sharing delivered to your inbox
By signing up you agree to Upworthy's privacy policy.
Trending Stories
tyler adams
Celebrity

A pediatrician's viral post will bring you to tears and inspire you to be a better person.