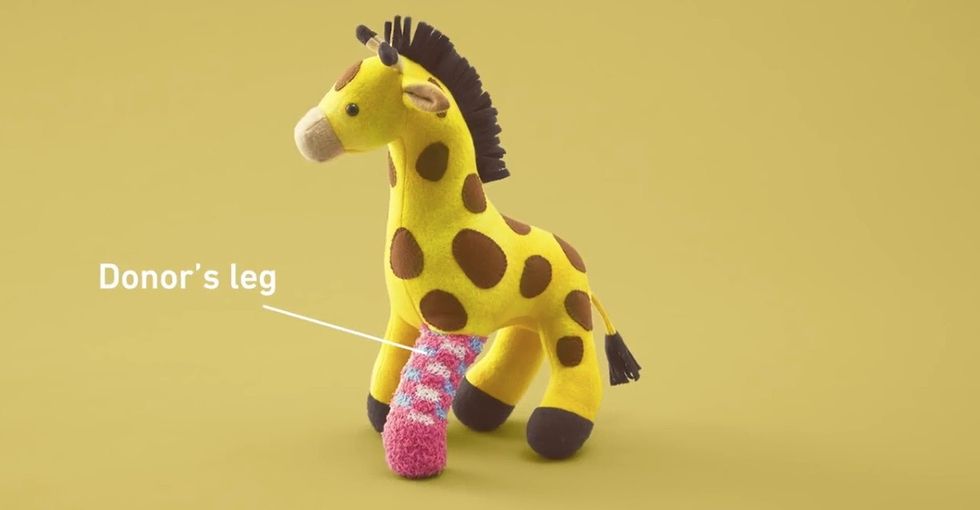 Do you know a stuffed sheep or giraffe that could desperately use a leg up?

A new program is giving stuffed toys another chance to bring joy and love to someone special. Old toys are repaired and given new parts using donor limbs from well-loved toys that are no longer played with. This unique up-cycling is all done by mail and gives these special animals a new lease on life while teaching kids about a really important topic.

Japanese designers Akira Suzuki and Togo Kida, the founders of Second Life Toys, have fond memories of repairing their own torn or broken toys as kids, using parts from other stuffed animals — much like how organ transplants help save people.

"What we tried was more than fixing a toy that was broken, it was actually trying to fix something in an even better way. " Togo wrote in an email. "This, we thought, might be a good way to convey organ transplant in a positive way."

The hope is that by teaching children the benefits of organ donation, they can start to break down the barriers that surround transplants, especially in Japan, by playing up the positive results.

First, the process begins with a torn or broken stuffed animal.

In this case, Mr. Giraffe might be in need of some help with his front left leg.

If so, the giraffe's owner can mail him to Second Life Toys.

Then a donor toy — perhaps a toy that, while loved, doesn't get played with much anymore — will give a limb to the original toy.

Here, an arm from a stuffed monkey is used to replace the giraffe's "broken" leg.

Finally, the repaired toy is sent back to its owner.

Mr. Giraffe is on the mend!

And then children are asked to reflect on how the transplant improved their stuffed animal's life.

Once their stuffed animal is out of recovery, the toy's child caretaker also gets to send a thank-you note to the donors.

It's a full-circle experience that introduces the concept of organ donation in an accessible and relatable way.

Hopefully, this makes the idea of organ transplants less scary to children, helping to reduce the stigma that surrounds the concept as they grow older.

This is an especially important program in Japan, where organ donors are in short supply.

In fact, less than 2% of people on Japan's organ donor waiting list will find a match. Of the roughly 14,000 people on the waiting list annually, that means fewer than 300 will receive transplants.

Japan ranks far behind the rest of the industrialized world when it comes to organ donation, too. Here's how Japan's numbers compare to the U.S.:

This is a problem nearly 50 years in the making.

In 1968, Dr. Juro Wada performed Japan's first heart transplant. The heart donor was, in Wada's mind, brain-dead, though this was still a murky topic back in the '60s.

The surgery was highly controversial, and as a result, "brain-dead" organ donations were halted for more than 30 years.

Plus, religious beliefs and apprehension around the topic of organ donation have scared away potential donors.

It's hard to talk about organ donation without talking about death, a topic many people, especially those in good health, just don't want to think about. And when they do, religious beliefs suggest bodies should be intact and cremated after death.

Today, Japanese citizens in need of a transplant have gone as far as leaving the country in hopes of receiving one elsewhere, since chances are slim in their home country.

So far, the response to the Second Life Toys program has been overwhelmingly positive.

Akira and Togo are hearing from people around the world who want to donate their toys and be a part of the project. It's not just children either — adults want their toys fixed as loving tributes for family members on the transplant list.

While it remains to be seen what effect Second Life Toys will have on Japan's organ donation crisis, the project is a creative step in the right direction. "The response we are getting so far is phenomenal," Togo said.

While the U.S. is comparatively better off in regards to organ donation, people die every day waiting for a transplant.

But there's a really simple way you can help change that, too.

Register as an organ donor! The U.S. Department of Health and Human Services has a super-simple breakdown of how you can go about getting signed up (it varies slightly from state to state). You can also consider joining the bone marrow registry. Bone marrow is a living donation that helps people with blood cancers.

Whether it's talking about donation, sharing well-loved toys, or giving the gift of life, we can all do our part.

To learn more about Second Life Toys, visit their website or watch their introductory video below.