How one man is fighting to keep a 104-year-old woman safe at home. 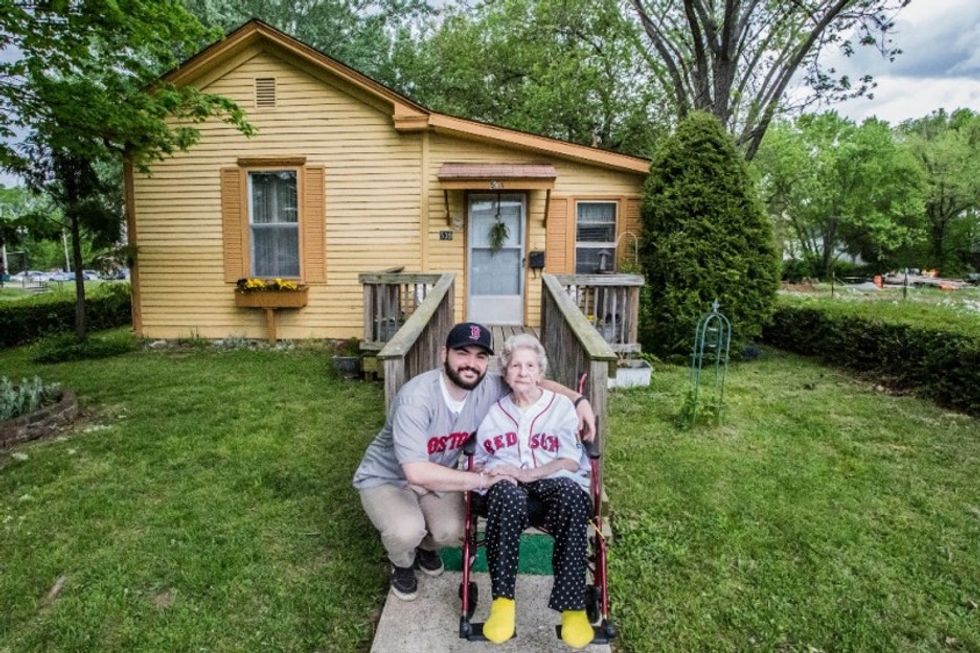 Evan LaPointe met Audrey Roberts when he was only 3 years old.

She was a volunteer foster grandparent, and she would take care of Evan when his parents were out of town. "She would cook me food and everything and just spoil me like she was my own grandmother," Evan told Upworthy.

Now Evan is 21, and Audrey is, astonishingly, 104. They're neighbors and have remained close friends.

As you can imagine, Audrey's life has been filled with 104 years of ups, downs, surprises, and heartbreaks.

With an eighth-grade education, Audrey worked for most of her life at a commercial laundry as a marker and checker. She never made more than minimum wage, but she cherished the hard work. Ultimately, she managed to save up about $200,000 throughout her career.

Audrey's husband, John, died when he was 70. Her only son, Earl, died in a car accident at 21. And just four years ago, Audrey broke her hip and had to spend six months in a physical therapy facility. Being away from her home that long was a heavy burden that weighed on her conscience and mental health. "Her overall mentality just got really negative," Evan remembers. "I mean, she was 100 years old. So she wanted to be in her home."

Today, fully recovered and fending for herself, she does laps around her living room to stay active and never misses her hair appointment every other Friday.

But time and medical expenses have caught up with Audrey's savings.

No one could possibly plan to live to 104. So despite working hard for her entire life and living within her means, Audrey's savings has dried up, and her Social Security checks stopped covering her daily in-home medical care.

Soon, Audrey may have to face leaving her cherished home to live out her final years in a care facility.

But not if Evan has anything to say about it.

Audrey outside her home in Kentucky. Photo courtesy of Evan LaPointe.

It's an "urgent plea," he said — a plea to caring people everywhere.

"We just remember how hard it was [when she broke her hip] and just how she got mentally," Evan said. "So my brother brought up the idea of trying one of the GoFundMe's. We gave it a shot, and so far we’re doing pretty good."

"It’s really important to me and to all of us just to keep her home and keep her happy," Evan said. "That’s her last wish. When she passes, she wants to be in her home."

Almost 530 people have donated so far, and the campaign has even gotten the attention of GoFundMe CEO Rob Solomon.

"This campaign is very typical of what can happen on GoFundMe," Rob told Upworthy. "Our core purpose is to empower people to help people."

GoFundMe differs from other crowdfunding sites in that it raises money for causes. So while the campaign is designed to help one person, the motivation behind each dollar seems to be a larger, more systemic one. Many people see themselves or their loved ones in Audrey's face.

"One of our core values is helping to spread empathy," Rob said. "And I think what I’m seeing in the comments on this campaign is a lot of people are saying, 'Wait, this can happen to me.' ... So though it's just helping one person, it's really bringing awareness to issues. I think it's getting people involved in giving."

What are the issues forcing Audrey out of her home? Take your pick.

"One stat that’s really staggering is that half of all Americans, if they had to come up with $400 for an emergency right now — can’t," Solomon said, citing an article this month in The Atlantic. "The income inequality problem in our country, and more importantly on a global basis, is really big. Perhaps getting bigger. ... Relying on government to come together and solve it, or nonprofits to solve it, I think is too daunting a task. It’s really local communities that have to band together to help people out when life hits them."

For Evan LaPointe, though, the issue is a simple one: dignity.

"Our goal is to touch the hearts of people who believe dignity is vital to life," says the GoFundMe page. And in my conversation with Evan, he brought up the subject multiple times.

Whatever reasons people have for donating to Evan's cause, he's already overwhelmed by the support and positivity.

"We’re always seeing negative stuff going around," he said. "But we’ve gotten a lot of cool things from people just saying, 'This is great what you’re doing.' Just seeing something positive and other people noticing it is really cool. I mean, we just wanna keep her home no matter what. We’re just doing whatever we can."