Here's what one Holocaust survivor has to say about the rise of the Antifa movement. 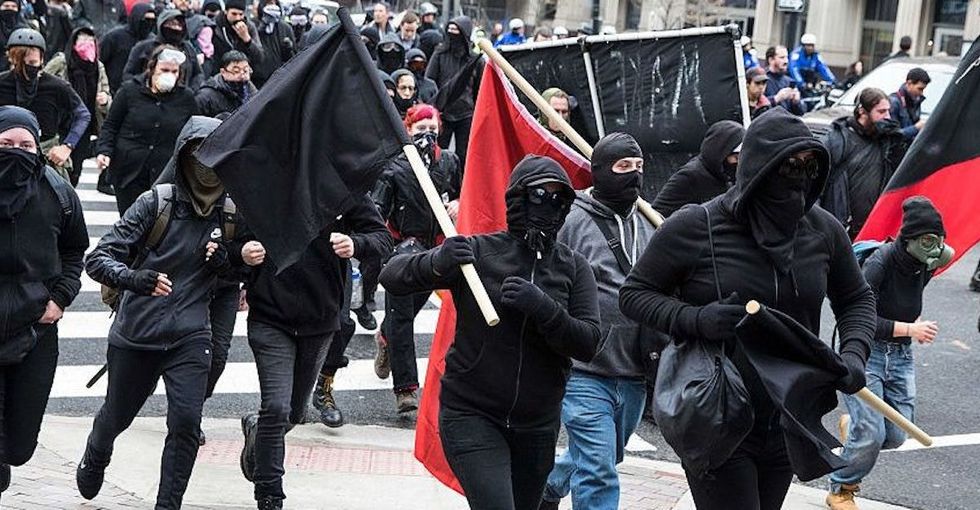 At a recent anti-hate rally in Berkeley, Joey Gibson, leader of the extreme right-wing, white supremacist group, Patriot Prayer, strolled directly in front of me, his three burly bodyguards in tow.

A few people nearby pointed him out, shouting his name.

I had an immediate visceral reaction to the sight of this man, whom I consider to be a neo-Nazi. To my eyes, Gibson and his men were angling for conflict; their swagger left no doubt.

And I stood there shaking, my homemade sign in hand. "Hate speech leads to Holocaust," it read.

I am an 80-year-old Holocaust survivor.

We learned that the young men and women around us, dressed in all black, were trained not to engage in confrontations, except to protect demonstrators like us if we were attacked by white supremacists like Gibson.

It was my first encounter with Antifa, the movement comprised of young militant antifascists who have been vilified in some of the media for their tactics.

So even though I was afraid of Gibson and his thugs, I felt comforted — not by the presence of any police officer that day, but by the presence of the Antifa. I feel gratitude to these young people for being our first line of defense, for being willing to stand up to the hateful actions of neo-Nazis and white nationalists like Gibson.

I know from experience what it feels like not to feel protected.

And I've seen firsthand the impact hate speech, under the guise of free speech, can have. As a child in Nazi Germany, I saw young boys and girls being indoctrinated into becoming mass murderers of their neighbors. Later I learned how grown men, destroyed by fear, were rendered incapable of protecting their loved ones. I learned that a crowd could be moved to heinous actions.

From the time I was 5, I was told never to mention that our mother was Jewish. This was about the time my half-sister, my father's oldest daughter from his first marriage, unexpectedly came to live with us. She had seen her mother and stepfather violently removed from their home, never to be seen again.

When I was 8, two sinister-looking Gestapo, the secret Nazi police, knocked on the door of our makeshift bomb shelter, a converted coal cellar. Berlin was under the final heavy bomb attacks of the Allied Forces. And the men had demanded that my mother accompany them, threatening to set their dog on her and shoot her if she tried to escape.

Everybody in the cellar with us that day knew that my mother's only crime in life was being a Jew, defined not by her profession of a given religious preference but by racial law.

Yet no one dared to speak up for this mother of three young children.

Nobody said a word of encouragement as she was torn away from her children. Nobody demanded these men desist from sending one more Jew to her death in a concentration camp.

The time without our mother seemed endless. We were scared and hungry in that poorly lit, cold, uncomfortable cellar. Some of the neighbors had told us my mother would never return, and they had begun to discuss with which of them each of us children would have to live.

My mother managed to escape and come back to us. But for the rest of my life, I have remembered the fear that crept over me as I faced the possibility of never seeing her again.

Soon, the bombing ceased and the Soviet Army liberated our neighborhood. But I saw the photos in the newspapers of some of the millions who had not been as lucky as we had, those who had had no one to protect them.

I could not trust that such an experience would not repeat itself.

In 1947, my mother, my younger brother and I immigrated to Venezuela and learned there what life was like under a long military Latin American-style dictatorship. Once again, I saw how some people were scared and read how some were detained, deported, and even killed. Again, I was not sure who would defend us if something happened to our family.

And when I came to study in the U.S. in 1955, in what I had erroneously believed was the cradle of freedom, I had a real-life crash course in the lack of civil rights for people of color, the murderous laws still prevalent in many Southern states, and the education, employment, and housing discrimination in the North.

I later learned a startling truth: that the racial laws of the Nazis, which categorized me as a "Jew of the Second Degree" (due to my Jewish mother and Gentile father), were based on U.S. race laws. I had fallen for some of the powerful propaganda this country disseminates abroad through its mass media.

But I woke up and got involved. I learned to speak up and organize for civil rights, against the war in Vietnam and, later, against the many invasions of other countries and ongoing discrimination.

And now here I am, more than 70 years after walking out of that dank cellar in a Berlin neighborhood, faced once again with neo-Nazis spewing and spreading their hate and beliefs about white supremacy.

Far too many people in this country are still excluded and even killed for reasons that were used during World War II to send populations to the gas chambers. We don't have official concentration camps as such in the U.S. (anymore), but the prison-industrial complex is thriving and ever-expanding immigrant detention centers are crowded and inhumane.

So, yes, I am scared of what fascists can do. I have little confidence that local police — ever more heavily armed with military weaponry and unskilled in dealing with the vulnerable in our societies — will protect those confronted by neo-Nazis.

Make no mistake, these neo-Nazis and white supremacists are serious.

The 2017 murders in Portland and Charlottesville demonstrate that.

In Europe, different generations of young antifascists committed to preventing acts of violence to vulnerable populations, resurface from time to time.

I feel comforted by the fact that these young antifascists exist here in the U.S., too.

This story originally appeared in YES! Magazine and is reprinted here with permission.