Finland is really good at stopping bullying. Here's how they're doing it. 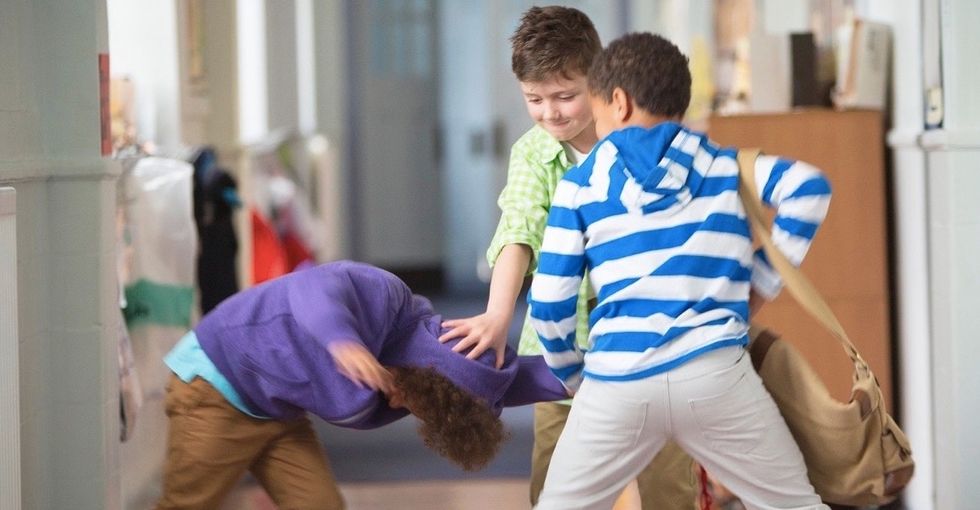 Imagine you're back in middle school or high school. The bell just rang, so you're walking to your next class, minding your own business.

Then you walk around the corner and see this:

What would you do?

Unfortunately, this is a pretty common scene.

About a fourth to a third of all students report that they've been bullied in school.

And while a single bad encounter might be easy to brush off, bullying often doesn't happen just once. For many kids, it's a long, awful campaign of continual harassment, injury, and exhaustion.

Even the most resilient kids can have trouble dealing with that. And bullying can also cause depression, anxiety, health complaints, and even dropping out of school. It's not great.

So back to that question: If you saw bullying, what would you do?

Finland has been asking folks this question for a while, and they found that the answer people give is really important.

Finland has one of the most successful education systems in the world, so it's not surprising that they've used this question about bullying to pioneer a brand new and super effective bullying prevention program in schools.

KiVa includes many different resources, like tools for teachers and parents and in-classroom lessons. But one of the most interesting aspects is how the program focuses on teaching bystanders what to do if they see bullying. Teachers are not always around, so they can't always help. But other students often are.

"Our findings are the first to show that the most tormented children — those facing bullying several times a week — can be helped by teaching bystanders to be more supportive," UCLA professor Jaana Juvonen, said in a press release about a recent analysis of KiVa's efficacy.

One of the most interesting ways KiVa teaches this bystander empathy is through computer games and simulations.

In one of the games, the kids take control of cartoon avatars that are put in a variety of bullying situations they might encounter in school.

"For instance, they might witness a bullying incident and they have to decide what to do; whether to defend the victim or do something else," Johanna Alanen, KiVa's International Project Manager, told Upworthy in an email.

"There are different options on how to defend the victim," Alanen explained. "Their choices have consequences and lead to new situations.

Basically, the programs are kind of like choose-you-own-adventure stories for bullying, allowing the kids to see what consequences might come from certain actions, all in a virtual setting.

The students are also given advice and feedback about what to say to someone who has been bullied.

"In the game, students can practice how to be nice to someone and what kind of nice things you can say to someone who would like to be included in the group or is new in the school," said Alanen.

By asking the kids what they would do in certain situations and giving feedback and advice about it, the program can help teach the students to be more empathetic and supportive of bullying victims.

And the data shows that the program works too.

Juvonen's analysis found that KiVa reduced the odds of a given student being bullied by about one-third to one-half.

That's huge. And not only that, but early data shows that the program might also help reduce depression and increase self-esteem for kids who have already been bullied.

Now that Finland has adopted KiVa as their national anti-bullying program, it's being tested other countries too — Italy, the Netherlands, and the U.K. — and it's being evaluated in the United States.

Bullying is a perennial, awful problem that's tough to eliminate. And there's probably never going to be a one-size-fits-all solution.

But programs like KiVa show that even at a young age, empathy is one of the best tools we have to make the world a better place.