Feeling hopeless after Charlottesville? 16 ways you can make a big difference. 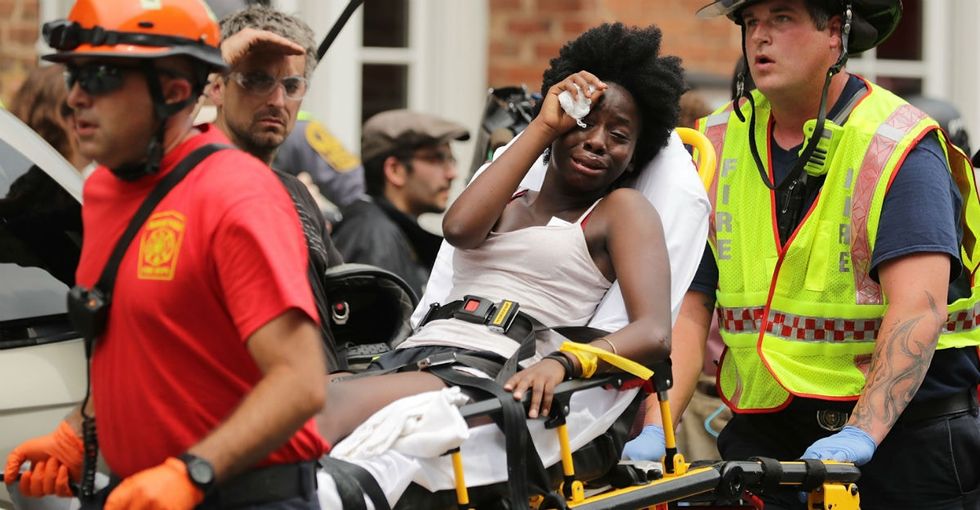 This was the scene on Aug. 12 in Charlottesville, Virginia.

Those are rescue workers aiding an injured, shaken woman who was plowed into by a car driven by an alleged white supremacist. In 2017. In America.

It's a difficult photo to see — as are many of the other photos taken over the weekend — but it's important we all see it and recognize this image for what it is.

The terrorist attack, allegedly carried out by a 20-year-old from Ohio who was in town supporting the "Unite the Right" white nationalist conference, left one victim, counter-protester Heather Heyer, dead. It injured 19 others.

It's easy to feel helpless in the days following an event like Charlottesville. If you're in a position of privilege, it's maybe even easier to intentionally tune out — to put on your headphones and ignore the bigger problems waiting outside your door. But it's important we act.


If you're feeling hopeless after the events in Charlottesville, here are 13 ways you can help make a difference:

1. First and foremost, make sure you are OK.

If you're a person of color or part of another targeted marginalized group, the events in Charlottesville may have been exhausting and painful to see on TV or witness firsthand. DoSomething.org has a coping with discrimination self-care guide that includes tips like mindfully disconnecting from our often chaotic world and finding ways to channel your anger into constructive actions.

2. Become a member of the NAACP.

The NAACP is working tirelessly across the U.S. to counter the hateful forces like the ones on display last weekend. Join forces with the national group or find a local chapter — like the one in Charlottesville — to get involved.

3. Follow Sesame Street's lead and go out of your way to do something nice (big or small) for someone each day this week.

Give an extra big tip to your barista, call an old friend to say hello, hug your mom a little bit tighter; a simple gesture goes a long way.

4. Donate to the victims of the Charlottesville terror attack.

Beyond Heyer's tragic death, the violence on Saturday left 19 others injured. Community group Unity C-ville has set up a GoFundMe page to help with their medical costs.

5. If you're not a person of color, take 10 minutes to learn about allyship.

A 10-minute cram session certainly doesn't mean you'll become the perfect ally overnight. But listening to members of an oppressed group — or learning from resources created by someone or people of that group — will give you a good start in understanding the do's and don'ts in allyship.

6. Speaking of being an ally — signing up for a Safety Pin Box subscription is a great first step.

The service, run by black female activists, informs users about the various systems of privilege and oppression that disempower certain groups, while also giving specific tasks on how subscribers can challenge the status quo as allies in the real world.

7. Find out how your own representatives reacted to Charlottesville.

Then make some phone calls.

If they condemned white supremacy and are actively fighting for policies that promote racial justice — from criminal justice reform to affirmative action — let them know you proudly support their agenda. If your representatives didn't speak out, remind them that their silence speaks volumes.

Racism certainly isn't confined to one party, but the GOP — led by a president who has been disturbingly connected to the KKK and other hate groups — is emboldening bigotry in ways we haven't seen in recent American history.

Progressive group Swing Left is focused on flipping the House in 2018 by zeroing in on swing districts where the GOP is vulnerable. Even if you don't live in such a district, you likely live near one that could use your help.

9. Find a protest in your own community with the Indivisible Guide.

Progressive group Indivisible is mobilizing supporters to take part in local protests in response to the white nationalist gathering in Virginia. Learn more.

This is what 682 events in solidarity with #Charlottesville look like on a map. THIS is America. Find yours:… https://t.co/YB0VcBKZQd
— Indivisible Guide (@Indivisible Guide)1502657914.0

10. Report harassment online, or call on the allies at White Nonsense Roundup to step in.

Social media has become a breeding ground for racist and misogynistic attitudes. If you see others being harassed — or you're being targeted yourself — don't be afraid to report it. (Here's how you can do it on Twitter and on Facebook).

Alternately, if you're part of a marginalized group and feel targeted by others online — or even just find yourself batting away well-intentioned but problematic rhetoric — you can call on White Nonsense Roundup. If you tag the volunteer-run group, they'll jump into the comment thread to defend you and educate other commenters. Because, as the group notes, people of color already have enough on their plates — they shouldn't have to worry about educating the world, too.

11. Tune in to TV shows that tackle important issues of racial and social justice on screen.

The Trump era has given new meaning to series that routinely parse social justice issues via comedy or drama. Shows like "Black-ish," "Dear White People," and "Fresh Off the Boat" aren't just good TV — they're making a positive impact, with people of color working behind the scenes and in front of the cameras to tell their stories. Support these types of series and see what the world looks like in someone else's shoes.

Sessions' racist (and homophobic, misogynistic, and anti-Muslim) history is alarming for many marginalized groups. To help keep him accountable, sign up for Common Cause's Sessions Watch, where you'll get up-to-date notifications regarding his actions as attorney general, as well as ways you can stand up to his agenda.

There's a good chance a Black Lives Matter local chapter is active in your neck of the woods. Find out how you — as a person of color or an ally — can help the movement grow. Aside from donating or attending events, you can Like, comment, and share the messages BLM publishes on Facebook and Twitter.

16. Help Charlottesville rally past this dark period by supporting one of its incredible local nonprofits.

Author and Twitter personality Sara Benincasa shared a thread on Twitter (and then wrote an article in the same vein) listing a number of Charlottesville organizations making their corner of the world a better place.

Or the neighborhood Meals on Wheels.

If we've learned anything from U.S. history, it's that white supremacy can't be stomped out overnight.

It will take years of painful, exhausting work to break down the systems that keep black and brown people disadvantaged at best and, at worst, intentionally oppressed.

We have our work cut out for us. But if America truly is better than what happened in Charlottesville, now's our opportunity to prove it.