Cynthia Nixon really went there when it comes to white people and weed.

The gubernatorial candidate did not mince words. 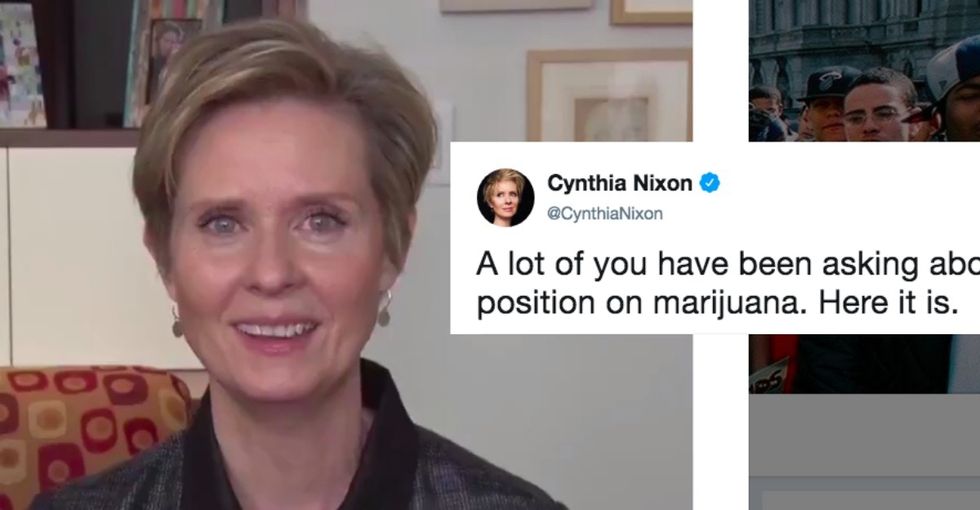 But now, New Yorkers are getting the first glimpses of Cynthia Nixon, the gubernatorial candidate.

In March, the "Sex and the City" star and longtime progressive activist announced her candidacy for governor of New York. She's focused on curbing inequality, stomping out big money influence in politics, and fixing a subway system that's currently in shambles.

She also hopes to end New York's "racist war on drugs" while she's at it.

In a campaign video shared on April 11, Nixon clarified her position on cannabis — and she didn't mince words.

"A lot of you have been asking about my position on marijuana, so here it is," she began. "I believe it's time for New York to follow the lead of eight other states and D.C. and legalize recreational marijuana."

Her reasoning came down to two critical, fact-based points.

1. Let's get real: White people can use weed with little fear of repercussion. It's a different story for people of color.

Despite the fact white people and people of color use marijuana at roughly the same rates, the vast majority of New Yorkers arrested for possession are Black and Latino, as Nixon emphasized.

This form of systemic racism forces a ripple effect onto communities of color. Beyond jail time, a flawed record creates even more barriers to securing employment and housing.

You don't have to look far to see exactly what Nixon is talking about.

"The simple truth is, for white people, the use of marijuana has effectively been legal for a long time," Nixon said. "Isn't it time we legalize it for everybody else?"

2. New York — and every state, really — could put the tax revenue raked in from regulated weed to great use.

Last year, Colorado hit a milestone: It raised over $500 million in tax revenue from marijuana since weed became legal there in 2014. Most of that money went toward funding public schools.

In Oregon, where legal weed hit the market in 2016, sales for recreational cannabis boosted schools, public health, and local governments.

"In addition to ending a key front in the racist war on drugs, regulating and taxing marijuana would generate hundreds of millions of dollars of tax revenue for our people and create important agricultural opportunities for our state," she said.

Legalizing marijuana is the smart and fair choice for leaders aiming to make a practical, positive change.

Their communities could have better schools and fewer people behind bars — as well as one less reason for law enforcement to target people of color for harmless drug offenses.

All those leaders need now is a little bit of nerve.

"If there was more political courage coming out of Albany, we would have [legalized marijuana] already," Nixon said.