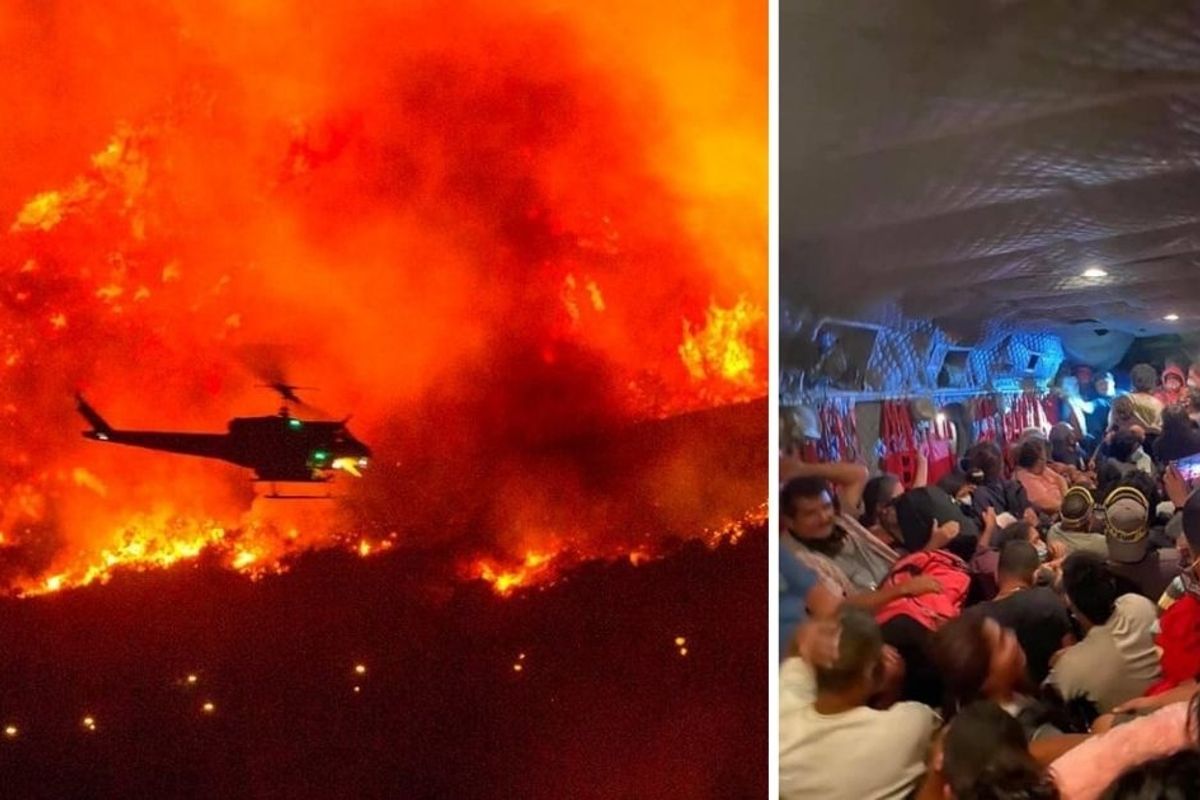 California National Guard crew were sleeping cozily in their beds when they got the call. Dozens of campers were stranded by the Mammoth Lake Reservoir, northeast of Fresno, trapped on all sides by the fast-moving Creek Fire. All exit routes were blocked in the blaze. Firefighters had no way in to get them out.

According to ABC News, the National Guard took two helicopters, a CH-47 and a UH-60 Black Hawk, through the thick smoke and fire to rescue the men, women, and children who had found themselves encircled by fire in the middle of the night. When the helicopters arrived, they found the campers gathered on a dock just 50 feet from the encroaching blaze.

"There are a couple pictures out there and—not bravado—but it was five times worse than any of those pictures," CW5 Kipp Goding, who piloted the Black Hawk, told ABC. "Every piece of vegetation, as far as you can see around that lake, was on fire."

Knowing they were running out of time, they packed as many people as they could onto the helicopters—women and children first—in the first of several trips to retrieve more than 200 campers. Crew members were told they could bow out at any time if they felt it was too dangerous. Though some got nauseous from the smoke, they kept going.

"This was an entire crew, and an entire team decision, to keep on going," Chief Warrant Officer 5 Joseph Rosamond, the pilot of the Chinook, told ABC.

"The conditions were pretty extreme," said Rosamond. "There were points along the route where ... we were just about ready to say that's enough."

Goding, the Blackhawk pilot who had 25 years experience as an Army helicopter pilot, including combat missions in the Middle East, told ABC that it was the No.1 or No. 2 most dangerous mission he'd ever flown.

After the overnight rescue at Mammoth Reservoir Saturday night, the continued helicopter missions as conditions permitted to get other people trapped by the Creek Fire out of harm's way. According to CBS Sacramento, the National Guard ultimately flew 373 people and 16 dogs to safety.

We need this kind of story right now. From southern California to northern Washington, the West Coast is experiencing a catastrophic fire season with no end yet in sight. People in Oregon are sharing surreal photos of apocalyptic red skies midday, a small town in eastern Washington saw 80% of its buildings and homes burn to the ground in a matter of hours, and Californians are battling both record-breaking heat and record-breaking fire loss, with 2 million acres already torched. Even people not directly impacted by fire are impacted by smoke and hazardous air quality.

Here's to the heroes risking their own lives to save others as 2020 continues to bring unprecedented disaster to our doorstep. If we have to deal with natural disasters on top of a freaking plague on top of economic hardship on top of missing hugging our friends, these inspiring examples of humanity and heroism help keep our spirits up.
From Your Site Articles
Related Articles Around the Web
best of humanity
popular