The Soundgarden and Audioslave singer died at age 52. 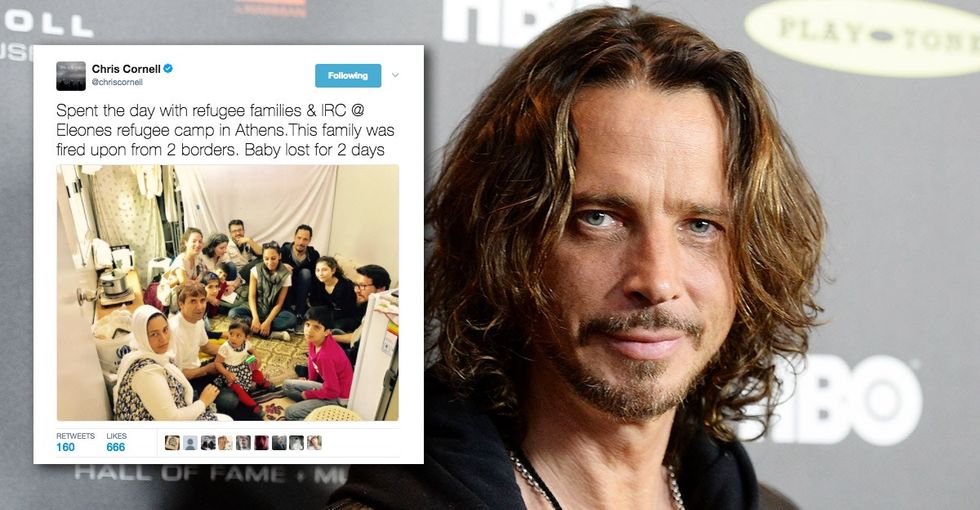 Blessed with the voice of an angel, it's easy to forget Chris Cornell had the heart of one as well.

On May 17, 2017, the singer known for his work with bands like Soundgarden and Audioslave died a "sudden and unexpected" death following a Detroit concert. Cornell's death is being reported as an apparent suicide, leaving behind his three children and wife, Vicky.

As a rock star, he influenced the lives of millions with his art. Lesser known, however, is the life-changing work he did for others offstage.

A 2015 portrait of Cornell. Photo by Casey Curry/InVision/AP.

In April of this year, Cornell traveled to Greece to help refugees. That's just the kind of man he was, using his own resources to help others.

On April 10, Page Six reported Cornell departed from the London premiere of a film to go to an Athens refugee camp.

While there, Cornell met "refugee families and [heard] firsthand the harrowing stories of their escapes, the separation of children from their parents and the stress and uncertainty of day-to-day life," the news outlet reported.

Since 2012, Cornell helped lead the Chris & Vicky Cornell Foundation, a charity dedicated to raising funds to support children facing homelessness, abuse, poverty, and neglect. He'd often set aside a portion of his tour income to go toward the foundation, which would then go to support a variety of child-specific causes.

In the weeks leading up to his death, Cornell was making the rounds on TV shows ranging from "CBS This Morning" to NBC's "The Tonight Show with Jimmy Fallon" performing the title track from "The Promise," a film about the Armenian genocide, an issue close to his heart. All proceeds from the song's sales go to the International Rescue Committee.

The man who inspired countless people to pick up a guitar and start singing can help inspire the world to do something just as important: pay it forward.

"I was lucky enough to be in the right place at the right time to make a career doing something I love," Cornell said, according to a story with Alternative Nation. "Not every kid gets those opportunities. I’m in a fortunate position to use music to support important causes that help foster change."

If you or someone you know is struggling with thoughts of suicide, please reach out to the National Suicide Prevention Lifeline at 800-273-8255.