Check out this cool new ad that businesses can use to show their support for LGBTQ patrons. 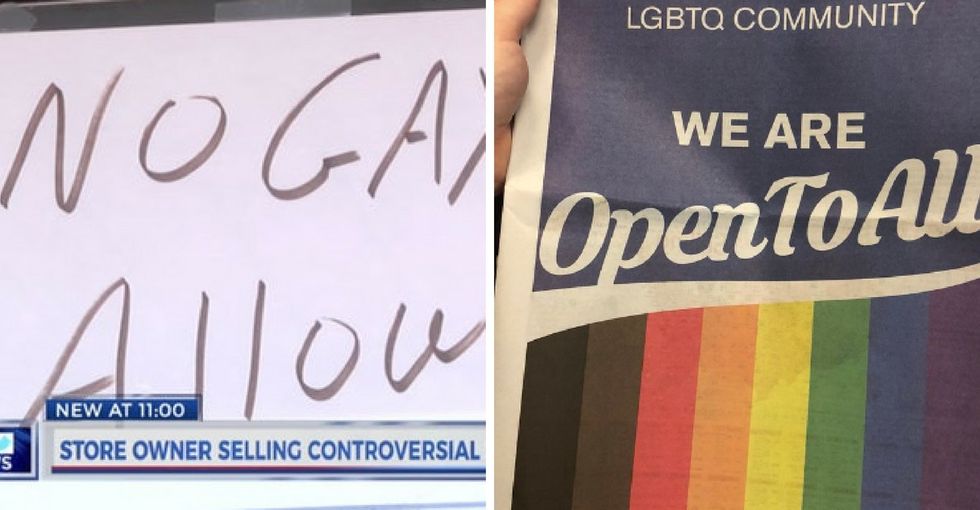 The Supreme Court recently ruled in favor of a Colorado baker who refused to make a wedding cake for a same-gender couple.

Its ruling, however, was particularly narrow and reflective of the specifics in the case. The decision avoided setting any new precedent on if a business owner can discriminate against an LGBTQ patron based on religious belief.

In writing the majority opinion, Justice Kennedy made sure to affirm protections for LGBTQ people, The New York Times reported.

But the misleading narrative that SCOTUS' ruling was "a major victory for religious liberty" — as Sen. Ted Cruz claimed in his tweet below — began to take hold, regardless of the details in the court's decision.

That narrative is music to bigots' ears.

Some anti-LGBTQ leaders and business owners have felt emboldened by SCOTUS' decision.

In a controversial Facebook comment after the ruling, South Dakota Rep. Michael Clark celebrated the development and claimed a business owner "should have the opportunity to run his business the way he wants" — even if it includes refusing to provide services to people of color.

(Clark later walked back the claim.)

Jeff Amyx, who first made waves in 2015 for hanging an abhorrent "No Gays Allowed" sign at the front of his Tennessee hardware store, called SCOTUS' new wedding cake decision a "ray of sunshine."

"Christianity is under attack," Amyx explained. "This is a great win, don't get me wrong, but this is not the end. This is just the beginning."

The Human Rights Campaign (HRC) decided to fight back against the hate by equipping allies in the business world with a simple but effective tool: a sign of their own.

HRC took out a full-page ad in USA Today that reads, "We stand with the LGBTQ community," and "We are open to all."

The ad, as HRC's Charlotte Clymer indicated on Twitter, can be hung in a business' window to ensure queer and trans patrons know they're welcome inside.

The nonprofit also put a downloadable and printable version of the ad on its website and is encouraging supporters to stand in solidarity with the queer community by using the hashtag #OpenToAll on social media platforms.

Moves like this one can make a big difference.

In 2015, after then-Gov. Mike Pence signed a now-infamous anti-LGBTQ "religious freedom" bill into law in Indiana, thousands of businesses pushed back against the discriminatory legislation by placing "This business serves everyone" signs in their storefronts.

That initiative by Open For Service was part of the broad backlash to the law, which was later revised to protect LGBTQ people in employment, housing, and services.

Aside from HRC's sign, there are other simple ways you can ensure patrons know your business is inclusive.

Hang a rainbow flag — as big or small as you'd like — in an area where people will spot it. (They're not just for Pride month, after all. Leave 'em up 365 days a year.)

Let it be known that your restrooms are inclusive of transgender, nonbinary, and gender-nonconforming people. And if your business has only one or two restrooms, why needlessly assign a gender to one or either of them when the facilities can be explicitly all-gender?

Write messages affirming your belief in equality on message boards, menus, and/or customer-facing pamphlets. If you have a space where the community leaves event flyers, include your own LGBTQ-affirming flyers or signs as well. Small but meaningful steps like these can make a difference — not just politically, but on an individual level, too. If you want LGBTQ people to know they're accepted and welcome in your business, speak up!

Vocal allyship is critical in the fight for fairness. Let it be known that you stand for equality.