Can dogs fight against bullying? A lot of kids find relief through Marshall's familiar story. 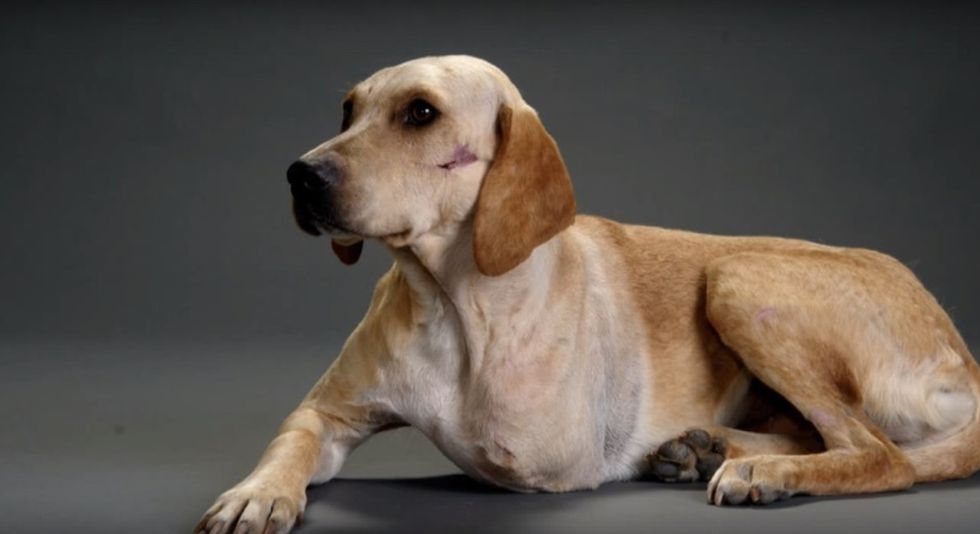 You might be surprised about what you can find in a rescue dog. There are remarkable dogs up for adoption in shelters nationwide who just need to find a home. Here's the story of one of them.

All images and GIFs via Marshall The Miracle Dog/YouTube.

Marshall once had a lot stacked against him.

He was one of over 60 animals rescued in 2010 on an episode of Animal Planet's "Confessions: Animal Hoarding."

Out of all the animals, Marshall was in the worst shape. He'd suffered injuries so bad that his medical team didn't think he was going to make it.

But he did. Little by little, Marshall recovered, even learning to walk on three legs after his broken limb had to be amputated.

Marshall 's owner (center) and the vet who saved him (right).

"(Veterinarians) started calling him a miracle dog because he just persevered and wouldn't quit," said Cyndi Willenbrock, who adopted Marshall from the Humane Society of Missouri.

Realizing children could relate to Marshall inspired his owner to share his story.

Cyndi knew Marshall's journey to overcome his troubled past could resonate with kids who struggled with problems in their own lives. She wrote a children's book about Marshall and used it as a way to talk to kids about courage and acceptance.

She turned this into a larger campaign, called "The Marshall Movement":

"The Marshall Movement serves to carry a universal message of acceptance, tolerance, and kindness. Our goal is to help children recognize, prevent, and speak up when experiencing or witnessing tough social issues such as bullying, peer pressure, abuse, or animal cruelty. The Marshall Movement, with the use of thought-provoking character building programs and activities, strives to provide children with the strength and path to find their own voice. We inspire them to be empowered."

Marshall was also trained as a therapy dog, making it easier to take him into schools to share his story. The training also helped Marshall cope with the anxiety left over from his trauma, and brought him into contact with lots of people looking to give him as much healing love and attention as he wanted to give them.

Marshall hard at work as a therapy dog.

Cyndi also encourages kids to volunteer with animals, or elsewhere, to help them cope with personal problems. In an interview with The Daily Republic, she put it like this:

"I always tell people if they're going through tough times to go volunteer. It's the same thing with animals," says Cyndi. "Having him trained as a therapy dog gave him confidence and exposed him to people in a really safe environment. It really showed him that he does have a purpose to serve. Everyone has a purpose and, more often than not, you find that while giving to others."

If that purpose is belly rubs, Marshall isn't complaining.

The pair now travels around the country to inspire children to be kind to one another and to "act with courage" to end bullying. They've visited more than 450 schools in 25 states and met more than 150,000 students.

Marshall's story is so compelling, it even inspired a Hollywood film about his life!

Hollywood caught wind of this amazing pup's journey and reached out to Cyndi and her husband about creating a film based on Marshall's journey. The movie released on November 16, 2014.

We need more Marshalls in the world.

Sadly, students live in a world that looks like this:

But there are thousands of dogs that may be able to help.

Researchers have found that therapy dogs are great for providing emotional support, but also for teaching kids better ways to interact with one another.

Students can try out "pro-social" behaviors with them, learning to care for the dogs and receiving the dogs' love in return. Practicing commands that the dogs already know is also a great way to instill a sense of responsibility and accomplishment.

They can also help with pervasive issues like anxiety and social skills.

It would be awesome to see more rescued dogs like Marshall get the chance to give and receive the support they once never thought they'd have.

Could your very own Marshall be just a Petfinder search away? Considering adoption could not only save a precious pet's life, but could give untold benefits to you and your family... and maybe even the world — just like Marshall.

Indeed, who has saved whom?!

Watch this video to learn even more about Marshall and how his new life has helped him leave behind his past: