Bill Nye doesn't pull punches when asked if racism has any basis in nature.

This is really good. 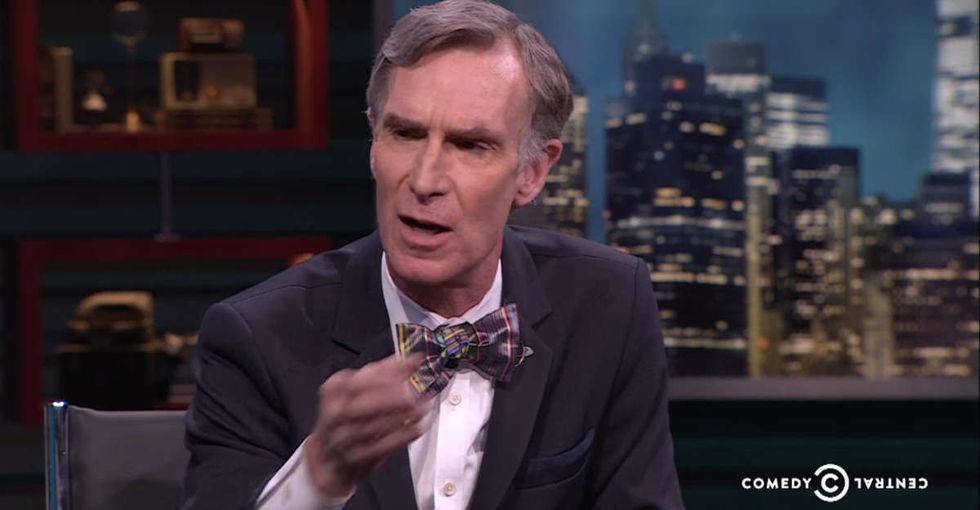 On "The Nightly Show with Larry Wilmore," everyone's favorite science guy Bill Nye broke down exactly why racism is completely and utterly pointless ... with science.

There's no such thing as race.

At least, not biologically. Which is why there is absolutely zero justification for a system that privileges white people over people of color — aka racism.

We're all one species. Our skin tone varies quite a bit, facial features vary, and some of us inexplicably like the band Rush, but those are about the biggest differences.

... get together, and she gets pregnant, it's pretty clear what's going to happen nine months later.

Images by "The Nightly Show with Larry Wilmore."

Although Nye dismisses racism in a few pithy words, he does talk about tribalism quite a bit and how it's totally a real thing. Which begs the question...

What exactly is tribalism?

Basically, it's the whole idea that there's an "us" and a "them."

As one writer explains:

We identify ourselves as members of all sorts of tribes; our families, political parties, race, gender, social organizations. We even identify tribally just based on where we live. Go Celtics, go Red Sox, go U.S. Olympic team! One study asked people whether, if they had a fatal disease, would they prefer a life-saving diagnosis from a computer that was 1,000 miles away, or the exact same diagnosis from a computer in their town, and a large majority preferred the same information if the source … a machine … was local. — David Ropeik, Big Think

Evidence shows that humans have an innate tendency to divide the world into in-groups and out-groups. For much of human history, these groups have been largely defined by skin color. Which has led to non-white people getting the short end of the stick (to, um, put it mildly).

But there's also evidence that we, as humans, can rise above this. And that changing our culture can help us get there.

We are humans, after all. With brains. That think.