Ben Affleck stars in a hilarious PSA about voting in New Hampshire. 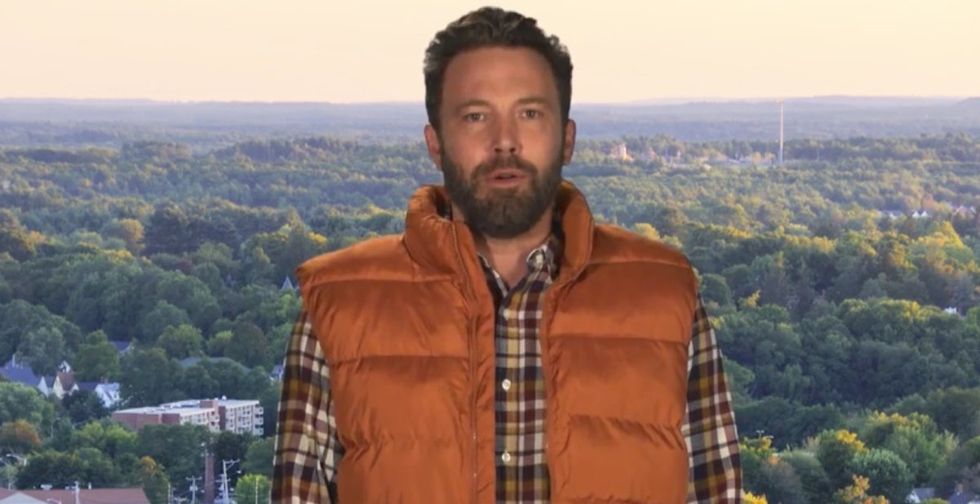 If there's one thing we've learned from the modern history of elections in America, it's that New Hampshire sure is important.

Yes, even the 2016 election, with all of its unusual, uh, let's call them "quirks,"  the Granite State is set to play a key role. It's of the utmost importance that New Hampshirites register to vote and show up to the polls on Election Day.

That's where Ben Affleck comes in, thanks to a new video from Funny or Die and NextGen Climate.

Image via Funny or Die.

In the video, Affleck drops his Rs, breaks out his f-words, and speaks directly to the people of New Hampshire, urging them to get registered.

The famous Bostonian — who jokes that his real name is, apparently, Benny "the Sweet One" O'Callahan — explains how much he loves New Hampshire, aka the perfect place to "go for a drive with your buddies and just, get romantic and watch the fall leaves change color."

New Hampshire is "wicked f***in important" in presidential politics, Affleck says. It's a good place to be if you care about the issues.

If you "give a s***" about women's rights, the environment, or people getting to "piss in the f***in bathroom of their choice," then New Hampshire has your back, Affleck explains. You just have to register and vote.

New Hampshire also stands to be affected by climate change. A report from the White House in 2014 showed that the state's many waterways, lakes, and ecosystems have already shown signs of changing.

While New Hampshire been leaning Democrat in the last few presidential elections, it's still considered a major swing state — making it crucial in elections.

All of that has turned the state into a straight-up battleground in presidential elections, with candidates from every party showing up to shake hands with business owners, chat with governors, and totally mess up the lines at local milkshake places.

“The people from New Hampshire are going to have to register and vote," Affleck explains. "Otherwise this whole damn nation is going to be cursed.”

Oh, and if you're not from New Hampshire, you also need to register and vote. New Hampshirites may have a weight on their shoulders the size of New England, but every vote counts.

We're all in this together, guys.