As an adoptive mom, there are some things that I can't give my daughter. And that's OK. 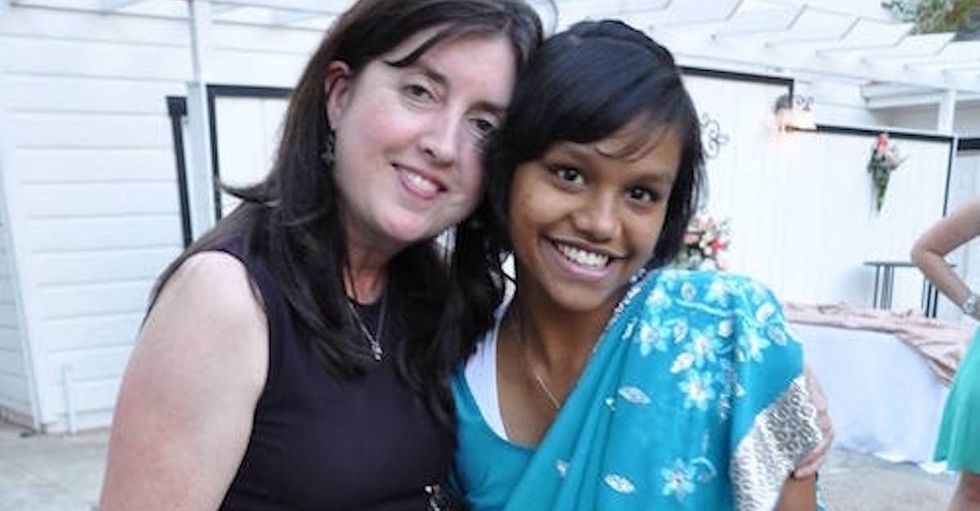 The day I left Delhi with my new 5-year-old-daughter Didi, an Indian “auntie” I’d only just met issued a warning: Take good care of our child.

The unexpected admonishment came from a woman who’d never even seen Didi before but nevertheless felt the right to claim her. The woman’s message felt clear: You are not an Indian, and this Indian girl will never truly be yours.

I’d spent enough time in India to know that offering unwanted advice is a national sport, but still, the stranger’s words pricked. The truth is, in that moment, I scarcely knew this little girl who stood beside me, bravely holding my hand. She was an Indian. I was an American. As soon as we boarded the plane bound for San Francisco, everything she understood about the world would disintegrate.

We didn’t even speak the same language, my daughter and I.

Adopting a child from another culture demands that you incorporate her culture into the identity of your family. My husband and I felt as prepared for this task as any two non-Indians could be. John had visited India multiple times, and I’d briefly lived in the southern city of Hyderabad. I also had Indian relatives by marriage who were eager to be role models for our daughter.

But the list of things I didn’t know was long: Hindi, for starters. The Ramayana. Or how to make roti, or butter chicken, or gulab jamun. Most importantly, I had no idea how to tie a sari, a skill that I was certain that my new daughter would one day want to learn.

They say it takes a village to raise a child — I had no idea how important it would be to have an Indian village to help raise Didi.

By the time Didi reached fifth grade, I’d mastered butter chicken but still couldn’t speak Hindi. Didi had learned English, as international adoptees usually do. What neither of us had learned to do was tie a sari. And as her elementary school dance loomed, Didi announced that a sari was exactly what she wanted to wear.

I offered a million reasons why this might be a bad idea. Saris are hard to move in. A salwar kameez (a long tunic with pants) or a lehanga choli (a skirt, blouse, and scarf set) might be more practical. Most importantly, I couldn’t tie the sari for her, and I suspected I didn’t have the aptitude to learn. I can’t even tie a scarf more than one way.

All photos via Sharon Van Epps, used with permission.

And so I bought my then-11-year-old her first sari, a dress traditionally reserved for adult women in India. Didi chose electric blue with silver embroidery, plus matching bangles, a necklace, electric blue heels, and a package of stick-on bindhis. Once home, we consulted YouTube videos, but of course, there’s more than one way to wrap a sari, and we both ended up confused.

It was time, I realized, to look elsewhere for help. This was a piece of Didi's culture that I simply could not provide.

I asked my cousin’s wife, Priya, if she could help tie Didi’s dress the night of the dance, but she confessed that she wasn’t adept at wrapping herself.

“Why don’t we ask Reya’s mom?” Didi suggested. Reya was the only other Indian girl in the fifth grade, but the girls weren’t especially close. But Reya’s grandmother had once brought Didi a bag of sweet ladoo, and remembering that thoughtful gesture gave me the courage to approach Purvee, Reya’s mom, for some assistance.

“I don’t know,” she said. “Saris are really hard to wear. She may not be able to walk in it. I don’t even like wearing them.”

I agreed with her completely, and then I begged. Donning a sari meant something to Didi that she couldn’t fully articulate.

Purvee relented, inviting us over to her house for a trial run, expecting that once she’d wrapped my daughter up, Didi would realize it wasn't practical. That didn’t happen, of course. Once draped in several feet of satiny blue material, Didi grinned and gleamed like a sapphire.

“This girl was born to wear a sari,” Purvee admitted. “Some people just have a knack for it.”

On the night of the dance, the girls got ready together at Reya’s house. Thanks to Purvee, Didi’s vision for the night came true.

A couple of years later, another occasion arose that Didi deemed worthy of a sari: my cousin Mike’s wedding. I knew I didn't have the skills necessary to help Didi don the dress she so longed to wear. There would be plenty of Indians at this wedding, but they were in the wedding party and too busy to help Didi dress.

But again, our Indian community came through — my aunt Allison volunteered her sister, who recruited her daughter, which is how Didi ended up getting wrapped by the cousin of my cousin, a confusing turn of events that felt culturally authentic. Once again, Didi looked beautiful and confident and the sari didn’t even unravel when she danced to Michael Jackson at the reception.

Last month, when an invitation to a bat mitzvah arrived, Didi again announced that she’d be wearing a sari.

But getting her wrapped was more complicated now — we’d left California for Seattle, where we had no Indian contacts at all.

Without our support system, I panicked. But Didi didn't. “I can do it myself,” she said.

This time, with more hands-on experience, the YouTube tutorials made sense, at least to her if not me. When Didi descended the stairs to depart for her friend’s celebration, she looked perfect — the beautiful and self-assured Indian American I’d hoped to raise. I’d been afraid that day we left India together that I would never be enough. Now I know. I’m not enough — what mother is? — but I’m also not alone.

“The pleats aren’t quite right,” she replied, “but I’m OK with it.”

This article was originally published by Brain, Child and is reprinted here with permission.