After Tesla thought aliens contacted him, he described his 'encounter' to the Red Cross. 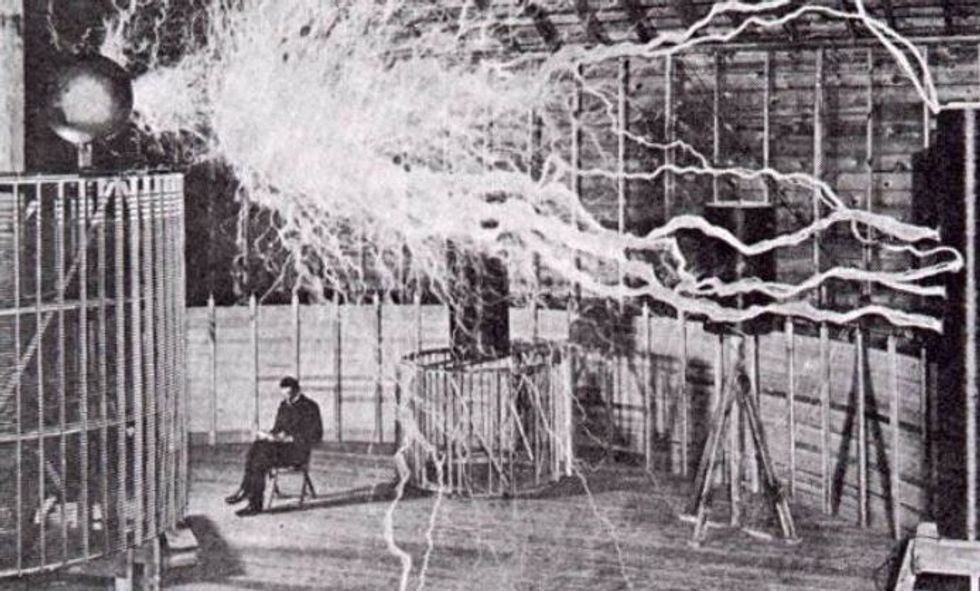 Serbian-American inventor Nikola Tesla (1856 - 1943) completely altered the course of history through his inventions.

The AC system he championed and improved remains the global standard for power transmission. He demonstrated wireless radio communication two years before Guglielmo Marconi and is believed to be the first person to produce an x-ray image.

The image was the result of a botched attempt to photograph Mark Twain.

While Tesla’s scientific discoveries are among the greatest of his generation, the myths surrounding him have turned him into a cult-like figure. Conspiracy theorists believe Tesla created a death ray, a wireless power system that could transmit electricity across the world, and that the government stole all of his research documents after his death.

In 1899, Tesla himself thought he contacted aliens. He heard some rhythmic sounds on a radio receiver and was convinced they were extraterrestrial in nature.

The next year, the Red Cross asked Tesla to predict man’s greatest possible achievement in the next century. He replied by admitting he may have already achieved it by receiving a message from “another world.”

The retrospect is glorious, the prospect is inspiring: Much might be said of both. But one idea dominates my mind. This — my best, my dearest — is for your noble cause.

I have observed electrical actions, which have appeared inexplicable. Faint and uncertain though they were, they have given me a deep conviction and foreknowledge, that ere long all human beings on this globe, as one, will turn their eyes to the firmament above, with feelings of love and reverence, thrilled by the glad news: "Brethren! We have a message from another world, unknown and remote. It reads: one… two… three…"

In a 1910 letter to The New York Times, Tesla claimed the sounds came from Mars.

“Most certainly, some planets are not inhabited, but others are, and among these there must exist life under all conditions and phases of development. Personally, I base my faith on the feeble planetary electrical disturbances which I discovered in the summer of 1899, and which, according to my investigations, could not have originated from the sun, the moon or Venus. Further study science has satisfied me that they must have emanated from Mars. All doubt in this regard will soon be dispelled."