After Kate Spade's death, let's rethink how we talk about suicide. 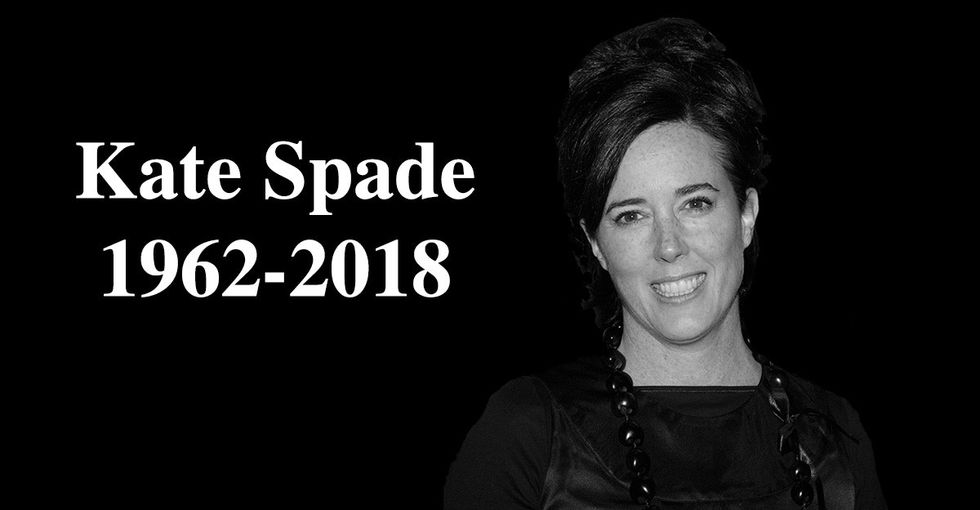 The Associated Press was early to report news of the legendary handbag designer's death. From the outside, she seemed to have it all: a husband/business partner, a 13-year-old daughter, and millions of dollars.

As is so often the case with suicide, however, this view from the outside didn't tell nearly the whole story.

As people paid tribute on social media, some started an important conversation about how we talk about suicide.

Let's face it: Talking about mental health and suicide is never easy. Between the stigma that surrounds it and the struggles some have to get the health care they need, it's easy to just let a lot of commonsense things go unsaid — which only increases the stigma.

On Twitter, a number of people stepped forward to break the silence around the topic.

Empathy was a common theme in many of these posts.

Just another one of those times when you realize you can't even imagine other people's pain. RIP Kate Spade.
— Maris Kreizman (@Maris Kreizman)1528215471.0

Others offered up a simple tip: Check in on family and friends who might feel vulnerable in the wake of this high profile news. A simple, "I just wanted to say hi and see how you're doing" can go a long way.

If you're in a good place to do so, today would be an especially great day to ask someone how they're doing and let… https://t.co/pUKRJlJAps
— Kat Kinsman (@Kat Kinsman)1528217272.0

Another common theme was a reminder that depression isn't always easy to spot in others.

Even worse, some people feel too embarrassed to reach out when they need help, especially those who look outwardly successful. "Kate Spade was an entrepreneurial and artistic force, and all of us know that already," Anne T. Donahue wrote. "But what we don't tend to is what's going on behind the scenes."

Lots of people spoke up to remind those struggling that overcoming embarrassment in order to ask for help is really tough — and that's OK.

Journalist Ana Marie Cox shared the secrets to overcoming that: reminding yourself that you are loved and understanding when to ask for help. You're probably underestimating how many people in your life care deeply for you.

LGBTQ advocate Charlotte Clymer urged people to keep in mind how their words can affect others during times of tragedy. For example, this isn't the time or place to say things like, "Well, I didn't like her bags anyway." Resources like Reporting on Suicide are great for journalists as well as the rest of us.

Another crucial issue many are bringing up is the fact that suicide is a public health issue.

"Depression is a life threatening illness just like heart disease, cancer, or sepsis," tweeted Dr. Eugene Gu. "There should be no stigma about mental health — only treatment, awareness, and compassion."

If you find yourself feeling overwhelmed by these discussions, there's no shame in signing off the internet for the day. Take care of yourself. The world will still be here in the morning.

If you're in a bad place, these organizations are there to help without judgment. There's no shame in calling them up.

Finally, if you know of a friend who is considering suicide, there are some simple things you can do to help them out.

Twitter user @erinscafe shared a great list that tackles the issue. "Be the lifeline they can grab onto if they need it."

Most importantly, STAY IN TOUCH. Suicide rates go down when family and friends follow-up with at-risk individuals.… https://t.co/NXHY4vTEHX
— Scafe for America (@Scafe for America)1528216014.0